Promises of wealth and security are far more contingent than is being advertised.

The Millennial Generation, if we're to believe various polls, aspires to either make boatloads of money on Wall Street, or secure a can't-be-fired job in the government. Given the dominance of finance and an economic backdrop of rising insecurity, these are rational choices.

But all those Millennials hoping to work for Goldman Sachs does raise a question: when did playing financial games become so much more profitable than producing goods and services?

And that raises another question: is the dominance of the FIRE sectors (finance, insurance, real estate) permanent or cyclical?

Let's turn to some charts for answers. The first is a look at the finance and insurance sectors' share of the gross domestic product (GDP). The sectors's share reached 4% of GDP in the stock market bubble of 1929 and the echo bubble in the mid-1930s.

It took 40 years for finance and insurance to exceed the highs of the Roaring 20s bubble. 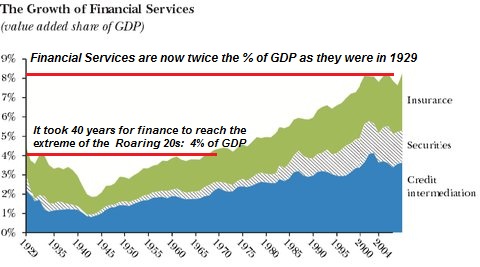 In the 40 years since the early 1970s, finance and insurance have doubled their share of the GDP. Note that since GDP has expanded many times over since 1935, the nominal size of financial services has soared.

Next, let's look at productivity--the engine of all wealth creation--at least in an economy that incentivizes producing goods and services.

It turns out productivity growth collapsed after the oil shock of the early 1970s. But as I note on the chart, it wasn't just the oil shock: the low-hanging fruit of productivity gains generated by mechanization and new technologies had been picked, and the satiation of basic consumer demands led to a post-industrial economy focused more on the profits to be reaped by extending credit so consumers could buy more than their incomes would otherwise allow.

The early 1970s also saw the end of the gold standard and the advent of fiat currencies. 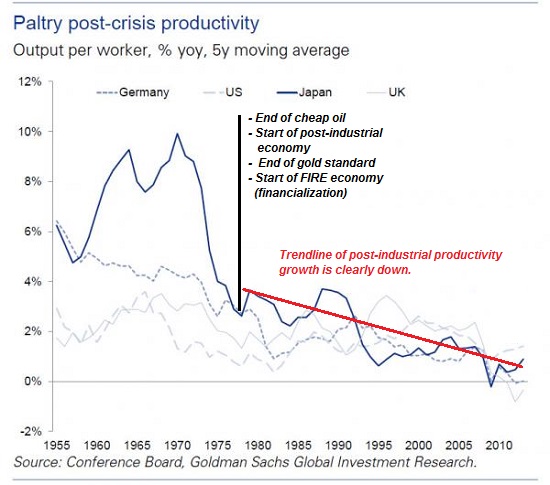 Financialization really only took off, however, in the early 1980s. Broadly speaking, financialization is the substitution of debt for income and the commoditification of debt into financial instruments that could be sold globally, leveraged and hedged with derivatives.

While definitions of financialization vary, mine is:

Another way to describe the same dynamic is: financialization results when leverage and information asymmetry replace innovation and productive investment as the source of wealth creation.

I've also correlated the income levels with America's Nine Classes: the Oligarchy and New Nobility classes are at the top, followed closely by the Upper Caste of technocrats and government Nomenklatura.

After financialization kicked in, the income of the Oligarchy/Financial Aristocracy quadrupled, as their share of the nation's income soared from 2.6% to 10.4%.

The Upper Caste and state Nomenklatura did OK for themselves, earning between 38% and 58% more when adjusted for inflation from 1975 (just before financialization took hold).

Everyone else--the bottom 90%--lost ground. This is not coincidence or just bad luck--it is the direct consequence of financial games becoming far more lucrative than actual productive work.

This reality is so obvious that even the Mainstream Media has finally felt obligated to accept it: Finance Is to Blame for Rise in Inequality (via Jason Y.)

The government has not been a disinterested bystander in the lucrative boom of finance: the state has benefited enormously on several fronts. As profits soared, so did tax revenues. As real estate bubbled up to new heights, local governments saw their property tax revenues explode higher.

In effect, the Millennials seeking employment in Wall Street or the government are looking for work in the same sector, because once financialization implodes, both Wall Street and tax revenues will implode, too.

Those benefiting from financialization would have us believe it is permanent, stable and enduring, when in reality it has dug its own grave. Once the collateral holding up the inverted pyramid of debt and derivatives cracks, the entire pyramid will collapse in a heap of counterparty claims and valuations which no longer have any connection to the real world or the market.

The most modest decline in collateral in 2008 triggered the near-implosion of the financialization machine.

Those benefiting from the machine's appetite for leverage believe they understand its inner workings to perfection. Risk has been eliminated, so we're told, by hedges and government guarantees.

Believe that fairy tale at your own risk. Researchers who closely examined just one part of the financialization machine's shadow banking found little to substantiate the widespread assumptions about the causes of the 2008 Global Financial Meltdown: The Role of "Repo" in the Financial Crisis Researchers look at the effect of banks' off-balance-sheet collateralization of commercial paper in the recent financial crisis.

So if in fact nobody truly understands what triggered the near-collapse of 2008, what supports the current confidence that "it can never happen again"?

Those planning to work for Wall Street or the state might want to look at contingency plans for Life Beyond Financialization. When the underlying collateral finally loses its bubble valuation, the inverted pyramid holding up Wall Street and government tax revenues will collapse.

Promises of wealth and security are far more contingent than is being advertised.