Why Trade Wars Ignite and Why They're Spreading

What ignites trade wars? The oft-cited sources include unfair trade practices and big trade deficits. But since these have been in place for decades, they don't explain why trade wars are igniting now.

To truly understand why trade wars are igniting and spreading, we need to start with financial repression, a catch-all for all the monetary stimulus programs launched after the Global Financial Meltdown/Crisis of 2008/09. 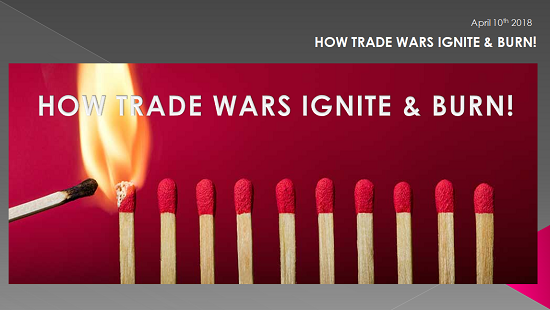 The policies of financial repression force risk-averse investors back into risk assets if they want any return on their capital, and brings consumption forward, that is, encourages consumers to borrow and buy now rather than delay purchases until they can be funded with savings.

As Gordon Long and I explain in the second part of our series on Trade Wars, financial repression generates over-capacity and over-consumption: with credit almost free to corporations and financiers, new production facilities are brought online in the hopes of earning a profit as the global economy "recovers."

Soon there is more productive capacity than there is demand for the good being produced: this is over-capacity, and it leads to over-production, which as a result of supply and demand, leads to a loss of pricing power: producers can't raise prices due to global gluts, so they end up dumping their over-production wherever they can.

If the producers are state-owned enterprises subsidized by governments and central banks, these producers can sell at a loss because their only function is to sustain employment; profitability is a bonus.

Over-capacity, subsidies and over-production force corporations to slash costs to maintain profitability. Cost-cutting is a never-ending process in a world stuffed with too much capacity: labor costs are slashed by offshoring factories and offices; quality is reduced by buying the cheapest low-quality components and scrimping on quality controls, R&D is trimmed and testing is hurried to get the next product cycle out early enough to maintain a slight competitive advantage.

As profits erode due to over-capacity, corporations turn to financial engineering to boost profits: profits come from either accounting trickery or stock buy-backs that reduce the number of outstanding shares.

Meanwhile, consumers have over-borrowed and over-consumed, taking on more debt than would have been possible in the pre-financial repression days.

As a direct result of these stimulus policies, private and public debt loads are expanding at rates far above the expansion of the real economy. This is why we read that each new dollar of debt is generating almost no real-world gains, as debt service consumes most of the "new money."

Over-capacity leads to some nations over-producing, and cheap, easy credit leads to over-consumption in other nations. Both imbalances are the result of vast distortions in the incentive structure of the global economy, distortions created by the policies of financial repression: zero interest rates, ample liquidity, financial engineering, government subsidies for over-production, central bank policies keeping zombie corporations alive and so on.

As these distortions and imbalances start destabilizing domestic economies, political leaders turn to trade wars to stem the erosion of the domestic economy. Trade wars are the inevitable consequence of monetary stimulus that creates perverse incentives to borrow more than is prudent, over-produce, over-consume and use accounting trickery and financial engineering to maintain the appearance of fiscal health.

Thank you, Barney S. ($5/month), for your monumentally generous re-subscription to this site -- I am greatly honored by your steadfast support and readership.