For Freak's Sake, People, Even the Crash Test Dummies Are Nervous

Those trusting the Fed to be visibly weak, corrupt and incompetent forever might be in for an unwelcome surprise.

When even the crash test dummies are nervous, it pays to pay attention. Being in a mild crash isn't too bad if all the protective devices inflate as intended. But in a horrific crash where nothing goes as planned, it's like speeding in a ready-to-explode Pinto and being side-swiped by a semi on Dead Man's Curve.

The stock market is in the Pinto, and the smell of gasoline is so strong it's overpowering the smell of old Cheetos and stale beer. The Federal Reserve is driving, and it's got a crazy glint in its eyes that everyone dismisses-- to their immense regret when the Pinto goes off the cliff and flames envelop the wreckage.

We're talking metaphorically here. The pain of catastrophic financial losses isn't physical. But that doesn't mean it won't hurt for years or even decades.

Here's a brief recap: The Fed says inflation is under control, will soon subside, and is no biggie.

In other words, the Fed believed it wielded Jedi Mind Tricks (to convince the masses that there was nothing to worry about as "this isn't the inflation you're looking for") and that it was living in a Wizard of Oz world in which it possessed supernatural powers: if we say inflation is declining, it will decline.

Put simply, the Fed is completely delusional. If you need more proof, consider their risible claim that Fed policies aren't the cause of soaring wealth inequality, when the evidence that the Fed has destabilized society by boosting wealth inequality to new heights is incontestable to all but con artists and the delusional.

Now that inflation is a raging conflagration, the Fed's threadbare credibility is in tatters. The Fed is a laughing stock, and the only way to restore a few shreds of credibility to crush inflation by whatever means are necessary.

The poor fools in the back seat of the Pinto don't believe the Fed would ever put their beloved stock market at risk. But the Fed has no choice. Of course they're trying another lame Jedi Mind Trick, claiming they can crush inflation and restore their credibility in an imaginary "soft landing," but no one believes this.

The truth few seem willing to entertain is the Fed has to crash the market because there is no other way to restore its shredded credibility. Having blown the opportunity to restore some basic discipline, the Fed has been revealed as 1) delusional, disconnected from reality, drifting in a la-la land of fantasy, and 2) weak, corrupt and incompetent, a bad combination, as it has done nothing but kiss the derrieres of billionaires for years while claiming to serve those it has impoverished (the bottom 90%).

The crash test dummies want no part of the Fed's Pinto Joy Ride to Doom. Maybe the Pinto does a couple of 360 spins and doesn't fly off Dead Man's Curve. Maybe the crash just dents the fender. Those trusting the Fed to be visibly weak, corrupt and incompetent forever might be in for an unwelcome surprise.

For freak's sake, people, wake the freak up. There's no risk in la-la land, but this is reality. Risk is on a SpaceX rocket ride to heights unknown. 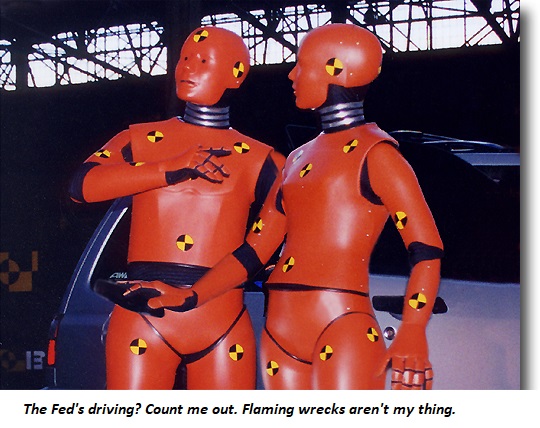