Are there any conditions now that are actually better than those of 2008?

It's tempting to see similarities in last week's global stock market mini-crash and the monumental meltdown that almost took down the Global Financial System in 2008-2009. The dizzying drop invites comparison to the last Bear Market that took the S&P 500 from 1,565 in October 2007 to 667 on March 9, 2009.

But this Bear is beginning in circumstances quite different from 2007-08. Let's list a few of the differences:

1. Then: Markets and central banks feared inflation, as WTIC oil had hit $133 per barrel in the summer of 2008.

2. Then: China had a relatively modest $7 trillion in total debt, considerably less than 100% of GDP.

3. Then: Central banks had a full toolbox of unprecedented monetary surprises to unleash on the market: TARP, TARF, BARF (OK, that one is made up) rescue packages and credit guarantees, quantitative easing (QE), zero interest rate policy (ZIRP) and direct purchases of mortgages, to name just the top few.

Now: The central bank toolbox is empty: every tool has already been deployed on an unprecedented scale. Every potential new program is simply a retread of QE, yield curve bending, asset purchases, etc.--the same old bag of tricks.

4. Then: Central banks had a relatively clean slate to work with. Interventions in the market and economy were limited to suppressing interest rates in the post-dot-com meltdown era.

Now: Central banks have never stopped intervening since 2008. The market is in effect a reflection of 6+ years of unprecedented central bank interventions. Rather than a clean slate, central banks face a global marketplace that is dominated by incentives to speculate with leveraged/borrowed money established by 6 years of central bank policies.

Now: The Fed Funds Rate has been screwed down to .25% for 6+ years--an unprecedented period of near-zero interest rates.

Now: The U.S. dollar began a 20% increase in mid-2014, in the midst of what was generally perceived as a solid global expansion. 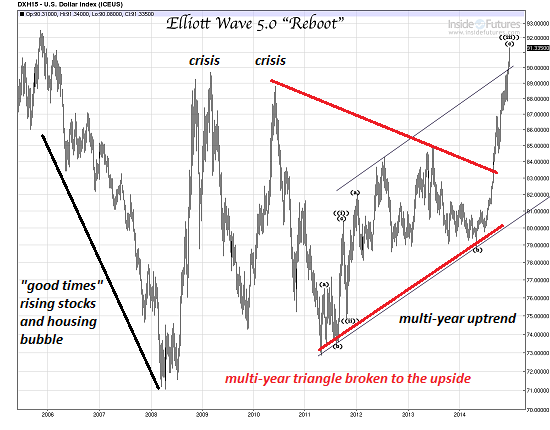 Now: The rising dollar has crushed the overseas profits of U.S. corporations. The soaring USD has also crushed emerging market currencies and stock markets, and forced China to devalue its currency, the the RMB (yuan)--a devaluation that triggered the current global meltdown in stocks.

Now: Central bank policies are recognized as engines of inequality that have widened income and wealth inequality for 6+ years.

Are there any conditions now that are actually better than those of 2008? Or are conditions now less resilient, more fragile and more dependent on unprecedented central bank interventions?