The Troubling Decline of Financial Independence in America

If you can't work for yourself and afford health insurance, something is seriously messed up.

Indeed, it could be argued that financial independence is the American Dream because it gives us the freedom to say Take This Job And Shove It (Johnny Paycheck).

This chart shows the self-employed as a percentage of those with jobs (all nonfarm employees). According to the FRED data base, there are 142 million employed and 9.4 million self-employed. (This does not include the incorporated self-employed, typically physicians, attorneys, engineers, architects etc. who are employees of their own corporations.) 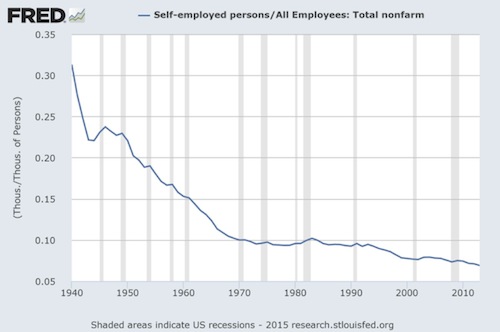 This chart depicts self-employment from 1929 to 2015. Self-employment plummeted after World War II as Big Government and Big Business (Corporate America) expanded and the small family farmer sold to agri-business or went to the city for an easier living as an employee of the government or Big Business. 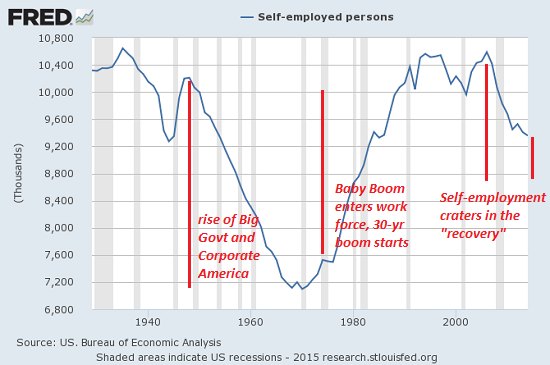 Self-employment picked up as the bulk of 65 million Baby Boomers entered the work force in the 1970s. Not entirely coincidentally, a 30-year boom began in the 1980s, driven by financialization, technology and the explosion of new households as Baby Boomers got jobs, bought homes, etc. These conditions gave a leg up to self-employment. 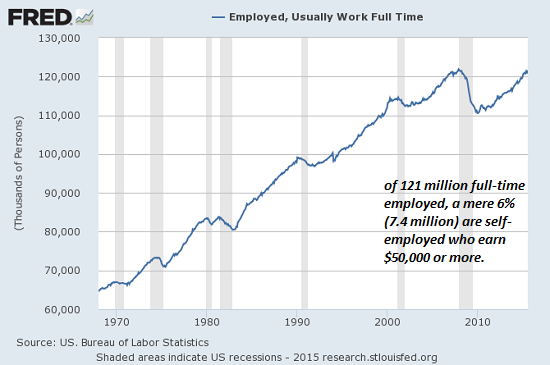 Financial independence means making enough income to not just scrape by but carve out a modestly middle-class life. If we set $50,000 as a reasonable minimum for that standard (keeping in mind that households with children recently estimated they needed $200,000 in annual income to get by in San Francisco), we find that according to IRS data, about 7.4 million self-employed people earn $50,000 or more annually.

There are a number of reasons for the decline of financial independence/self-employment. I cover the fundamental changes in the economy in my book Get a Job, Build a Real Career and Defy a Bewildering Economy.

But there are other less structural reasons, such as nonsensically complex and costly regulations--a topic explained here recently by entrepreneur Ray Z. in Our Government, Destroyer of Jobs (August 12, 2015).

As many readers pointed out, these complexity barriers limit competition to Corporate America chains and provide make-work for government employees and politically protected guilds.

This reality is described in Health Care Slavery and Overwork (via Arshad A.)

True financial independence is probably even scarcer than these bleak numbers suggest. As a self-employed person myself, I have to pay my own healthcare insurance costs --a staggering $15,300 per year for bare-bones coverage for the two of us (no meds, eyewear, dental, $50 co-pay for everything, etc.).

Only 3.9 million taxpayers took the self-employed health insurance deduction. That's a pretty good indicator of how many taxpayers are actually living solely on their income, that is, they don't have a spouse who has family healthcare coverage via a government or corporate job.

That's a mere 2.7% of all 142 million employees. If you can't work for yourself and afford health insurance, something is seriously messed up.