Our Systemic Drift to Collapse

Thus do the lazy complacent passengers drift inexorably toward the cataracts of collapse just ahead.

The boat ride down to the waterfall of systemic collapse is not dramatic, it's lazy drifting: a lazy complacency that doing more of what worked in the past will work again, and an equally lazy disregard for how far the system has drifted from the point when things actually worked.

In my analysis, decoherence refers to the loss of systemic coherence between narratives, values, processes and systems. Simply put, stuff no longer works and it no longer makes sense, but we've lost sight of this disconnect because the systemic drift has been so gradual that the memory of a time when things actually worked has been eroded to the point of total loss.

What remains is a limbic tropism to keep doing more of what's failed spectacularly because it once worked and therefore should work. In other words, our system has lost the ability to adapt to changing circumstances; the only menu of responses to a novel challenge is the same old menu of policies designed 50 or 75 years ago.

Our system's policy response mirror's Hollywood's reliance on old franchises. Every comic book superhero has been mined to exhaustion, and Disney continues sinking deeper shafts to extract the last dregs of "value" from the 43-year old Star Wars franchise.

1. Systems that evolved to function in a specific socio-political-economic context 50 or 75 years ago continued adding complexity and cost because debt-based funding was available, not because they were becoming more efficient or effective.

There hasn't been any fiscal discipline anywhere in the system for decades. Debt-serfs can always "save themselves" by borrowing more and refinancing their old debt. The possibility that there is an end-game to this artifice is discounted; a collapse in debt when we can print as much money as we want is "impossible."

2. The socio-political-economic context has changed and so the status quo systems are mal-adapted, i.e. obsolete, but all the entrenched interests are so wedded to preserving everything as-is that the system can only respond incoherently: doing more of what's failed spectacularly.

3. Systemic drifts occur so slowly that we aren't even aware of the loss of coherence unless we compare the current system to a previous set point or look at it from the perspective of starting from scratch: what would the most sustainable, most efficient and productive system look like if we designed it from scratch?

It certainly wouldn't be the system we have now, but those benefiting from the current system will never allow any real change lest their feeding trough receive less slop.

One common-sense set point is the number of hours of labor required to buy X: a car, groceries, a college education, a house, healthcare insurance, etc. As the chart below illustrates, by this set-point the vast majority of households have lost significant ground in the past 35 years.

A second common-sense set point is the durability of everyday appliances and tools. I've often noted the collapse of durability in household appliances. Quality of goods and services is in decline across the board, with few exceptions.

A third common-sense set point is institutional competence and transparency. Major institutions simply don't function effectively or efficiently, and they are impervious to reforms or demands for improvement. The default is now poor service and sky-high prices, self-serving insiders, and obfuscation and denial rather than transparency.

The system's narratives, values and processes no longer align. The grandiose claims that characterize our narratives do not manifest in the values and processes of our institutions. Rather than expose the system's profound decoherence, every effort is poured into changing the metrics to protect entrenched interests and promote a derealizing propaganda that not only is everything going great, ours is the best system in the known Universe.

Thus do the lazy complacent passengers drift inexorably toward the cataracts of collapse just ahead. The noise of the falls is being masked by the chaotic din of oh-so-carefully edited social media and other screen-based media, and so the coming collapse remains "impossible" and "unexpected." 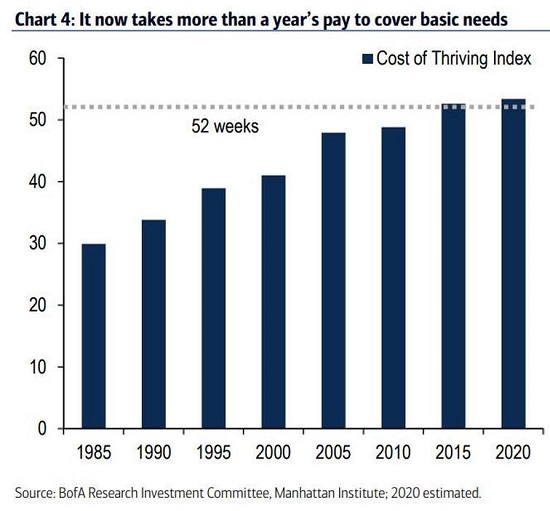 source: The Devastation Of The Middle Class: It Now Takes 53 Weeks Of Median Wages Every Year To Pay For Basic Needs (Zero Hedge)