The Real Story of America Abandoning the Gold Standard

It's widely held that all of our financial woes are the result of abandoning the discipline of the gold standard in 1971. The premise here is that if the U.S. had maintained the gold standard, the excesses of the fiat currencies regime could not have arisen.

The real story is the U.S. was hemorrhaging gold in the 1960s at such a rate that America's entire gold reserves would have disappeared by 1976 - 1978. Other nations converted their dollars into gold at a furious pace, draining America's gold reserves. Once your gold is gone, you can't have a gold standard. (see chart below.)

The real story is complex. It has a lot of moving parts that are critical to understanding the gold standard and fiat currencies. A good starting place is this essay from the Federal Reserve Bank of St. Louis: The Changing Relationship between Trade and America's Gold Reserves.

To understand currencies, we must start with Triffin's Paradox, which I've covered for years. (For example, What Will Benefit from Global Recession? The U.S. Dollar October 9, 2012).

The core of Triffin's Paradox is that there is an intrinsic tension between international and domestic demands for the currency. As this essay observes: "Monetary policy can focus on its international responsibilities (i.e., maintaining fixed exchange rates and parity of notes with the value of gold) or focus on the domestic economy--but not both."

The authors describe how central banks reversed the erosion of their gold reserves (i.e. outflows of gold) by raising interest rates on their Treasury bonds, enticing foreigners to exchange gold for the higher yields.

But as we see today even in the fiat era, raising bond yields to support the nation's currency harms the domestic economy by making credit more costly. Simply put, in either a gold standard or fiat currency regime, you can't have it both ways. Either fiscal-monetary policies support the nation's currency internationally or serves domestic needs, but it can't sustainably do both.

As I've pointed out recently, the dominant policy driver in the U.S. from 1946 to 1991 was the Cold War with the Soviet Union (USSR). A key component of the Cold war was supporting the rebuilding of allies' war-ravaged economies (via the Marshall Plan and other policies) and most importantly, by keeping the vast American market open to our allies' exports.

In other words, the U.S. encouraged the rise of mercantilist economies (i.e. export-driven) in Japan and Germany and other Eurozone nations to bolster allies' rapid recovery and growth. As long as allies prospered, the attraction of the Soviet Union's ideology dimmed and allied economies could support larger defense expenditures to counter any Soviet invasion.

But this had a cost: to provide rapidly expanding international economies and trade, the U.S. had to export dollars to fund this expansion, and to export dollars one must run a trade deficit: America imported goods and exported dollars.

Running trade deficits was thus not a purely economic decision, it was geopolitical and of the greatest importance. The domestic cost of opening the U.S. market to mercantilist allies had to borne as part of the many sacrifices demanded by the global Cold War with the Soviet Union.

This essay offers a useful summary of how World War I destabilized the international gold standard, and how efforts to restabilize it failed. The enormous debts incurred by the European powers to fight WWI made it impossible to attract gold to rebuild reserves with high bond yields, as tight credit led to domestic depressions. Germany's attempt to inflate away their crushing war debts also ended disastrously in hyper-inflation.

By the postwar era, the U.S. held 2/3 of the world's gold reserves. This led to the Bretton Woods agreement in which the U.S. was the only nation that made its currency convertible to gold.

By the late 1950s, as this chart shows, other nations started converting dollars into gold at an alarming rate. The U.S. was still running small trade surpluses, so this depletion wasn't driven by large trade deficits. It was simply an extremely imbalanced global monetary scheme returning to a more balanced arrangement: the extraordinary dominance of the U.S. was not sustainable or healthy in terms of dynamic equilibrium. 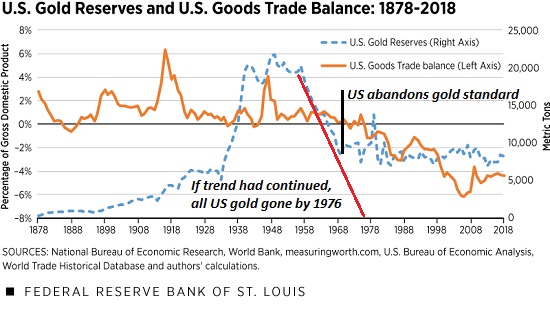