The Crisis of Capital

The undeniable reality of the 21st century economy is that capital has gained while labor has stagnated. While various critics quibbled about his methodology, Thomas Piketty's core finding--that capital expanded faster than GDP and wages/salaries (i.e. earned income from labor)--is visible in these charts.

Real wages have gone nowhere for decades. Only the top 5% of wage earners have outpaced inflation's erosion of the purchasing power of their earnings. 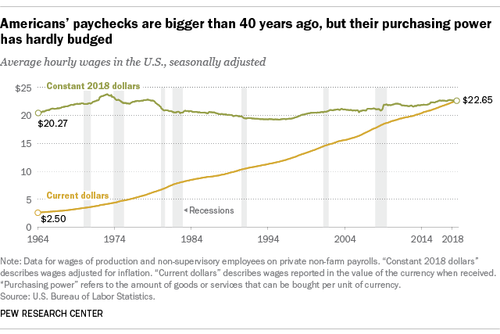 Household net worth has soared $60 trillion while GDP expanded by $9 trillion. Compare the relative growth trajectories of the economy and net worth of assets. Clearly, capital has expanded at rates far above the expansion rate of the economy. 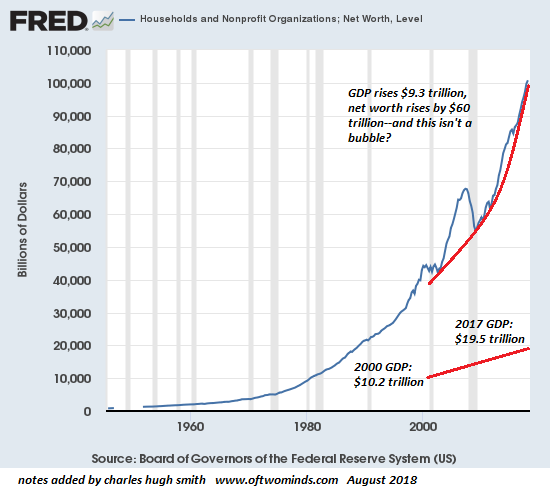 Assets (capital) have exploded higher while real-world inflation (including wages) has remained in line with GDP growth: modest at best. 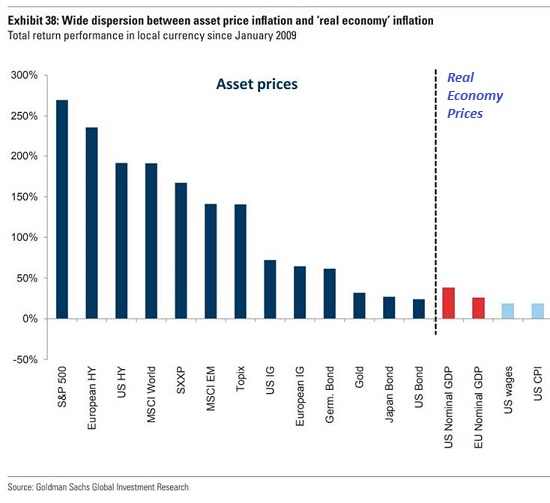 Courtesy of Lance Roberts and Real Investment Advice, here is a chart of total leverage and the S&P 500 stock index. Leverage / debt hasn't pushed wages higher, but it's certainly pushed stock valuations to the moon. 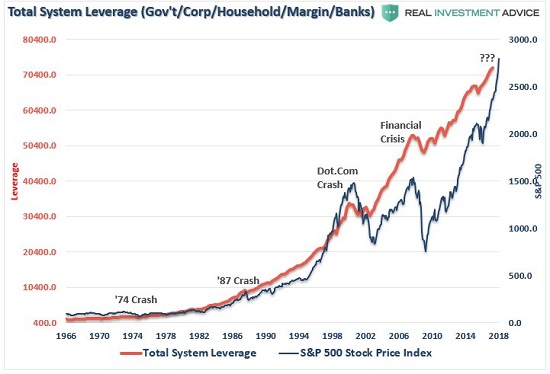 While labor / earned income is clearly in a systemic crisis, so too is capital, though it may seem as if capital is far from danger.

Capital's crisis has several sources. One is the financial system, from pension funds to passive index-fund investors to hedge funds to government tax revenue projections, has become dependent on outsized capital gains for its stability.

Any extended period of low growth rates for capital or--perish the thought, sustained losses-- will destabilize every financial structure that is counting on a projection of current returns far into the future.

A second crisis is brewing as central bank-goosed risk-on assets become too risky to hold. Risk-on assets include stocks, high-yield bonds, real estate and leveraged derivatives such as futures. Over the past decade, central banks effectively pushed capital into these risk assets by reducing the return on safe havens such as government bonds to near-zero.

To qualm capital's fears of the risks embedded in such asset classes, central banks established a floor under these assets, the so-called Fed put: should these assets start declining, central banks implicitly promised to open the flood gates of liquidity and start buying these assets directly to shore up markets and restart the upward ascent of valuations.

Now that central banks are reducing this implicit backstop, capital is naturally becoming wary of being trapped in illiquid markets (i.e. markets where bids disappear and positions cannot be sold as buyers have vanished) and Bear Markets in which risk-on assets lose value despite the occasional sharp rally.

The third crisis is malinvestment and low returns on long-term investments: by favoring short-term gains in risk-on assets, central bank policies have created perverse incentives to buy empty commercial buildings and flats and borrow stupendous sums to fund stock buy-backs--completely unproductive uses of capital that generate zero gains in productivity, which is the ultimate source of "wealth" and widespread prosperity.

Put another way: instead of seeking moderate gains via long-term investments in new materials, new industrial processes and new efficiencies, capital has been "trained" (incentivized) to flow into speculative markets for quick gains, or into markets backstopped by central banks, rather than into productive investments that benefit the economy and citizenry.

In other words, capital should be a key source of gains in productivity that benefit everyone. Trained to seek outsized returns in backstopped (i.e. distorted) markets stripped of price discovery and quasi-monopolies defended by central states, capital has lost the appetite and the knowledge base needed to pursue long-term productive investments.

Together, these three dynamics render capital increasingly vulnerable to catastrophic losses as backstops and distorted markets fail and productive investments go begging because they can't promise the outsized returns from speculation capital has come to expect as its birthright.


My new book Pathfinding our Destiny: Preventing the Final Fall of Our Democratic Republic is discounted ($5.95 ebook, $10.95 print): Read the first section for free in PDF format.


If you found value in this content, please join me in seeking solutions by becoming a $10/month patron of my work via patreon.com.