What happens when America finally admits its middle class is a phantom of feel-good fantasy? We may well find out in the next four years.

Of the many things we cannot bring ourselves to admit, one of the most consequential is that our vaunted middle class is illusory, a phantom of our imagination rather than a reality. The reality is the vast majority of the nation's wealth and income has been diverted from the middle class to those at the pinnacle of the wealth-power pyramid and the technocrat / financier insider class (the top 10%) that serves the interests of those at the pinnacle.

This transfer has accelerated rapidly in the 21st century as virtually all the real income gains of the past 20 years have flowed to the top 0.1%. This RAND study found that America's elites siphoned $50 trillion into their own pockets in the past two generations: Trends in Income From 1975 to 2018. (Please look at the "Fruits of Financialization" chart below.)

If the top 10% own 90% of the wealth and has captured virtually all the income gains of the past 20 years, then isn't it obvious America has no middle class? What the traditional middle class--generally defined as the 50% between the bottom 40% and the top 10%--own is debt and a feeble grasp on very thin reeds of capital.

Please ponder the chart below of the $1.7 trillion in student loan debt burdening those who bought the narrative that a college diploma was a passport to the security of the middle class. The debt load carried by those clinging on to aspirations of middle class security is staggering. As I've noted here before, burdening powerless students with uncertain futures with trillions in high-interest debt would have been viewed as criminal two generations ago, but now it's celebrated by those reaping the interest from precariat debt-serfs.

Broadly speaking, the key assets of the middle class are capital and agency, with capital being defined as financial, intellectual and social capital that generates income, earned and unearned, and agency defined as control over one's life and options and having a say in public decision-making.

Understood in this way, the 50% between the bottom 40% and the top 10% own precious little income-producing capital and possess very little agency. The political class serves the top 0.1% and only gives lip-service to the PR-worthy convention of a middle class in the form of platitudes. In terms of control over one's options, those claiming middle class status cling to jobs because they need the healthcare insurance coverage provided by the employer, not because the job is rewarding.

As for possessing skills, much of the workforce has few producer skills, as the consumer economy devotes inordinate attention not to producing but to marketing, speculation and complying with counterproductive regulations and bureaucratic file-shuffling.

Once the con of printing trilions of dollars out of thin air dissolves and the nation has to balance its books in the real world, these file-shuffling and speculative skills will no longer generate meaningful income.

The last vestiges of financial security for the middle 50% are pensions and ownership of a home, which is less a real asset and more a call-option on the current housing bubble. This phantom "wealth" is one encounter with reality away from disappearing into the mists of speculative extremes imploding.

As for pensions, these promises on future energy and income gains are only geared for an economy of ever-expanding energy, productivity and production of surplus goods and services. As America has substituted speculation for these real-world gains, pensions are also one encounter with reality away from disappearing into the mists.

The American Dream was based on broad-based access to acquiring capital and agency, access which has narrowed to the top slice of the economic order. Even the top 10% is misleading, as the vast majority of capital and agency are held by the top 1% and to a lesser degree, the top 5%. The actual capital and agency of those below the 5% mark falls off rapidly, effectively reaching near-zero about the 15% mark.

As the chart "wages aren't keeping up" shows, the purchasing power of "middle class" wages has plummeted, meaning less income is available after paying all the big-ticket essential expenses. The Federal Reserve has played a game of lowering interest rates so households can lower their interest expenses by refinancing their mortgages, but this game has ended; interest rates cannot drop any further without entering negative rates, a zone of insolvency for the banking sector.

In other words, the game of creating the illusion of real wage gains is over.

What happens when America finally admits its middle class is a phantom of feel-good fantasy? We may well find out in the next four years. 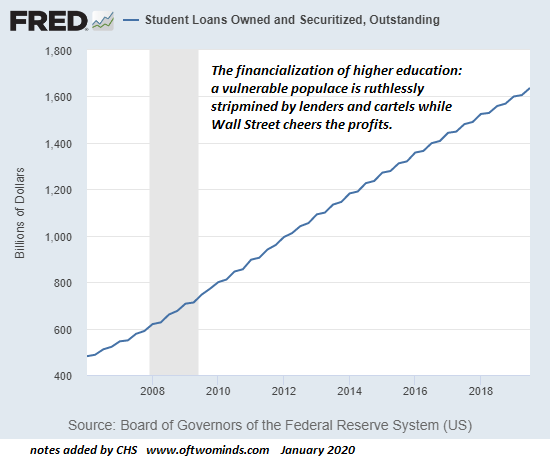