The point I'm making with the $10 trillion stone coin is that if money is a social contrivance, then it should be distributed to those creating goods and services.

This difference is known as seigniorage. The federal government could then spend the $1 trillion without having to borrow the money by selling Treasury bonds--the usual mechanism for funding federal deficit spending.

The idea was originally proposed as a way of avoiding more federal borrowing: rather than borrow another $1 trillion to fund federal spending, the Treasury would be handed $1 trillion in freshly created cash as seigniorage proceeds from the $1 trillion coin.

Is the idea legal? Some scholars say yes, others are doubtful.

Some observers have suggested minting a $1 trillion platinum coin and having the Fed buy it as an asset--in effect, replacing $1 trillion in interest-bearing Treasury bonds with the $1 trillion coin.

The $1 trillion coin is interesting, but given the size of the nation's debt and the relatively unimpressive size of the coin itself, I propose a $10 trillion stone coin, which could be purchased from the island of Yap for considerably less than $10 trillion. 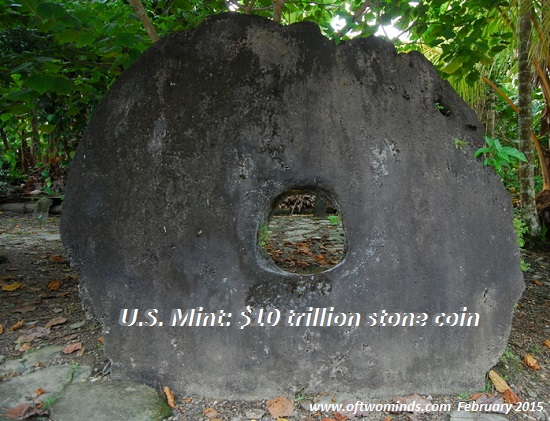 The coin could be sited somewhere on the Mall in Washington D.C., where it might become a tourist attraction.

In Yap, these are known a Rai stones, and they are money in the sense of being a store of value that can be transferred via oral history rather than physically moved.

Thus the $10 trillion stone coin could actually remain on Yap and serve its purpose equally well. However the potential value of the stone coin as a tourist attraction probably makes its transport to D.C. a worthwhile investment.

Here's how the $10 trillion stone coin works: the Mint duly issues one $10 trillion coin and transfers the $9.95 trillion seigniorage (recall that there are shipping costs from Yap to D.C.) to the U.S. Treasury.

Compare this with the current method of creating money out of thin air--the Fed creates the money and then distributes it as free money for financiers to speculate with. As Paul Krugman has observed, "money is a social contrivance." Right now, we create money to enrich the already wealthy. That's how we use our social contrivance--to widen the social divisions of the nation.

I have already proposed using newly created social contrivances (money) to eliminate all Social Security taxes on employees and employers: How About Ending Social Security and Paying Retirees with Cash? (November 15, 2013).

The dangers of creating trillions of dollars out of thin air are obvious. When money is "free," there is no discipline to insure the money is invested or spent wisely. Waste and fraud are as good as prudent investing in the Keynesian Cargo Cult distribution of credit to wealthy financiers. Vested interests with influence over federal spending are delighted to increase their share of the swag, further enriching Elites.

If creating money is such a good idea, why not let all of us do so? Why not let everyone print as much as they need to get what they want?

The answer is of course runaway inflation, as money that can be issued by everyone in unlimited quantities is instantly rendered worthless.

The point I'm making with the $10 trillion stone coin is that if money is a social contrivance, then it should be distributed to those creating goods and services, not those with influence over easily-bought politicos.