U.S. Healthcare and the Tragedy of the Commons

When the system is set up to encourage maximizing self-interest, accountability for the whole is lost.

The lessons drawn from the U.S. healthcare system's failures can be fruitfully applied to a variety of large-scale problems around the world. Let's start with an insightful look at the fixes that have largely failed to rein in costs and improve actual care/patient health.

"Physician Praveen Arla is witnessing a reversal of health care fortunes: Poor, long-uninsured patients are getting Medicaid through Obamacare and finally coming to his office for care. But middle-class workers are increasingly staying away.

"It's flip-flopped," says Arla, who helps his father run a family practice in Hillview, Ky. Patients with job-based plans, he says, will say: " 'My deductible is so high. I'm trying to come to the doctor as little as possible. … What is the minimum I can get done?' They're really worried about cost."

It's a deep and common concern across the USA, where employer plans cover 60% of working-age Americans, or about 150 million people. Coverage long considered the gold standard of health insurance now often requires workers to pay so much out-of-pocket that many feel they must skip doctor visits, put off medical procedures, avoid filling prescriptions and ration pills — much as the uninsured have done." 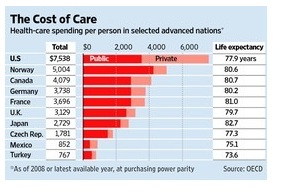 While I have often discussed unintended consequences of centralized policies such as ObamaCare, my focus today is how U.S. healthcare perversely reflects the Tragedy of the Commons, the seminal paper by Garrett Hardin which described the failure of the market to value/price communally owned assets, i.e. "the commons."

Here is a basic example of the dynamic: Each individual farmer will graze his cattle/sheep on the communally owned pastures ("the commons") to boost his own profit, since the commons are "free".  This exploitation of what the market has determined is "free" leads to overgrazing and the destruction of the commons--a huge loss to the entire community as well as to the farmers who were grazing their animals in the commons.

When everyone sees the commons as "free for the taking," then the commons is soon destroyed for all.

To the degree that Central State (federal) revenue is a form of public commons (since it is collected from taxpayers), the siphoning of that resource to serve individual gain leads to the loss of the commons, as well as the loss of any notion of the "common good."

This dynamic is reflected in the extraordinary expansion of healthcare's share of the national economy, from 5% to 18% (on its way to 20%). While healthcare for practioners is about patients, from the financial point of view, healthcare is focused on increasing revenues and profits by whatever means are necessary.

Financially, the commons (tax revenues) are being stripped by those with the most political power.

Though we don't normally think of the health of a nation's citizens as a commons, I think this makes a lot of sense. After all, the healthier a population is, the more productive and happy it will be, and that serves the interests of the nation and its citizenry.

From this perspective, we have to ask if the enormous expense of healthcare is improving the health and happiness of the populace as much as it could, were it spent more effectively.  I think it is fair to say that the overall health of the U.S. populace is actually declining, despite modest advances in longevity and survival rates.

This does not reflect any lack of effort from the often-overworked  providers--rather, it seems to reflect a deterioration of the populace's own habits and lifestyles, and the lack of focus and accountability of the entire system.

We can trace this failure to the Tragedy of the Commons: when every participant is driven to seek maximum gain from exploiting the commons for their own interests, no one is accountable for protecting the commons as a whole.

When we ask, who is responsible for improving the overall health and well-being of the citizens, we get an answer that boils down to: everyone and no one.

Put another way: if I concern myself with the health of the commons (or the overall health of the populace), I earn nothing for this work. Even worse, while I devoted myself to the common good, someone else increased his herd grazing the commons. I will eventually be forced to either join in the exploitation or go broke.

That's the Tragedy of the Commons dynamic, and I think it applies to many systems around the globe.

For more on this topic: The Slide to Collapse Is Greased with Self-Interest (August 4, 2014)


This essay was drawn from Musings Report 5 (2015). The weekly Reports are sent exclusively to subscribers and major contributors ($50 or more annually).