Our Approaching Winter of Discontent

The tragedy is so few act when the collapse is predictably inevitable, but not yet manifesting in daily life.

That chill you feel in the financial weather presages an unprecedented--and for most people, unexpectedly severe--winter of discontent. Rather than sugarcoat what's coming, let's speak plainly for a change: none of the promises that have been made to you will be kept.

This includes explicit promises to provide income security and healthcare entitlements, etc., and implicit promises that don't need to be stated: a currency that holds its value, high-functioning public infrastructure, etc.

Nearly "free" (to you) healthcare: no.

Social Security with an equivalent purchasing power to the checks issued today: no.

As for the implicit promises:

A national currency that holds its value into the future: no.

High-functioning public infrastructure: maybe in a few places, but not something to be taken for granted everywhere.

A working democracy in which common citizens can affect change even if the power structure defends a dysfunctional and corrupt status quo: no.

A higher education system that prepares its graduates for secure jobs in the real-world economy: on average, no.

Cheap, abundant fossil fuels and electricity: during recessionary head-fakes, yes; but as a permanent entitlement: no.

High returns on conventional capital (the kind created and distributed by central banks): no.

A government that can borrow endless trillions of dollars with no impact on interest rates or the real economy: no.

Pay raises that keep up with real-world inflation: no.

You get the idea: the status quo will be unable to keep the myriad promises made to the public, implicitly and explicitly. The reason is not difficult to understand:

Governments jealously protect their right to create currency ("money") out of thin air. This is known as seigniorage. Technically, it's the profit earned by issuing "money" with a market value above the cost of production. For example, if a $100 bill costs 10 cents to produce, the central state's seigniorage is $99.90.

(Central banks are part of the central state. Even though America's central bank, the Federal Reserve, is privately owned, it nonetheless functions as the federal government's central bank.)

Funding all these ever-expanding promises with cash would require higher taxes. Any attempt to trim the gravy train promised to one group will arouse that constituency to a frenzy of lobbying and noisy proclamations of disaster if even a penny of their promised gravy train is cut.

As for raising taxes, not only is that politically unpopular, it has an economic impact: every additional dollar taken in taxes is one less dollar available to households and enterprises to spend, save or invest.

If every additional tax dollar was recycled into the economy with the same efficiency as private spending and investment, i.e. the new spending decreased household and enterprise costs proportionately, the effects might be roughly neutral or even beneficial, if the public spending leveraged some new efficiency that was available to everyone.

(If a new tax radically reduced the cost of college tuition for every college student, at least some households would be able to offset the higher taxes with significantly lower expenses. The problem with this swapping of public spending for private spending is politically powerful constituencies typically get the extra public spending, and so the citizenry end up subsidizing political favored groups rather than broadly beneficial programs that actually reduce household/ enterprise expenses.)

So how can politicos fulfill their ever-more costly promises without generating political or economic blow-back? Borrow and/or create the money needed to fund the promises. Actually, these are one mechanism, as Japan has shown: the government borrows a trillion, then the central bank creates a trillion out of thin air and buys the government bond with the new trillion.

If central banks can keep interest rates low, the cost of servicing the new debt is modest--or the interest can be paid with more borrowed money. If the central bank buys the new debt, it's like a perpetual-motion financial machine: the government can borrow unlimited currency, as every new Treasury bond is helpfully purchased by the central bank with new currency created out of thin air.

You see the self-reinforcing feedback loop this creates.The ease of borrowing and the initially modest costs of servicing this additional debt encourages more reliance on borrowing as the politically practical way to meet all the promises while placating powerful constituencies and winning re-election.

The consequences of runaway currency creation/government borrowing are not immediately visible, as the financial system's buffers compensate / subdue the adverse effects.

In other words, the unlimited money-creation/borrowing regime appears stable and sustainable as the risks and consequences are buried in the financial system as a whole.

But the apparent lack of consequences doesn't mean there are no consequences. It means the imbalances and extremes are piling up beneath the surface as the system's buffers thin. New extremes are required to keep the system afloat, but there doesn't seem to be any upper limit on money creation or new government debt.

Until the buffers give way, and all the accumulated consequences manifest in sudden fashion. Here is a chart of the black market ("free") Venezuelan Bolivar to the U.S.dollar (data courtesy of dolartoday.com). 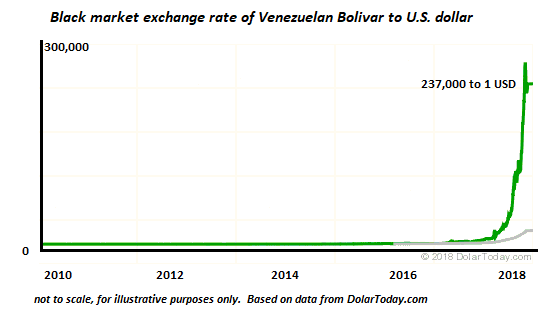 We're assured "that can't happen here," but history tells us that eventually it always "happens here." Ten years ago, few middle-class Venezuelans would have believed their national currency could sink to the point that a 100,000 bolivar bill was worth a mere 41 cents in US dollars.

The chart reveals the dynamic: the currency can be debauched for years with little apparent consequence, and then the buffers suddenly collapse and the currency is essentially worthless.

The collapse of the purchasing power of a currency can be slow or fast. Ten years of 10% annual inflation in an economy of near-zero wage inflation will do the trick, or a sudden crisis of faith creates a bidless market for the currency: nobody wants to part with anything of value for the currency.

Just as structures weaken imperceptibly before they collapse in a heap, the undermining of national currencies by excessive issuance of currency/credit and government debt is also imperceptible. The politicos and functionaries in charge of the debauching of the currency are at first nervous that the market might sniff out the debauchery; but the complacent acceptance of their fraud by the markets and the public gives them the green light to increase the issuance of currency and debt.

Their confidence that they can get away with paying yesterday's promises with money borrowed from the future essentially forever builds into an inevitably fatal hubris.

The tragedy is so few act when the collapse is predictably inevitable, but not yet manifesting in daily life. Screaming but we wuz promised won't nullify the hurricane.

Thank you, Mark B. ($50), for your marvelously generous contribution to this site -- I am greatly honored by your steadfast support and readership.