The Doomsday Scenario for the Stock and Housing Bubbles

It was always folly to believe that inflating asset bubbles could solve the structural problems of a post-industrial economy.

The Doomsday Scenario for the stock and housing bubbles is simple: the Fed's magic fails. When dropping interest rates to zero and flooding the financial sector with loose money fail to ignite the economy and reflate the deflating bubbles, punters will realize the Fed's magic only worked the first three times: three bubbles and the game is over.

So what happens when punters realize there won't be a fourth bubble? They sell. Bids disappear because who's dumb enough to bet (with Japan and Europe as lessons) that more liquidity and negative interest rates will magically work when zero interest rates didn't move the needle?

Who's foolish enough to catch the falling knife (i.e. buying plummeting assets on the way down) on the unsupported assumption that the next dose of Fed magic will reverse a bidless market?

And should the Fed start buying stocks, mortgages, housing and bonds to prop up those bidless markets, what's the message it will be sending? Desperation. If the only buyer is the money-printing central bank, that's pretty good evidence that your economy and markets are in free-fall.

The loss of faith in central bank magic will be gradual at first, as magical thinking dies hard. It's oh so comforting to believe the central bank will rescue every overleveraged mal-investment and bail out every high-risk speculation, but the funny thing about the Fed's magic is it only works in liquidity crises--in every other condition, it only makes matters worse.

Does making it cheap to borrow improve the productivity of capital investments? You must be joking. The poster child of Fed magic is corporate buybacks, which 1) create no goods 2) create no services 3) do nothing to improve real wealth creation, i.e. higher productivity and 4) burden the company with higher debt loads, inhibiting future capital investment in actual productive capacity.

The only thing stock buybacks accomplish is to enrich shareholders and top managers with stock options. Rather than fix what's broken in the economy, the Fed's plan of "make the already-wealthy even wealthier" has created a new and monstrous problem: soaring wealth inequality.

The structural problems of the U.S. economy cannot be solved by inflating asset bubbles, but that's all the Fed can do. Ironically, everyone cheering on Fed dovishness today is writing the obituary of Fed influence going forward because the masses have awakening to the Fed's role and the political blowback against enriching the already-rich is going to blow away the Fed's political leeway to further enrich the already-rich.

Those who are confident that there's nothing standing in the way of a fourth asset bubble need to back up their faith with some historical examples of bubble economies running past the third bubble.

This will lead to a sudden realization that the Fed has failed and can't possibly succeed in inflating a fourth asset bubble. This will unleash a phase shift in the market's belief system that will lead to a conclusion that the only rational strategy is to sell now before the bid disappears entirely.

But by then, of course, it's too late, because everyone else will be hitting the "sell" button at the same time.

It was always folly to believe that inflating asset bubbles could solve the structural problems of a post-industrial economy in the throes of profound demographic and technological change. The Fed has pursued the folly for 25 long years to the cheers of the class that has seen their wealth soar but reality is about to play Godzilla to the Fed's Bambi.

This is the Doomsday Scenario for those who believed $900,000 bungalows were going to $1.8 million and the S&P 500 was going from 2,800 to 5,600., but for those who understand the mortal danger of relying on asset bubbles to prop up a failing status quo, it will be a welcome reset that will enable desperately needed structural changes. 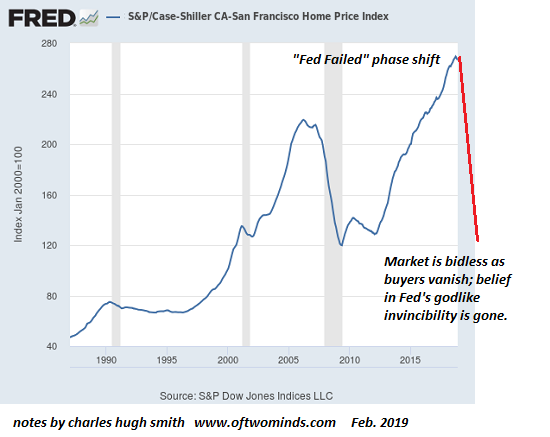