Can We Finally Have an Honest Discussion about the Opioid Crisis?

The economy no longer generates secure, purposeful jobs for the working class, and so millions of people live in a state of insecure despair.

The opioid epidemic is generating a lot of media coverage and hand-wringing, but few if any solutions, and this is predictable: if you don't face up to the causes, then you can't solve the problem. America is steadfastly avoiding looking at the causes of the opioid crisis, which is soberly reflected in these charts of soaring opioid-caused deaths: 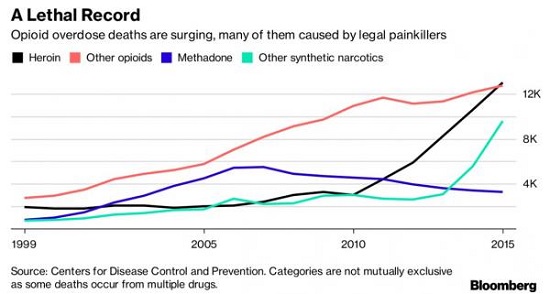 If we are going to have an honest conversation about the opioid epidemic, then we need to recognize the real causes of the epidemic:

1. The Pharmaceutical industry falsely claimed synthetic opioids were non-addictive, and a complicit, toothless regulatory system did nothing, egged on by politicians who were bought off by mega-bucks campaign contributions from Big Pharma.

2. Our sickcare system is very good at over-prescribing painkillers as a substitute for treating the source of the pain, which is often complex. Our "healthcare" system, much of which consists of endless TV adverts promoting one costly medication after another, is basically a conduit from Big Pharma to poorly informed "consumers" (quaintly referred to as "patients" to mask the actual dynamic).

This system has trained "consumers" to expect a magic pill for every ailment or pain, and any doctor who refuses to over-prescribe is risking blowback from the "patients" and the rest of the system. Americans have been trained to avoid treatments that require effort and changing their lifestyle; they demand a magic pill that works right away, with no effort required.

3. The economy no longer generates secure, purposeful jobs for the working class, and so millions of people live in a state of insecure despair, a state devoid of purpose, meaning, and ways to contribute to their families and communities. People stripped of meaningful livelihoods are prone to finding escape in destructive addictive drugs and habits.

4. The counterproductive War on Drugs has effectively outlawed cannabis for decades, depriving the public of a pain-reducing natural product. While the law-enforcement status quo, exemplified by Attorney General Jeff Sessions, still makes factually false claims about the dangers of cannabis, the truth is that if cannabis were legal, affordable and easily available, tens of thousands of Americans would still be alive, because cannabis doesn't kill people and you can't overdose on it.

It doesn't have to be this way. We have the means to generate meaningful work in our communities--I've laid out one system to accomplish this in my book A Radically Beneficial World.

We should legalize cannibis immediately at the federal level. While law-enforcement bureaucracies will mourn the slashing of their bloated War on Drugs budgets, the nation will finally put the destructive, failed, counter-productive War on Drugs in the ash heap of history.

You can't just give people and communities a subsistance entitlement like Universal Basic Income (UBI) and expect them to thrive. If we look deeply into the opioid epidemic, we find a crisis of purposelessness fueled by a lack of meaningful work and ways to contribute and earn financial security by serving others in the community.

If we don't face up to the essential role of meaningful work in human fulfillment and security, then we'll never solve our addicition epidemic and all the related social ills.

I explore these issues in my new book Money and Work Unchained.

Thank you, Albert S. ($5/month), for your wondrously generous pledge to this site -- I am greatly honored by your support and readership.