It's Not About Democracy: Control Fraud Is the Core of our Political System

The many are finally calling out the abusers of power because there's no longer any need to pay the corrupting costs of centralization.

If we strip away the pretense of democracy, what is the core of our political System? Answer: control fraud, which I define as those with control/ power in centralized institutions enriching themselves at the expense of the citizenry by selectively modifying what's permissible, and doing so in a fully legally compliant process, i.e. within the letter of the law if not the intent of the law.

I addressed control fraud a bit in The Hidden-in-Plain-Sight Mechanism of the Super-Wealthy: Money-Laundering 2.0 (December 29, 2017), in which I quoted Correspondent JD.

Money Laundering 1.0: You make a bunch of dirty money and you have to find a way to make it legit. How can you turn a bunch of drug money into proper investments? This was a problem for bootleggers and persists into current times. With control fraud, you co-opt the legal machinery and use it to steal. The system protects the deceit. In 2008 we bailed the jerks out. The two are often used together.

I think Money Laundering 2.0 is the second part of this equation and the big global trend. With 2.0, the holder of wealth uses the wheels of the world system to offshore gains (legit or not) to safe places where they cannot be taxed or clawed back. The concept is simple, but the mechanisms are by nature complex to conceal the deal. Think Cayman Islands, Paradise Papers, shell companies, etc, etc. etc. Dump money into crazy cars, homes, etc. If physical goods aren't easy, give to a key foundation or politician and you will be rewarded with complicity at a later date.

Suddenly, pieces fall together. The Russians were not colluding to throw an election; they were as surprised Nov. 2nd as everyone else. The collusion was not about politics, but about Money Laundering 2.0.

Money Laundering 2.0 uses the wheels of accounting and government to allow offshoring of wealth, often passing off losses to the taxpayers in the form of debt.

Thank you, JD. I would add that once oligarchs, kleptocrats, corrupt officials, corporations and politically powerful plutocrats (i.e. the elite few) park their wealth in overseas havens, protected from taxation, they force the many (i.e. those left behind whose income and wealth is exposed to taxation) to shoulder more of the burdens of taxation, that is, pay higher taxes.

The important point here isn't that control fraud is enabled by centralized institutions; it's that control fraud is the only possible output of centralization. I discussed this dynamic in my books Why Things Are Falling Apart and What We Can Do About It and Resistance, Revolution, Liberation: centralization concentrates the power needed for insiders to benefit themselves at the expense of everyone outside the ring of power. 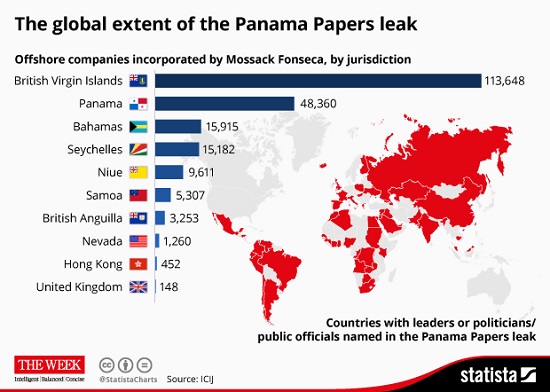 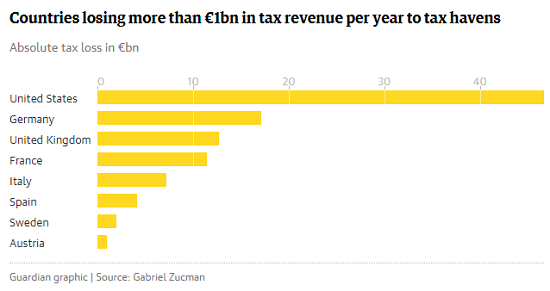 We're told that centralized power is the only possible way to organize human society, that it is as inevitable as the tides. But this is no longer true. This claim serves insiders well, as it makes their self-serving abuses of power seem if not legitimate then unavoidable.

But centralized organizations can now be replaced by decentralized networks. We no longer require moguls, empires or emperors, or their modern equivalent (Eurozone, Politburo and Federal enforcers, etc.) or even centrally controlled currencies, which are the ultimate form of control fraud.

The many are finally calling out the abusers of power because there's no longer any need to pay the corrupting costs of centralization. The benefits of centralization were exhausted in the 20th century, and now the negative consequences are piling up, suffocating the planet and its people. We are sliding down the S-curve of centralization, gathering momentum:

Centralized power is never about democracy or the consent of the governed; those are mere props to hide the core function of centralized power: control fraud that benefits the few at the expense of the many.

Thank you, John A. ($5/month), for your splendidly generous pledge to this site -- I am greatly honored by your steadfast support and readership.