France's Ghosts of '68: General Strike vs. Macron and the Technocrat Elites

The Paris elites and their enablers may find that the next general strike won't immobilize Paris, it will strangle Paris from the periphery.

Eleven months ago, I posited in The Ghosts of 1968 (2/14/18) that the idealistic hope that mass demonstrations could trigger real reform had expired. The mass demonstrations of the gilets jaunes (yellow vests) in 2018 dramatically reinvigorated the topic.

I don't see the yellow vest uprising as idealistically fueled; it's fueled by desperation and what Francis Fukuyama termed the working classes' "perception of invisibility" in a recent essay (Against Identity Politics (Foreign Affairs, Sept/Oct. 2018), a view echoed by French geographer / author Christophe Guilluy who said that "the French people are using the gilets jaunes to say we exist."

Unstoppable": Christophe Guilluy on the cultural divide driving the yellow vests (via Arshad A.)

Guilluy: "Not only does peripheral France fare badly in the modern economy, it is also culturally misunderstood by the elite. The yellow-vest movement is a truly 21st-century movement in that it is cultural as well as political. Cultural validation is extremely important in our era.

One illustration of this cultural divide is that most modern, progressive social movements and protests are quickly endorsed by celebrities, actors, the media and the intellectuals. But none of them approve of the gilets jaunes. Their emergence has caused a kind of psychological shock to the cultural establishment. It is exactly the same shock that the British elites experienced with the Brexit vote and that they are still experiencing now, three years later."

Interviewer: How have the working-classes come to be excluded?

Guilluy: "All the growth and dynamism is in the major cities, but people cannot just move there. The cities are inaccessible, particularly thanks to mounting housing costs. The big cities today are like medieval citadels. It is like we are going back to the city-states of the Middle Ages. Funnily enough, Paris is going to start charging people for entry, just like the excise duties you used to have to pay to enter a town in the Middle Ages.

The cities themselves have become very unequal, too. The Parisian economy needs executives and qualified professionals. It also needs workers, predominantly immigrants, for the construction industry and catering et cetera. Business relies on this very specific demographic mix. The problem is that the people outside of this still exist. In fact, Peripheral France actually encompasses the majority of French people."

Interviewer: What role has the liberal metropolitan elite played in this?

Guilluy: We have a new bourgeoisie, but because they are very cool and progressive, it creates the impression that there is no class conflict anymore. It is really difficult to oppose the hipsters when they say they care about the poor and about minorities.

But actually, they are very much complicit in relegating the working classes to the sidelines. Not only do they benefit enormously from the globalised economy, but they have also produced a dominant cultural discourse which ostracises working-class people.

The middle-class reaction to the yellow vests has been telling. Immediately, the protesters were denounced as xenophobes, anti-Semites and homophobes. The elites present themselves as anti-fascist and anti-racist but this is merely a way of defending their class interests. It is the only argument they can muster to defend their status, but it is not working anymore.

Now the elites are afraid. For the first time, there is a movement which cannot be controlled through the normal political mechanisms. The gilets jaunes didnt emerge from the trade unions or the political parties. It cannot be stopped. There is no off button. Either the intelligentsia will be forced to properly acknowledge the existence of these people, or they will have to opt for a kind of soft totalitarianism."

Mobilizing 80,000 heavily armed "security forces" is more like hard totalitarianism, justified, of course, by a fatuous claim of defending "the social order," i.e. the complete domination of elites.

But the French elites are discovering the disconcerting reality that it's impossible to defend every traffic-speed camera, every bank, etc. from sabotage.

Yellow vests knock out 60% of all speed cameras in France

The class analysis of the current crisis is now coming into focus: a reversal of polarity from the 1968 general strike of elite students and labor unions. Fifty years ago, the students of the elite Paris universities garnered the support of the labor unions and this combined force nearly toppled the government with a general strike.

The labor unions are also missing in action, as they are now adjuncts of the ruling elites, feeding at the same trough of tax revenues and corporate globalization-financialization profits.

The gilets jaunes / yellow vests are a working class revolt against the elites and those who identify with the elites: the fake-progressive hipsters, the aspiring technocrats and the comfortably secure state unions, all of whom are now on the elite side of the barricades.

The Paris elites and their enablers may find that the next general strike won't immobilize Paris, it will strangle Paris from the periphery. The unions which were on the democratic side of the barricades 50 years ago may find their identification with the ruling elite challenged, and they'll be forced to either side with the authentic working class (yellow vests) in a general strike or throw their support behind the undemocratic technocrat elites that run France for their own benefit.

The coming general strike may not echo 1968: rather than a grand confrontation that invites the elites' brutal paramilitary suppression, the working class dissenters may wage a guerrilla / asymmetric warfare campaign of sabotage and fleeting demonstrations that exhausts the paramilitary "security forces" and increases the political and financial costs of the elites' suppression.

The fake-progressive hipsters claiming to be anti-fascist are themselves the anti-working class fascists, and they're finally being called out on their self-serving hypocrisy.

That's the class division in a nutshell. The fake-progressive technocrats are skimming $200,000 a year to defend an indefensible undemocratic neofeudal system of exploitation that handsomely benefits the few at the expense of the many. 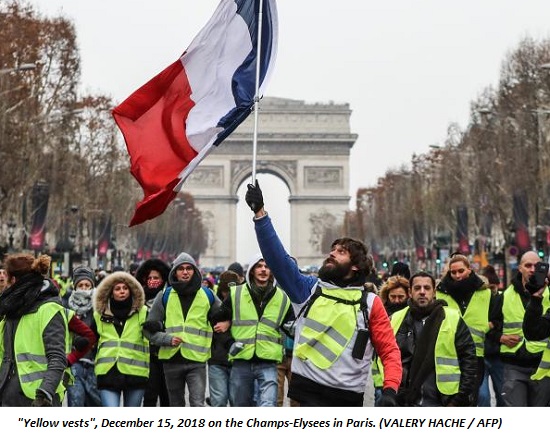