Was Marx Right about Capitalism Destroying Itself from Within?

What are the internal contradictions that could unravel capitalism from within?

One of the core tenets of Marx's work is that capitalism will be undone by internal contradictions that would manifest as ever-greater crises that would eventually destroy the system from within.

As the global economy continues to unravel beneath the surface, it's a good time to re-examine Marx's claim. If if turns out the current version of global capitalism is indeed unraveling due to its internal contradictions, it would be valuable to understand this now rather than later.

Sartre once observed that students are only taught enough about Marx's work to refute it. Despite the difficulty of Marx's writings (only German philosophers can be so convoluted), its elevation to scripture by various academic tribes, and his failure to describe his "scientific socialism" alternative to capitalism in the same detail he devoted to his critique of capitalism, Marx's work remains relevant and insightful.

Thus we continue to see articles such as Capitalism is unfolding exactly as Karl Marx predicted.

I'm not in either of the two camps, those trained to dismiss Marx's critiques or those who devote their careers to jousting over Marxist minutiae. It's been decades since I studied Marx in a college classroom, but I've continued to apply his core insights to our era.

To understand Marx's critique of capitalism, we have to understand that he came to economics via philosophy, specifically the writings of Hegel. In other words, Marx did not approach the study of capitalism from the abstractions of classical 19th century economics (Marx was born in 1818) but from a profound interest in history, social and spiritual development and human alienation. Marx ended up devoting his life to an understanding of capitalism because it is a world-system that drives history and society.

Hegel believed human history wasn't just "one damn thing after another;" he saw it as teleological, i.e. on a trajectory leading to higher social and spiritual development. Given this context, it's little wonder that Marx viewed capitalism as a necessary stage of history creating the conditions for the next advancement.

Prior to Marx, classical economic theories focused on the dynamics of supply and demand, trade, credit and money. Adam Smith was also a philosopher (and a close friend of David Hume), and he devoted an entire book to the moral foundations of capitalism, The Theory of Moral Sentiments, before he wrote The Wealth of Nations, which focused on what he termed "commercial society," what we now call political economy.

While Smith focused on the moral foundation of decentralized self-organizing markets that automatically benefit all participants (via "the invisible hand"), Marx focused on the conflicting interests of capital and labor, and on capitalism's unending disruption of the social and economic orders, a dynamic captured in Marx's famous observation that "everything melts into air."

What are the internal contradictions that could unravel capitalism from within? I don't claim this is an exhaustive list, or that it would gain the approval of academic overlords of Marxist scripture, but "in the spirit of Marxist thought," these are potentially fatal dynamics that are unfolding in real time in the current version of global/monopoly/finance capitalism.

Each of these deserves a serious essay but for now, let's just review the list in broad-brush.

1. Traditional social structures "melt into air" but have no replacement. The owners of Big tech would have us believe social media, search and endless entertainment are enough to to replace all that's being dismantled, but that claim is both self-serving and absurd. Society is unraveling before our eyes and an addiction to small screens is not a replacement for what's being lost.

2. Marx described the inevitability of overcapacity and overproduction as capital seeks to establish dominant market share (as one path to monopoly and pricing power), and we see this in industry after industry. As overcapacity expands, profits plummet, pushing capital into speculative gambles that inevitably blow up.

3. Capital gains, labor loses ground--to automation, over-supply of conventional labor and to consolidation as entire layers of management and distribution are wiped out. Thomas Piketty described how the rate of growth of capital far exceeds that of the real economy and labor's share of that economy. As a result, we are reaching extreme concentrations of wealth and political power that are unleashing destructive disorder as elites struggle to maintain their control of the downwardly mobile masses.

4. Monopolies and cartels push prices higher, but not wages. As many of us have noted, costs of big-ticket essentials have been soaring for two decades while wages have been stagnant (when measured by purchasing power) for the bottom 95%. The stop-gap "solution" is to borrow money from future earnings to pay for life today, but this is a self-liquidating dynamic: eventually incomes are too overcommitted to support more debt, and defaults take down the entire system of debt and consumption.

5. Finance capital, i.e. financialization, has reached diminishing returns: there's literally nothing left to monetize, leverage and securitize. Much of the "wealth" created in the 21st century is phantom wealth generated by financialization. There is no substitute sources for trillions of dollars in income and capital gains as the financialization sputters and then blows up as bets go bad, counterparties fail to pay and defaults overwhelm a system that must expand or die.

7. Energy and waste. Marx did not foresee the depletion of irreplaceable energy sources, but the stupendous waste of resources built into our consumption-based, credit-based industrial economy falls within his critique of commodity fetishism.

That there is no substitute for high-density hydrocarbon fuels is a reality that elicits the most passionate forms of denial and magical thinking, and as we consume the cheapest-to-access energy to squander in global traffic jams, military misadventures, planned obsolescence, etc., the energy growth demanded by the system will fail to appear at a cost affordable to the bottom 80%. At that point the entire system implodes.

The assumption that marketing will save the system by generating new trillions in income and wealth assumes consumers have abundant disposable income (or credit) to spend. If incomes decline, and/or rising costs strip disposable income to the bone, then how valuable is all the data that's being collected and sold as the key to profits and wealth? The unraveling of the credit-based consumer economy will also reveal the limits of marketing as the "industry" that will save capitalism from the decline of profits, capital and credit.

The power of this data-collection-as-unpaid-work is described in this article: You Are Literally Working for Silicon Valley and Don't Know It The digital economy has been called 'surveillance capitalism,' but that doesn't capture how insidious it really is.

A chart of the relentless concentration of wealth at the very apex of the wealth-power pyramid: 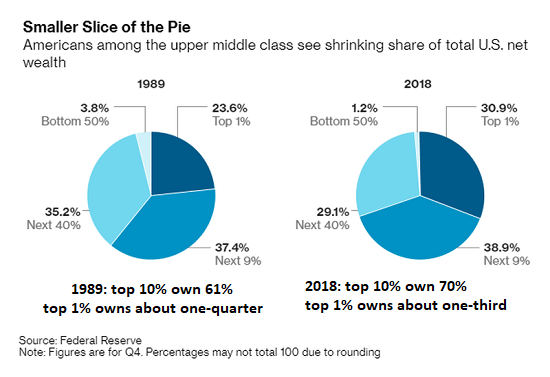 A chart of the relentless decline of wages' share of the economy's total income:

How many of these dynamics have to play out to collapse the current version of global/monopoly/finance capitalism? We have a ringside seat to the spectacle, and we'll likely know within the next decade.