The 1970s: From Rotting Carcasses Floating in the River to Kayak Races

If we don't bother measuring national well-being, the health of the nation's commons and resources and advances in the public's interests, then we foolishly call a decade of tremendous advancement "stagflation."

Correspondent J.D. read The Forgotten History of the 1970s and kindly added a graphic example of the remarkable transformation wrought by the federal Clean Water Act and other environmental regulations mandating the clean-up of the nation's air and other public "commons"--the nation's biosphere and resources that we all share as an essential part of the common good and the public trust.

That's the problem with proclaiming "markets solve all problems." They don't; in fact, left to their no-moral-compass ways, they create horrendous problems for the many subjected to the profiteering of the few, problems that destroy public "commons," the common good and the public trust.

What better way to foster "growth" and boost "profits" than dump offal and carcasses in the public's rivers, rather than bear the costs of proper disposal? This is one manifestation of The Tragedy of the Commons, a concept clarified by Garrett Hardin in his seminal 1968 essay of the same name: if a for-profit private enterprise can offload costs of its own production onto the public, that cost savings enables faster growth and higher profits.

But who benefits from this growth and higher profits? The few who own the private enterprise. Who bears the destruction and costs? The public. Laying waste to public resources is the "market solution," and any corporate manager who dared slash profits and growth to fund proper disposal of offal will be quickly fired and sent to Corporate Siberia, as the howls of outrage from "shareholders" (a.k.a. the top 0.1%) deafen the ears of the management.

This is why America's air and water became increasingly polluted, unhealthy and ugly: dumping private-sector waste into the nation's air and water boosted "growth" and "profits." I've put these words in quotes to denote that they aren't actually expansions of anything remotely beneficial to the national interest or the American public; they were only beneficial to the few who owned and managed the for-profit private enterprises.

There are many ways for-profit private enterprises dump costs onto the public: profits are private but costs are public. Corporations can pay such low wages that their employees need publicly funded food stamps to get by. Financial companies take extraordinary risks to reap immense profits, knowing they'll get to keep the profits and the Federal Reserve and Treasury will bail them out at the public's expense.

Stripped of ethics enforced to defend the public's interests, corporations routinely lie, cheat, defraud and embezzle to boost profits, knowing the fine will be modest: just the cost of boosting profits by any means available. Consider this data base of 6,300 major corporate fines and settlements from the early 1990s to 2015 compiled by Jon Morse. No CEO or other manager paid any personal fines or served any prison time for any of these thousands of violations.

If we don't bother measuring national well-being, the health of the nation's commons and resources and advances in the public's interests, then we foolishly call a decade of tremendous advancement "stagflation." This "stagflation" was the direct result of the diversion of hundreds of billions of dollars (in today's money) of private profits and government tax revenues to clean up the wanton destruction of the public commons.

As I pointed out in The Forgotten History of the 1970s, additional vast, sustained investments in re-engineering the nation's industrial base to become more efficient and globally competitive eventually boosted the economy and private-sector profits.

The point here is structural transformations take time and require immense investments, time and investments that demand sacrifices of everyone--including the top 0.1% and "shareholders." If we fail to undertake needed transformations, the result is stagnation and a death-spiral down the black hole of sclerosis, corruption, greed and exploitation.

Here are J.D.'s comments and the photos he submitted:

"Your article on the role of 70s rebuild in Stagflation really hit a note with me. I was born in '58 and watched, and participated in, the transformation. I am a biologist and an environmental engineer and have worked over 34 years for a federal agency in Water Pollution.

You're right, the unmeasured wealth of a cleaner environment is huge. Allow me a single example. Here in Kansas City, the Kansas River flows into the Missouri River draining a huge watershed. For nearly 100 years the slaughter houses of the "East Bottoms" in KSMO discharged with no treatment into the two rivers. KCMO and KCK had no treatment of municipal waste. The Missouri river was foul and had fish kills.

In the 70s and 80s treatment was brought online. I came on board in '88 and have contributed to the rest of the work. Last fall we celebrated the 50th anniversary of the Clean Water Act at Kaw Point, where the two rivers meet. Now a park. We showed a picture of the site from the Nov. 1971 issue of National Geographic. Yep, that is blood, floating fat, and a cow carcass.

For the past 15 years I have worked in a 340 mile kayak race (MR340) that starts at the point. We are up to 450 boats now and thousands participate. KCMO is now building apartments and a huge women's soccer stadium on the riverfront. None of that would have been considered before."

Thank you, J.D. for the striking example. Somehow I doubt there would hundreds of kayakers and spectators anxious to participate in the Dead Carcass and Putrid Offal Regatta, nor many buyers for the Stench of Offal Condominiums. 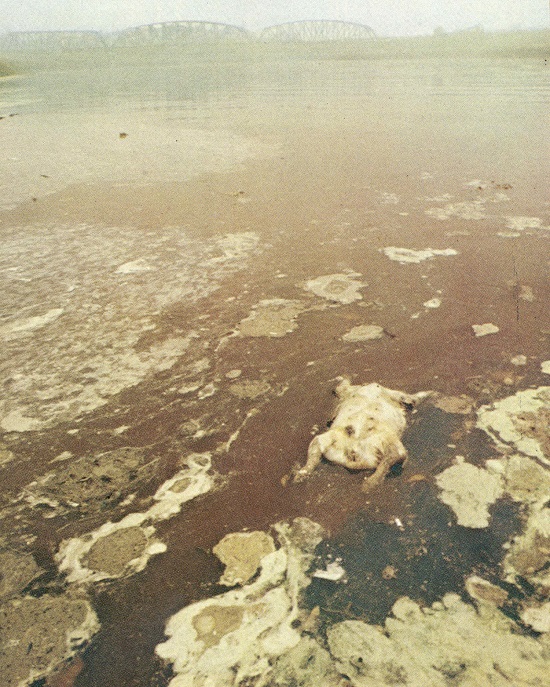 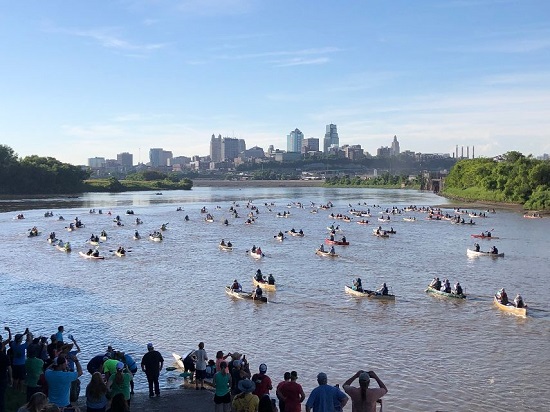