One of the great fictions about money is that it is neutral. It isn't. It's either designed for the elites or for the citizenry.

Many proclaim a desire for "sound money," but "backed by X" currencies are not "sound money" unless they can be converted directly into X. Those proposing gold-backed currencies are trying to secure the promise of "sound money" without actually doing the hard part, which is convertibility to the underlying asset.

The only way a currency can be "as good as gold" is if it can be converted to gold. Without a conversion mechanism, the currency isn't backed by anything but an illusory connection between reserves and the currency being issued.

The only way an oil-backed currency is actually backed by oil is if the currency can be converted into an oil futures contract, i.e. a claim on actual oil. This is what made America's "gold standard" an actual gold-backed currency: other nations could (and did) demand gold in exchange for their surplus dollars.

As I've discussed elsewhere, America's geopolitical goals required running sustained trade deficits to support our allies' economies, which left these exporting nations with surplus dollars they could trade for gold. America's gold reserves were being drained and if the convertibility had been left in place, the reserves would have fallen to zero: with the gold gone, that would have been the end of the gold standard.

Rather than waste our time with illusory "backed by X" schemes, why don't we cut out the intermediary paper-digital currency and just use gold and silver as money directly in coinage? In other words, if we want truly sound money, then use intrinsically valuable metals as money.

So let's run a thought experiment on this very ancient and common-sense sound money. Please withhold your screams that "this can't possibly work!" until the end. On second thought, let's just dispense with all the quibbles right now: gold and silver coinage was "sound money" for millennia, so we know it works. If we can't make it work now, that's our fault, not the fault of precious-metal coinage as money.

1. The gold reserves are not large enough at the current price.

The US currently holds 261,500,000 ounces of gold in reserve (8,133 tons). At the current price of gold around $1,900 per ounce, this stash is worth $500 billion--nowhere near enough to equal the current monetary base or money supply. Per the Federal Reserve:

Monetary base (currency in circulation plus reserves): $5.418 trillion.

2. The amount of "money" and "assets" that can be converted to cash floating around the world far exceed the reserves.

According to a report from the Boston Consulting Group, there was $27.5 trillion US dollars worth of electronic money in circulation around the world.

3. This generates the third problem: like every other asset, gold-silver coins will be bought up and hoarded by the wealthy few, leaving none for the the many to use as money.

There is no way to have a currency that circulates if every coin is immediately socked away, mostly by the wealthy both domestically and overseas.

The solution is three-fold:

The same mechanism could be used for silver coinage: the value of silver in the coins could be set at $250 per ounce.

This limits hoarding, at least until the global price of gold approaches $20,000 an ounce and the price of silver approaches $250/ounce.

This would set the total value of the dollar amount stamped on the coins of the US gold holdings of 261 million ounces at $10 trillion. This is roughly double the current monetary base.

This would reduce total household wealth in the US from $140 trillion to $14 trillion--more in line with the monetary base of $10 trillion.

3. Make holding coins abroad illegal and subject to immediate confiscation. Furthermore, make it a federal crime to hold more than $5,000 in coinage. This limit is necessary to keep the wealthy from buying up and hoarding the nation's coinage. To enforce this, each coin must have its own unique ID stamp so it can be tracked.

This changes the coin currency from an anonymous commodity that can be acquired without limit by criminals or the wealthy to money that is intended to circulate rather than become yet another asset hoarded by the wealthy.

There are other forms of precious metals the wealthy can accumulate in vast quantities, but money for the citizenry is intended for circulation, not hoarding by the wealthy.

One could argue that the difference between the arbitrary value of the coin--a $10 coin would only have 10% of that value in precious metals--is too high for these coins to be "sound money." But this misses the point: "sound money" doesn't require the value of the precious metal set by global markets to equal the dollar value stamped on the coin.

Any US resident could convert their electronic dollars into coinage with intrinsic value at any bank, with a maximum of $5,000 to disable hoarding by the wealthy. Note that once the dollar is reverse-split, then that $5,000 would be enough to buy a house currently valued at $500,000.

When the electricity goes out, coins are still money.

These coins would have value for 1) containing a defined quantity of precious metals and 2) being legal tender in the US.

As noted, the value stamped on the coins has to far exceed the price of the metal to discourage hoarding. Without this vast premium for being legal tender, precious metal coinage would immediately disappear into the vaults of the wealthy.

A monetary base of metal money would place strict limits on the central bank, Treasury and government spending. It would no longer be possible to conjure currency out of thin air to fill every interest group's trough or bail out the banks again. Free money for financiers would not longer be possible. Neither would giving every taxpayer "free money" to spend to support consumption. The Treasury could still sell interest-bearing bonds, but the monetary base could not be expanded by a few keystrokes.

In other words, a stable monetary base would be inconvenient for financial and political elites. There would be limits on their power and predation. But there would also be limits on the citizenry's demands. Promises made to win elections ("I'll give you more free money than my opponent") could no longer be honored with "free money" conjured out of thin air.

Living with constraints is the cost of having sound money.

This is a stone coin on the island of Yap. It's an extreme example of money. Metal coins are certainly more transportable and easier to use. 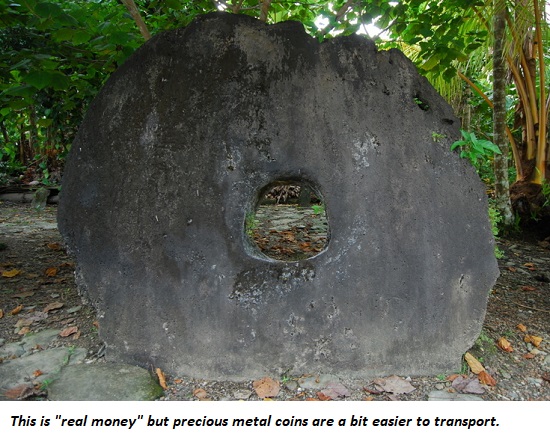