Can markets be saved an eighth time, a ninth time, a tenth time this year? How about next year?

What do we make of a stock market that's been "saved" seven times in a mere seven months? Saved from what, you ask? Saved from rolling over, of course; after six years of upside, the current uptrend is getting long in tooth, and evidence of global recession is mounting. 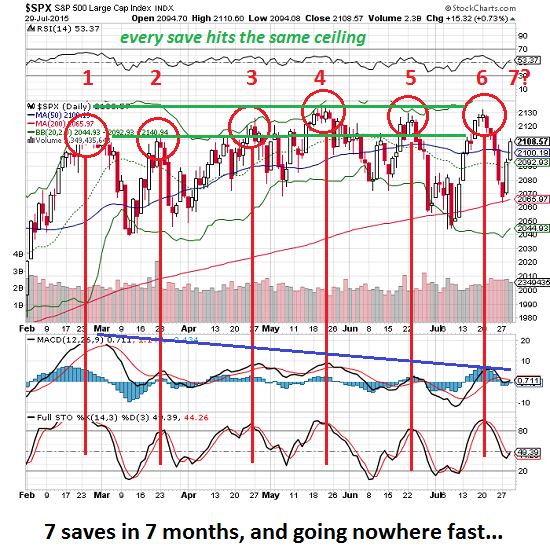 The problem for bulls is they keep hitting their head on the ceiling after every "save": instead of running to new highs in an extension of the six-year uptrend, the S&P 500 reverses once it reaches the narrow band of recent highs.

As soon as the SPX hits this range, somebody starts selling. It's called distribution: the smart money sells to whomever is buying--bot, trader, hedge fund, it doesn't matter, as long as someone takes the shares off their hands.

Are there an unlimited number of "saves" in the system? Will we wake up one morning in July of 2016 to find the market has been "saved" a 17th time, or a 20th time? can markets bounce once a month on some absurd "save" of a broken system essentially forever?

History isn't especially kind to the faith that the market can be "saved" every month for years on end. China's authorities and stock market punters are learning this the hard way: when the sentiment has turned, every "save" gets sold by the smart money, and then by the "dumb" (i.e. margined) money as their hopes of new highs are shredded once again.

Can markets be saved an eighth time, a ninth time, a tenth time this year? How about next year? Another 12 months, another 12 saves? If the "saves" are going to run out, why wait to be the last sucker holding the bag when the Fed's fetid hot air fails to work its magic?