Is the Echo Housing Bubble About to Burst?

Speculative bubbles that burst are often followed by an echo bubble, as many participants continue to believe that the crash was only a temporary setback.

The U.S. housing market is experiencing a classic echo bubble. Exhibit A is the Case-Shiller Housing Index for the San Francisco region, which has surged back to levels reached at the top of the first bubble: 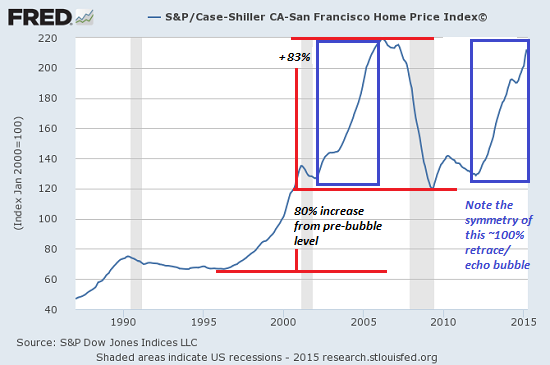 Exhibit B is the Case-Shiller 20 City Housing Index, which has notched a classic Fibonacci 62% retrace of the first bubble's decline. 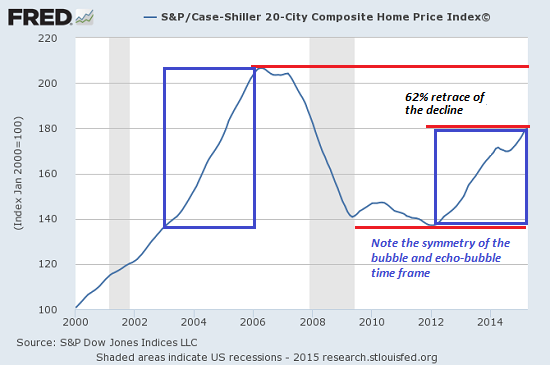 There is also a time symmetry, as each leg took about five years.

The echo bubble has now inflated for roughly the same time period, and has almost fully retraced the 45% decline from the 2007 peak. Though recent buyers may hope this bubble will be different from all previous bubbles (i.e. it will never pop), history suggests the echo bubble will be fully retraced in a sharp decline lasting about two to three years, in rough symmetry with the collapse of the first housing bubble 2008-2010.

The broader 20-city Case-Shiller Index reflects the same time symmetry: the echo bubble and the initial housing bubble both took about the same length of time to reach their zenith. Once again, we can anticipate a symmetrical decline that roughly parallels the 33% drop from 2007 to 2009.

There is one key difference between the first bubble and the echo bubble: echo bubbles aren't followed by a third bubble. Markets often give second-chances, but they rarely offer third-chances.