It boils down to two very simple principles: accredit the student, not the institution and teach every student how to rigorously learn on their own.

To accomplish this, vested interests must suppress, undermine or co-opt structural innovation, which threatens to obsolete the status quo. Innovation is bandied about rather freely now, generally as a marketing pitch, but real honest-to-goodness innovation is absolutely toxic to entrenched elites and vested interests, both of whom lose out when their gravy train is thrown off the tracks by innovation.

Cartels and monopolies are especially vulnerable to structural innovation, as the high costs they impose on customers and society eventually threaten to bankrupt households and even the state itself. To save itself from insolvency, the political-economic power structure must either accept innovation or it will be swept away by innovation.

Political power is nice but it's not enough. In the late 19th century, England's landed nobility and gentry had long held political power, and they attempted to use this power to bring the rising industrialists to heel.

Alas, the economic forces unleashed by industrialization could not be contained by mere political power, and the landed elites were superseded by the industrialist elites: It's a pity you had to sell your estate to the National Trust, but at least you have your memories of grandeur.

Which brings us to the equivalent vested interests of America's cartels: higher education, defense contractors and "healthcare" which profits not from health but from sickness.

Each cartel is ripe for disruption via technological innovation, and each is devoting enormous energy to protecting its fiefdom.

Case in point: I was recently asked to speak about the ideas for reducing the cost of college by 90% laid out in my 2013 book The Nearly Free University and the Emerging Economy. The webinar audience was polite but skeptical: wasn't I concerned that if campuses were obsoleted then students might not gain exposure to people different from themselves?

I think it's self-evident that America is so diverse that just about any job will bring young people in contact with people who are different from themselves. (There's even a large well-funded government institution that basically guarantees diversity: it's called the U.S. military.)

Nobody asked me about the crushing burden of student loan debt, though I mentioned the $1.6 trillion debt early in my talk. Vested interests are remarkably disinterested in costs borne by others, and remarkably interested in policy tweaks that give the PR appearance of addressing unaffordable costs of the cartel that pays their salary.

For example: free college for all, Medicare for All, etc.: how do you gain the political approval of vested interests? Guarantee the federal government (i.e. taxpayers) will pay all the bloated costs of a rapacious, ineffective system ruled by vested interests and predatory elites.

Consider this chart of student loans with fresh eyes. The tripling of student loan debt in a few short years is like clockwork: this is the price of suppressing innovation to protect vested interests.

What happened around 2009 that caused federally backed student loan debt to skyrocket? Entrenched insiders have various explanations, but they're really just excuses. The bottom line is that private-sector lenders started to get nervous about students replaying their gargantuan debts, so they lobbied the federal government to become the guarantor of their predatory lending. 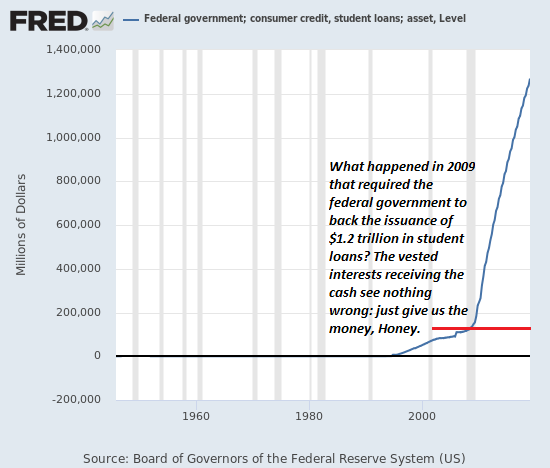 Everyone gorging at the trough of higher education could care less where the money comes from: just keep it flowing in all its hundreds of billions of dollars. After all, we have to offer "competitive salaries" to the assistant deans skimming $200,000 for monitoring virtue-signaling on campus.

What no vested interest will dare admit is higher education is failing entire generations of students while burdening them with debt. The technology exists to reduce the cost of higher education by 90% and improve the actual acquisition of knowledge, by changing the incentive structure and model of learning.

It boils down to two very simple principles: accredit the student, not the institution and teach every student how to rigorously learn on their own. These common-sense concepts would dismantle the artificial scarcity of credentials imposed by the higher education cartel, and prepare students for the real-world economy they will enter--an economy that places a premium on lifetime learning, flexibility, multiple skillsets and adaptability.

There's more about this is my book Get a Job, Build a Real Career and Defy a Bewildering Economy.

In summary: if vested interests are in charge, failure is guaranteed. Entrenched elites will cling to failing models and unaffordable cost structures to insure that the trough they feed from stays full to the brim, regardless of its failures and costs.

The only possible output of this arrangement is collapse.