Today's target: the notion that the collapse of the insolvent U.S. banking system would be so terrible. Really? Terrible for who? Certainly not the nation at large.

In fact the dissolution of the insolvent parts of the U.S. banking sector--yes, the investment banks, the money-center banks, the regional banks, and the savings and loans--would actually be an enormously positive development for the nation and indeed the world.

Let's start with the fact that a huge number of these lenders are insolvent. If all their bad loans, bad derivative bets and off-balance sheet losses were forced to be marked to market/liquidated to raise capital, then major bank after major bank would fold/enter bankruptcy.

And what exactly would be so bad about that? Businesses go under all the time. The truth is these banks will never ever recover the loans they wrote, so why try to prop them up with taxpayer funds? To bail out the ultra-wealthy owners of those banks, of course.

Recall that 1% of the citizenry own the bulk of all stocks and bonds: 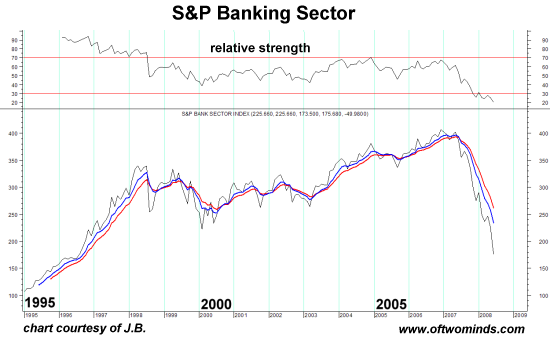 Even at its peak of bubble hubris, the entire sector was less than 20% of the S&P stock index's value. Now it's under 10%, like it used to be. The world didn't collapse when the banking sector declined, and it won't fall when insolvent banks are ushered through the bankruptcy process.

Look, WAMU has already fallen from $35/share to under $5/share. So what if it goes BK? Banks are businesses, and businesses go bankrupt all the time. United Airlines went BK and the next day employees showed up and the planes flew. When banks are liquidated/go BK, then the tellers will come to work and people will go in and do their normal banking. If a bunch of branches close, people will adapt. It will be tough on the employees let go, but how different is this than when millions of industrial and manufacturing jobs vanished over the past 20 years?

It's called creative destruction, and it's like the tide: you can't stop it, and all the government-funded sand castles in the world can't stop the tide.

That's what the Japanese government tried, and look what it got them: two decades of malaise and decline. Trying to cover up losses and keep bad debt off the books doesn't solve anything; the money's already lost.

All these absurd bailouts have one goal: enable insolvent homeowners to bail out insolvent lenders with new loans which will inevitably go bad, too. Only it will be the taxpayer who's stuck with the bill, not the banks who wrote the loan in the first place.

So let me repeat: not only should we as a nation let the banks go belly up, we should insist on it. Regulators should force every lender to declare all its assets and liabilities and mark them to market immediately. If the bank is insolvent, then let it enter bankruptcy. The money's already lost; let's just be honest about, repudiate the debt and move on.

Yes, some pension funds and 401K accounts have suffered losses due to banking sector ownership. But those losses have already be chalked; there's not much downside left, so the big losers will be the fat cats, not the pensioners whose retirement fund owns a shriveling piece of WAMU or Citicorp.

Now let's move to the other big topic: how housing costs have essentially impoverished average Americans. The number one cause of poverty in the U.S. is housing prices and rents which have risen three times faster than income since the 1960s.

As David Fischer noted in The Great Wave: Price Revolutions and the Rhythm of History

The cost of rent and real estate in the United States multipled sixfold from 1960 to 1992, while the consumer price index increased threefold. Prime real estate went up tenfold or more. 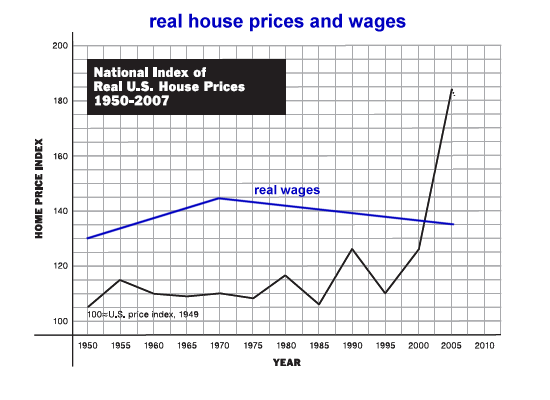 If you go the BLS CPI page and fire up the CPI inflation calculator, you'll find that $100 in 1965 works out to be $600 in 2005. Meanwhile, housing prices rose 20-fold or more in that timeframe even as real wages dropped:

Hmm--productivity (and profits) soar, but wages actually decline, even as house prices skyrocket.

Put this all together and there is only one conclusion: to restore housing and rents to their rightful, historic levels, all 10 million distressed/foreclosed houses should be auctioned off for a $1 each. Let's give the current tenant or former homeowner first dibs, with the caveats (written into the deed) that they must maintain the property and that they have no other real estate property or assets.

(In tony neighborhoods, auction the houses for cash. The main point: get rid of them all at once, on the cheap, done in a day nationwide, and give priority to homeowners with no other real estate assets. Investors get to pick over what's left.)

Editor's note: After receiving a number of well-stated emails from readers, I now think the best approach is to auction the properties off at whatever the market will bear and give the proceeds to the bondholders. My main point remains: don't enable banks to hide bad debt if they are insolvent; it's better to face the music and get the houses into the hands of whomever will fix them/live in them/rent them, etc. Some resident is better than no resident or a criminal resident. (see reader comments at the end of the entry.)

You can massage the data however you want, but big-picture, here are the facts: there are about 50 million mortgages in the U.S., and about 10 million are either behind in payments, foreclosed, bank-owned (REO) or on the slippery slope down to one of these three endpoints. And there are some 22 million vacant/unused dwellings in the U.S.

I've published these numbers ad nauseum; please scan the archives below for the many entries which detail the statistics.

1. banks/lenders are already insolvent; the money's already been lost. Trying to hide the fact or paper it over with taxpayer bailouts changes nothing.

2. the only people who will be hurt by the recognition of bank insolvency is fat cats/ the top 1-5% of citizenry.

3, housing and rents have risen three or even four times faster than wages; to reverse poverty, the historical ratio should be re-established.

4. the best way to do this is repudiate all the bad mortgage debt and sell all the distressed homes for $1 to low and moderate-income people who will maintain them.

Now let's count the ways this will help the nation.

1. Instead of struggling to pay a bloated mortgage or skyhigh rent, millions of people will be paying nothing but property taxes. They have a stake in their house and neighborhood and every incentive to improve it. If they won't maintain the property, they lose the house and it is given to someone who will keep it up.

2. banks don't need to write mortgages for 10 million homes. No fees will be generated, and there is no investment banker needed to package the mortgages into deceptive securities. Good riddance. Loans are essentially commodities and should be as cheap as any other financial commodity.

3. Property values take a huge one-time hit. OK, so we are collectively not going to retire as millionaires based on a real estate bubble. If we are collectively paying much less for rent and mortgages, then we can start saving actual money rather than feeding off a frenzy which was doomed to collapse anyway.

4. the best way to do this is repudiate all the bad mortgage debt and sell all the distressed homes for $1 and up to whomever will restore them to liveability and live in them/rent them--no government funds required.

Now who would be hurt?

1. owners of lenders' stocks--mostly insiders, hedge funds, financial elites. Pension fudns who didn't exit yet will take a hit but 75% of the losses have already occured.

2. investors who bought the mortgage-backed securities and derivatives. Again: the money has already been lost, and trying to obscure this doesn't help anyone.

3. Wall Street and the thousands of jobs created spinning bad debt into bad securities. Many industries have been forced to shed hundreds of thousands of jobs; now it's the banking industry's turn.

The benefits and costs will be equitably divided according to housing demand and supply. Since there will be relatively few distressed homes in desirable areas like Manhattan, San Francisco, west Los Angeles, neighborhoods in Seattle, Portland, Des Moines, Austin, Boston, you name it, then these scattered homes sold at auctionwon't have much effect on real estate values.

In areas already devastated by 40% declines and massive numbers of vacant homes, once again: the money's already been lost, and no slight-of-hand or government handout can change that. So having 200 vacant houses sold for $1+ each would be a tremendous boon in the sense that the neighborhood's slide into criminal anarchy will be halted.

Yes, current homeowners with high mortgages will be stuck with homes which are worth less than their mortgages; but that's already the case. What's changed, except the reality that the money has already been lost has finally been accepted?

The received wisdom is that allowing banks and lenders to go bankrupt would be a national tragedy. Quite the opposite: trying to prop them and the overpriced, poverty-creating housing market up is the national tragedy. The money's been lost already, so let's just admit the reality and move on. That's what bankrupcty is all about--a healthy recognition of reality.

Social Contracts and the Art of Survival.

Thank you, Colin L. ($50), for your extremely generous contribution to this site. I am greatly honored by your support and readership.