The Global Template for Collapse: The Enchanting Charms of Cheap, Easy Credit

According to polls, the majority of Greek citizens want the benefits of membership in the euro/EU and the end of EU-imposed austerity. The idea that these are mutually exclusive doesn't seem to register.

This is the discreet charm of magical thinking: it promises an escape from the difficulties of hard choices, tough trade-offs, the disruption of vested interests and most painfully, the breakdown of the debt machine that has enabled the distribution of swag to virtually everyone in the system (a torrent to those at the top, a trickle to the majority at the bottom, but swag nonetheless).

If we had to summarize the insidious charm of magical thinking, we might start with the overpowering appeal of using credit to ease all difficulties.

When credit is cheap and easy to get, every scheme and racket gets funding because hey, why not? The cost is low (at the moment) and the gain might be fantastic. But even if the gain is unknown, the kickback/campaign contributions make it worthwhile even if the scheme fails.

Professional economists are duty-bound to claim national economies are not merely extensions of households. But this is just another falsity passed off as sophisticated truth by a profession that is being discredited by the reality of its failed policies, failed theories and failed predictions.

Since human psychology remains the dominant force in all economics, the household and national economies can only differ in scale.

In the 1970s, credit was scarce and hard to get. Young workers qualified for a $300 limit credit card, and it took careful management of that responsibility (always paying on time, etc.) to get a meager increase to $500. Mortgage rates were high (10%+) and your income and household balance sheet were scrutinized before any lender took a chance on lending you tens of thousands of dollars to buy a house. After all, the bank would be stuck with the losses if you defaulted.

Then came financialization. Banks could skim the profits from originating loans and offload the risk of default onto towns in Norway, credulous pension funds and other greater fools.

And if a default threatened the bank--for example, Greece in 2011--the bank simply bought political power and shifted the debt onto taxpayers. "The ATMs will stop working," the bankers threatened their political flunkies in Congress in 2008, and the bought-and-paid-for toadies in Congress and the Federal Reserve obediently shifted trillions of dollars in private liabilities and sketchy debt-based "assets" such as mortgages onto the taxpayers and the Fed balance sheet.

The same transfer of risk and losses occurred in Europe, as these charts demonstrate: (Source: If Greece Defaults, Europe's Taxpayers Lose)

Here is the debt in 2009--mostly owed to private banks and bondholders: 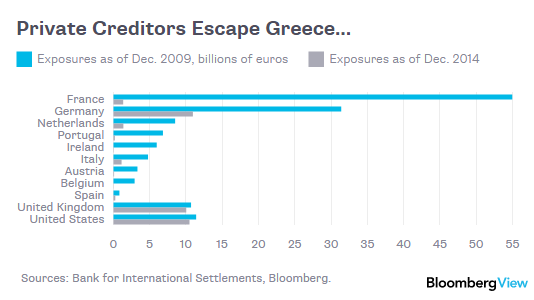 Here is the debt in 2015--almost all was shifted onto the backs of taxpayers: 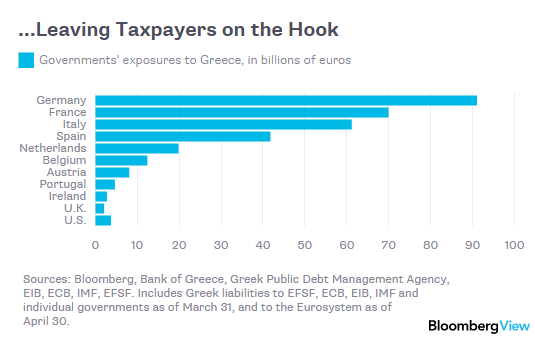 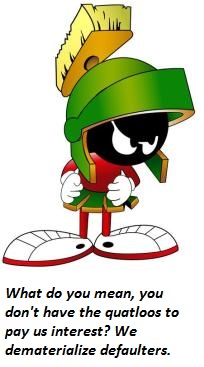 Ask yourself this: if you could shift risk and losses to the taxpayers, how would that affect your investing/gambling? Wouldn't you take much higher risks, knowing that losses would not fall to you but to abstract taxpayers? Of course you would, and this is the essence of moral hazard--the disconnect of risk and consequence.

Cheap, easy credit has created moral hazard and nurtured magical thinking throughout the global economy. The heart of magical thinking is that consequences have been disappeared or shifted onto others by financial enchantment.

The interest on the debt will be paid by growth.

We will make so much money on this investment/gamble, paying off the debt will be easy.

This bet can't lose because the Fed/People's Bank of China/ECB/Bank of Japan etc. will never let the market decline.