No, Autos Are Not "Cheaper Now"

According to the BLS, inflation in the category of "New Vehicles" has been practically non-existent the past 21 years.

Longtime readers know I've long turned a skeptical gaze at official calculations of inflation, offering real-world analyses such as The Burrito Index: Consumer Prices Have Soared 160% Since 2001 (August 1, 2016) and Burrito Index Update: Burrito Cost Triples, Official Inflation Up 43% from 2001 (May 31, 2018).

Official claims that grossly understate real-world inflation is a core feature of debt-serfdom and neofeudalism: we're working harder and longer and getting less for our earnings every year, but this reality is obfuscated by official pronouncements that inflation is 2%--barely above zero.

Meanwhile, quality and quantity are in permanent decline. New BBQ grills rust out in a few years, if not months, appliance paint is so thin a sponge and a bit of cleanser removes the micron-thick coating, and on and on in endless examples of the landfill economy, as new products are soon dumped in the landfill due to near-zero quality control and/or planned obsolescence.

Free-lance writer Bill Rice, Jr. recently analyzed shrinkflation, the inexorable reduction in quantity: What Does Your Toilet Paper Have to Do With Inflation? Manufacturers have been engaging in "shrinkflation," leaving consumers paying more for less, but stealthily.

In the guest post below, Bill looks at new car prices, and finds that official inflation for "new vehicles" from November 1983 to November 2013 measured only 43.8 percent... while actual car inflation (based on archived price records in Morris County, NJ) is 4.85 times higher than official CPI "new vehicle" inflation.

Prices for new cars sky-rocketed over 30 years (or did they?)
A lesson in hedonic adjustments
By Bill Rice, Jr.

Now heres the head-scratcher. According to the BLS, inflation for all goods (CPI-U) from August 1983 to August 2013 increased by 133.4 percent -- that is, far less than the sample of inexpensive cars from Morris County, NJ.

But thats just part of the inflation story. The BLS also publishes indexes in the category of "new vehicles." According to these indexes, inflation for "new vehicles" from November 1983 to November 2013 measured only 43.8 percent. That is, actual car inflation (based on archived price records in Morris County, NJ) is 4.85 times higher than official CPI "new vehicle" inflation.

How is such a huge discrepancy explained? Here, we detour into a discussion of hedonic adjustments, an eye-glazing topic for some, but where the rubber meets the road in any contemporary analysis of inflation.

In the latter part of the 1990s, the Bureau of Labor Statistics (BLS) decided to adjust new vehicle prices (and the prices of many other products such as computers) for "quality." The rationale for this improved methodology is that new cars are clearly superior to older cars.

For example, newer models often include features that werent standard in earlier times/car models. Presumably todays cars last longer than yesterdays cars, require fewer repairs and even include life-saving features like air bags. In short, we get a lot more car for the buck than we did in 1983.

While the 2010 Buick Regal is certainly a better car than the 1980 Regal, is it really $17,160 better? Or: could I ask for a Regal with "just the basic stuff" that was standard in the 1980 version and then ask my sales person, "Can you knock $17,000 off the sticker price?" I could ask, I guess, but the answer would be no. (Another person, I discovered, asked the same-type questions).

While the merits of hedonic adjustments can be debated, what cant be debated is the hard data produced by the BLS. Back in the day - before hedonic adjustments - new vehicles did experience price inflation, documented in the steep incline of CPI price indices for new vehicles from 1974 into 1997. However, beginning in March 1997, this graph suddenly pivots south. In recent decades, new vehicle prices have essentially been flat. 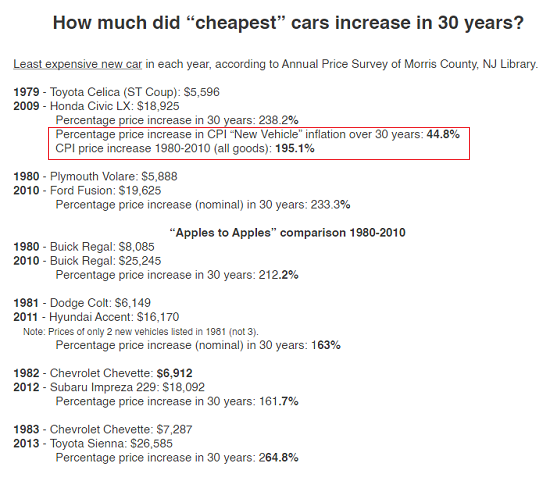 Bill Rice, Jr. is a freelance writer in Troy, Alabama. He can be reached at wjricejunior@gmail.com.