Local Government Is an Engine of Inflation

One reason the economy is so much more precarious than advertised is inflation has pushed households and small businesses to the edge--and one engine of that inflation is local government. This is not to dump on local government, which is facing essentially unlimited demands from the public for more services while mandated cost increases in government union employee wages and benefits ratchet higher.

Since personnel costs are 70+% of city and county budgets, those ever-increasing payroll, pension and benefits costs are the key driver of budgets expanding.

But local governments' ability to increase revenues are also essentially unlimited. There are all sorts of fees that can be created or increased if outright tax increases have been voted down by the public.

What amounts to blackmail is generally effective, however: if you want the giant potholes filled in your streets, you have to pass this municipal bond--or else.

Official inflation, growth in the economy (GDP) and increases in wages are typically pegged at around 2% to 3% annually. But cost increases in local government and agency services are soaring at rates far above the modest rates of economic expansion.

Here's a list of tax and fee increases hitting residents of one of the counties I call home; the list includes taxes/fees raised in 2017 and 2018:

I may have missed a few, but you get the idea: while wages have supposedly gone up 3% in 2018, taxes and fees are rising at much higher rates.

Small businesses are exposed to higher business license and other fees. Some cities have tripled certain classes of business license fees, charging a percentage of gross income, not net income, meaning a business that's losing money still has to pay the full annual licensing fee if they're struggling to keep afloat.

All these increases are manifestations of the Ratchet Effect: organizations and institutions only know how to expand, so budgets, head counts, administration, etc. are always ratcheting higher.

There are no institutional memories or mechanisms for contraction, i.e. reduced revenues, so when revenues decline sharply, the institution breaks down.

The Ratchet Effect sets up The Rising Wedge Model of Breakdown: as complexity, costs and layers of management all ratchet higher, the organization loses the flexibility required to deal with outright declines in revenues. As a result, any sustained drop in revenues causes the institution to break down, i.e. fail systemically.

Then there are transfer fees for every sale of real estate, and mandated subsidized housing requirements for new apartment buildings: a percentage of the new apartments must be made available at below-market rents for qualified tenants. The cost of the subsidized units are borne by the owner/developer, not the taxpayer, so the subsidy in effect raises the market rents.

Partly as a result of these local government fees, the cost of building new apartments is very high. As a result, rents are also higher. If demand is strong, some desperate (or rich) tenants will pay the much higher rent.

The owners of existing buildings look at the high rents and their natural response is to raise their rents accordingly: the new market price for a one-bedroom apartment has been set by the high-cost new building, and rents throughout the city ratchet higher.

The same dynamic pushes commercial rents higher, too. The ground-floor commercial space in the new complex is rented out at sky-high rates to a corporate chain, and suddenly that insanely high rent is the new baseline for every equivalent space in the city.

When an old building is demolished to make way for a new apartment complex with ground-floor commercial spaces, the old tenants never return: they can no longer afford the rent. As I've discussed here before, this gentrification drives out diversity, leaving the city's commercial districts a homogenized, lifeless cluster of Corporate America outlets.

Corporate America has zero loyalty or interest in local economies: the moment an outlet doesn't make its numbers, HQ shutters it.

Since rents have risen beyond what local small businesses can afford, there are no new tenants for the empty space when the chain outlet closes.

This sets up the rising tax/fee spiral of death, as local government seeks to replace the lost revenues by jacking up taxes and fees on the remaining small businesses. The higher costs appear "affordable" to a public and city staff who don't have to pay the soaring costs of keeping the doors open, so they're mystified when one small business after another closes their doors forever.

The Ratchet Effect has pushed costs above the point the businesses can survive, so they close.

Local government then increases tax and fee burdens on the remaining businesses, pushing more of them over the edge.

At some point, the trickle of businesses closing becomes a self-reinforcing flood. As vacant storefronts become the norm, cities respond to the loss of tax donkeys by launching desperate marketing campaigns which do nothing to address the real problem, high costs: come spend money in our commercial districts! These campaigns fail to move the needle, and as the economy slips into a long-delayed recession, city revenues plummet, triggering even more onerous fees and taxes. 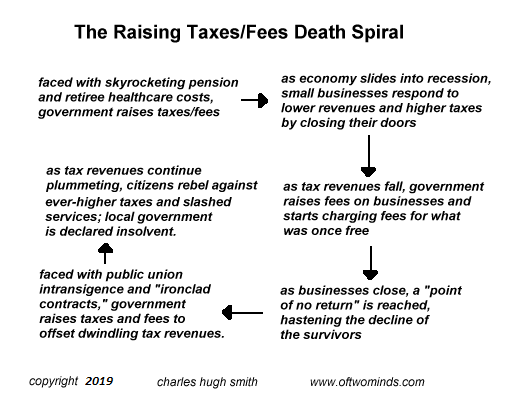