Is the Tech Bubble Bursting?

There are two other trends that don't attract quite the media attention that soaring profits do.

Is the decade-long tech bubble finally popping? Tech bulls are overlooking the fundamental reality that the drivers of Big tech's phenomenal growth--financialization and expansion into mobile telephony-- are both losing momentum.

A third dynamic--Big Tech monetizing privately owned assets such as vehicles and homes-- has also reached saturation and is now facing regulatory barriers.

Let's start with market saturation: of the 5.3 billion adults on earth over 15 years of age, 5 billion now have a mobile phone and 4 billion have a smartphone: The end of mobile (Benedict Evans). As for teens between 10 and 15, only the truly impoverished don't have a mobile phone of some kind.

As I discuss below, the primary dynamic of the past decade has been the integration of web-based services into mobile telephony. By any measure, that cycle is now complete.

I recently explored technology's ties to financialization and deflationary trends in prices and profits: Two Intertwined Dynamics Are Transforming the Economy: Technology and Financialization

Technology Is Not Just Disruptive, It's Disastrously Deflationary

The basic idea here is that the tech bubble has been inflated by a unique set of circumstances:

-- financialization, one manifestation of which is unprofitable Unicorn companies going public at lofty valuations (see chart)

-- the establishment of quasi-monopolies that have become immensely profitable.

These conditions are changing.

1. Many tech giants (Microsoft and Apple) are moving to monthly services, in effect becoming profitable utilities. These may be profitable but they are no longer fast-growing in terms of revenues or profit margins.

2. Calls for regulation of lightly regulated data-based corporations (Facebook and Google) are rising.

3. The weakness of Lyft and Uber stocks after their IPOs suggest a weakening appetite for betting on growth at any cost as a business model.

4. The profitable build-out of the past decade has been integrating web services with mobile telephony and data-mining social media and search. These have now been built out, so the tech cycle has reached stagnation in the S-Curve--a reality visible in Google's recent earnings disappointment.

There are two other trends that don't attract quite the media attention that soaring profits do:

1. Previous tech cycles / bubbles were founded on technologies that had the potential to greatly boost productivity. This cycle ( integrating web services with mobile telephony) is more about consumer convenience and distribution of services such as AirBNB and Uber than productivity.

To the degree that entertainment and the addictive distractions of social media are now at everyone's fingertips, and people are checking their phones hundreds of times a day, productivity has suffered rather than increased.

2. The services that are now distributed to mobile telephony are tremendously deflationary to revenues and profits. To note just one example of many, with a smart phone in hand, there's no longer any need to buy a camera or portable music player.

More pernicious is the deflationary impact on revenues and wages. The number of Uber drivers who earn the equivalent of what taxi drivers once earned (no great sum in most cases) is small.

In effect, Uber monetized an under-utilized asset--individuals' privately owned autos-- and stripped out the labor overhead that accompanies employment (and makes it expensive to employers).

The labor component of the service is poorly paid and stripped of income security and other standard benefits: Uber drivers don't qualify for unemployment, disability, healthcare etc. unless they pay those very costly labor overhead expenses out of their own pocket.

This model is under pressure on multiple fronts. Municipalities are starting to push back against the monetization of housing that's zoned for residential use only, and against the low wages and zero benefits paid to "gig economy" workers.

In other words, it isn't just absurd IPO valuations that are suggesting this tech bubble is about to burst--the fundamentals of the business models and the deflationary impact of technology are about to reduce the cash flows and profits of tech companies.

As for the fantasy that AI and machine learning will generate trillions in profits: as I explained in Is the World Becoming Wealthier or Poorer? (March 27, 2019) there is nothing intrinsically profitable about machine learning, robotics or AI. Rather, each is extraordinarily deflationary to profits as each is readily commoditized. 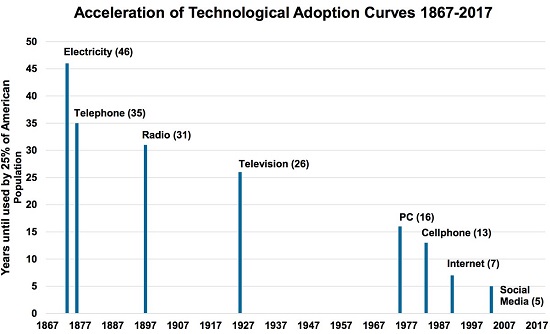