Will Cash Always Be Trash, Or Will It One Day Be King?


When the phantom wealth evaporates and risk assets go bidless, cash will once again be king, for the simple reason there will be so little of it.

Occasionally it's a good idea to step away from the daily grind to consider the larger issues we all face--for example, the future of the money we earn and the bits we invest in something we hope holds or increases its value.

At present, cash is trash: cash earns almost no yield, and in some countries it now earns a negative interest rate, meaning it costs you to park your cash in a bank.

Even cash equivalents such as one-year Treasury bonds pay almost nothing.

Those who avoided debt and risky assets since 2009 have seen their cash lose value when adjusted for inflation, while those who borrowed to the hilt and bought risk-on assets such as stocks, junk bonds and high-end housing have skimmed monumental gains for doing what the central banks incentivized: borrowing money and buying speculative risk-on assets.

Correspondent Kevin K. recently sent me a link to a home in the San Francisco Bay Area that was purchased around the crash era (2008-09) for $1.4 million, and sold last year for $2.1 million.

Assuming a conventional 20% down payment of $280,000, the savvy buyer borrowed $1.12 million at historically low rates and offloaded the house 6 years later for a cool $560,000 profit (assuming a 6% sales commission and closing costs).

Anyone who margined to the hilt in 2009 and rode the stock market higher with borrowed money easily earned returns in excess of 200%.

Yet how many people did so? Consider this chart of the wealth of U.S. households before and after the Global Financial Meltdown and Great Recession.

By the look of it, even the top 5%--individuals earning taxable incomes of $120,000 or more, according to the Social Security Administration, or households with total incomes around $350,000, according to the U.S. Census Bureau (Table F-3. Mean Income Received by Each Fifth and Top 5 Percent of Families, XLS file)--have yet to regain the value of assets owned in 2007, before the Global Financial Meltdown/Great Recession. 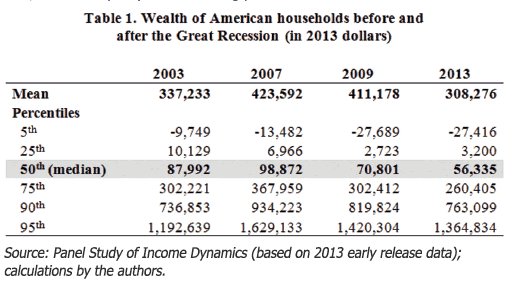 If the top 5% had borrowed/margined to the hilt and dumped all that dough into risk assets, their net wealth would have skyrocketed. Clearly, few did so.

What would have to happen for cash to be transformed from trash to "cash is king"? The basic answer is: all the risk-on credit/asset bubbles that have richly rewarded those who have speculated with borrowed money will have to implode and be impervious to central bank attempts to re-inflate the bubbles.

What conditions would have to be present for credit/assets to implode and not recover?

We are in uncharted territory in terms of the global bubble in credit and risk-on assets, so the answer isn't immediately clear. Here are some possibilities:

2. Borrowing dries up (despite abundant credit).

3. A global scramble for cash to pay debt and the costs of lavish lifestyles triggers the liquidation of risk-on assets.

4. The risk-on assets go bidless, i.e. nobody wants luxury yachts, super-cars, estates, etc. at any price because the value is plummeting.

5. As phantom wealth evaporates, everyone realizes the collateral propping up the mountains of debt is either impaired or non-existent.

When the phantom wealth evaporates and risk assets go bidless, cash will once again be king, for the simple reason there will be so little of it. When the opposite of the present dynamic is "impossible," then the "impossible" becomes not just likely but inevitable.