By this measure, the U.S. scores very poorly: 4 out of a possible 5 on the Fragility Index.

There is a certain logic to the idea that stability is a good predictor for future stability: if a nation's economy and governance are stable and devoid of disorder, this trajectory of stability will be durable, right?

Well, actually, no. Nassim Nicholas Taleb and co-author Gregory F. Treverton argue in their essay The Calm Before the Storm: Why Volatility Signals Stability and Vice Versa that "the best indicator of a countrys future stability is not past stability but moderate volatility in the relatively recent past."

"For countries, fragility has five principal sources: a centralized governing system, an undiversified economy, excessive debt and leverage, a lack of political variability, and no history of surviving past shocks. Applying these criteria, the world map looks a lot different. Disorderly regimes come out as safer bets than commonly thought, and seemingly placid states turn out to be ticking time bombs."

These principles are drawn from Taleb's work on fragility and anti-fragility as described in his book Antifragile: Things That Gain from Disorder.

How does the U.S. stack up? Let's go through the list.

1.Highly centralized power structure/governance: yes. Apologists can claim that government is decentralized via state and local governments, but this ignores the reality that virtually every policy of any importance is set in Washington by a relative handful of politicos, lobbyists and technocrats of the Deep State.

2. Undiversified economy: no. Despite the corrosive and venal dominance of the state, Wall Street/bank finance and the unproductive bubble-blowing FIRE economy (finance, insurance, real estate), the U.S. economy remains diverse.

3. Excessive debt and leverage: yes. One glance at this chart says it all: 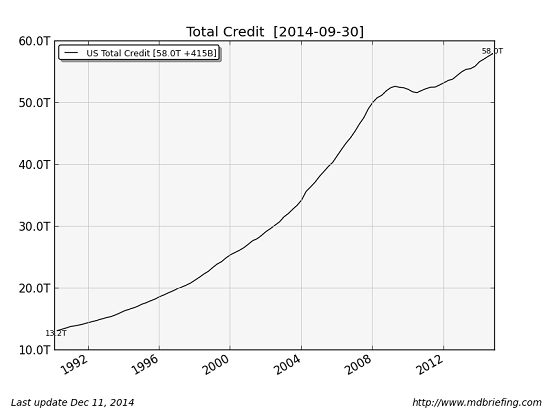 4. Lack of political variability: yes. Despite the frantic claims of partisans, the Demopublicans/Republicrats are in essence one ruling party with a few cosmetic differences to fire up their proles and partisans: If You Really Think It Matters Which Party Controls the Senate, Answer These Questions (November 6, 2014)

5. No history of surviving recent systemic shocks: yes. Some will argue that the U.S. weathered the global financial meltdown of 2008-09 and so that counts as a recent shock, but I would counter that the Status Quo's "fixes" were either half-measures that rewarded the banks for their perfidy or fake reforms that added costs and rewarded vested interests, i.e. were actually counter-productive: financial "reform," ObamaCare, etc.

All the Status Quo did to resolve the crisis was print $4 trillion in new Federal Reserve money, borrow $8 trillion in U.S. Treasury bonds and offer guarantees of $23 trillion to banks that should have been liquidated. Absolutely no real structural changes were made to the Status Quo power structure of the nation.

While 9/11 was a shock, was it equivalent to Watergate or the Vietnam War or the civil rights movement? I would argue that 9/11 was not equivalent because it did not divide the nation politically or challenge it economically.

From this perspective, it could be argued that the U.S. has not had a systemic political or economic crisis for 40 years. That is not recent; it's two generations ago.

Printing and borrowing trillions of dollars does not qualify as weathering a crisis. Clicking a few keys to create or borrow trillions only papers over the systemic issues that were the sources of the instability.

By this measure, the U.S. scores very poorly: 4 out of a possible 5 on the Fragility Index. The stability we see now does not guarantee stability in the future; rather, it presages disorder and instability as the "just borrow/print another couple trillion" fixes fail to repair the systemic rot.

Duct-taping a failing Status Quo together with borrowed trillions is not anti-fragility.