The Undebtors: Sworn Enemies of the Vampires of Debt

Those who refuse debt, regardless of the sacrifice, are starving the parasitic, exploitive machine; those with debt are feeding it.

We hear a lot about debtors, and very little about undebtors. I define an undebtor as an individual or entity that has sworn off debt or considers debt a necessary evil that must be paid off as quickly as possible regardless of the sacrifices required to do so.

Undebtors are created by these conditions:

2. People who have been crushed by debt in the past and refuse to repeat the experience.

3. People who recognize debt as the status quo's favored instrument of oppression, control and exploitation.

4. People who understand that paying off debt is the easiest way to earn a zero-risk significant return on one's money.

If you pay off a 12% credit card, that's the equivalent of earning 12% on your money.

There's no mystery as to the low profile of undebtors in the mainstream media: undebtors are the equivalent of the cross to the vampire-parasites peddling debt. How can banks and other financial parasites make money off the undebtors? They can't, and therein lies the problem for the status quo, which lives off the blood of debt extracted from debt-serfs. 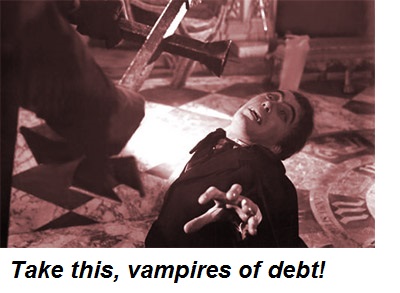 The profits skimmed off debt fuel the speculative gambles that benefit Wall Street, and fund the politico lackeys and toadies who enforce the power of banks and Wall Street.

Debt also funds insurance companies and pension funds. Remember, every student loan dragging a starving student into servitude is owned by a pension fund or insurer as a solid, high-yield asset and every subprime auto loan that is extracting a pound of flesh from a marginal borrower feeds Wall Street's profit machine.

People talk about starving the machine. You want to truly starve the machine? Get out of debt and stay out of debt, regardless of the sacrifices needed to do so. I personally know many immigrants to the U.S. who paid off 30-year mortgages in four years or less. How did they do it?

1. Everyone in the family 16 or older worked.

2. Everyone's earnings went to pay off the mortgage.

There was a saying in the 1960s--you're either part of the solution or you're part of the problem. Those who refuse debt, regardless of the sacrifice, are starving the parasitic, exploitive machine; those with debt are feeding it.

Yes, I have debt, too, but we are doing everything in our power to pay it off as soon as possible. That's all anyone can do. But it's important to do so, starting now.