What If All the Cheap Stuff Goes Away?

Nothing stays the same in dynamic systems, and it's inevitable that the current glut of low costs / cheap stuff will give way to scarcities that cannot be filled at current low prices.

One of the books I just finished reading is The Fate of Rome: Climate, Disease, and the End of an Empire. The thesis of the book is fascinating to those of us interested in the rise and fall of empires: Rome expanded for many reasons, but one that is overlooked was the good fortune of an era of moderate weather from around 200 BC to 150 AD: rain was relatively plentiful/ regular and temperatures were relatively warm.

Roman technology and security greatly expanded trade, opening routes to China, India and Africa that supplied much of Roman Europe with luxury goods. The Mediterranean acted as a cost-effective inland sea for transporting enormous quantities of grain, wine, etc. around the empire.

These trade routes acted as vectors for diseases from afar that swept through the Roman world, decimating the empire's hundreds of densely populated cities whose residents had little resistance to the unfamiliar microbes.

Rome collapsed not just from civil strife and mismanagement, but from environmental and infectious disease pressures that did not exist in its heyday.

Colder, drier weather stresses the populace by reducing their food intake, which leaves them more vulnerable to infectious diseases. This dynamic was also present in the 15th century during another mini ice age, when the bubonic plague (Black Death) killed approximately 40% of Europe's population.

Which brings us to the present: global weather has been conducive to record harvests of grains and other foodstuffs, and I wonder what will happen when this run of good fortune ends, something history tells us is inevitable. Despite the slow erosion of inflation, food is remarkably cheap in the developed world.

What happens should immoderate weather strike major grain-growing regions of the world?

Then there's infectious diseases.  Global air travel and trade has expanded the spectrum of disease vectors to levels that give experts pause.  The potential for an infectious disease that can't be mitigated to spread globally is another seriously under-appreciated threat to trade, tourism and cheap stuff in general.

There are other factors that could spell the end of cheap stuff, not just food but manufactured goods:

1. Fossil fuels could become much more costly. While I consider it highly likely that the price of oil in US dollars will fall to $40/barrel or lower in a global recession due to a sharp drop in demand (what I've long termed the head-fake), longer term, it's inevitable that the cheap-to-access fossil fuels (other than coal) will become depleted and the cost of accessing, processing and transporting what's left will rise.

Since fossil fuels remain the backbone of industrial societies everywhere (yes, including Germany), a steady increase in fuel costs will push the cost of everything that uses energy (i.e. everything) higher.

If trade is restricted for whatever reason, the costs of commoditized goods will likely increase, possibly by a lot.

3. Global wages are rising. You've probably seen signs at Home Depot and fast-food chain outlets announcing "we're hiring": even though 100 million working-age people are "not in the work force" in the U.S., many of these individuals lack the skills and/or willingness to take jobs in the modern economy, which demand a lot of workers even in so-called low-skill fields such as fast food. To work in fast food, individuals must be able to handle high pressure and a fast pace; it's not an easy job by any means.

Many employers are reporting that they can't find enough qualified candidates who pass drug tests, yet another fallout of the opioid epidemic. Many people are saddled with felony convictions for nonviolent drug offenses, rendering them ineligible for most corporate or government employment.

Immigration restrictions and minimum wage laws will add to the rising cost of labor.

Globally, the baby Boom generation is retiring, leaving worker shortages on the horizon even in China. (Note that workers tend to retire much earlier in Asia and Europe than in the U.S.: 60 or 62 is typically the mandatory retirement age in much of the global economy.)

As Immanuel Wallerstein has observed (I've written about his work many times), there are systemic, secular pressures to raise wages and benefits everywhere: costs are rising, and people expect more government services such as education and income security, and as taxes increase, wages must rise to maintain the net earnings (purchasing power) of the workers.

We in North America have become accustomed to cheap stuff; we consider it our birthright: cheap fuels, cheap manufactured goods, cheap food and cheap labor. Without even being aware of it, we feel entitled to "low prices always." We may feel fuel, food and consumer goods are expensive now, but we are comparing prices to an extended period of extraordinarily low costs.

Prices for energy could easily rise 50%, impacting the cost of everything; should harvests be crippled by bad weather, the cost of grains could easily double or triple from their current historic lows. Should trade be restricted and wages rise virtually everywhere, manufactured consumer goods could go up in price even as robots replace human labor: energy and raw materials will still be costly inputs even if all human labor is eliminated.

Add in some stiff tariffs for unfair trade practices, and all the robots in the world won't keep prices down.

Nothing stays the same in dynamic systems, and it's inevitable that the current glut of low costs / cheap stuff will give way to scarcities that cannot be filled at current low prices. Cheap stuff will go away, and everything will cost more. It seems highly likely that the next decade will not be like the last 10 years of abundance and cheap stuff.

Courtesy of Incrementum AG, here is a chart of the commodity/S&P 500 ratio. Commodities are at historic lows in relation to stock market valuations. Stocks can decline, or commodities can rise, or both can occur in tandem. If history is any guide, this ratio will reverse and reach a peak within the next decade. 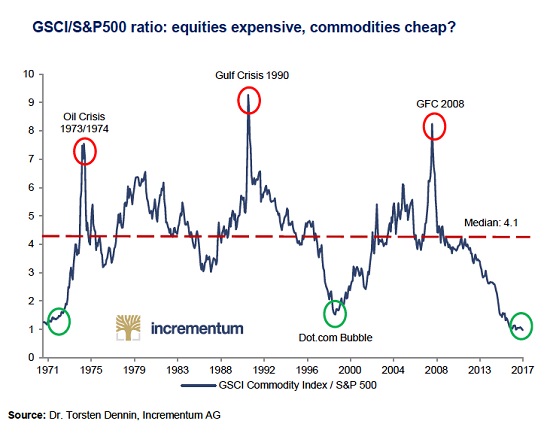 Thank you, Clayton G. ($100), for your splendidly generous pledge to this site -- I am greatly honored by your steadfast support and readership.