There are only two ways to survive a decline in income and net worth: slash expenses or default on debt.

In post-World War II America, the cultural zeitgeist viewed frugality as a choice: permanent economic growth and federal anti-poverty programs steadily reduced the number of people in deep economic hardship (i.e. forced frugality) and raised the living standards of those in hardship to the point that the majority of households could choose to be frugal or live large by borrowing money to enable additional spending. Either way, rising income and net worth would raise all ships, frugal and free-spending alike.

For everyone above the bottom 20%, frugality was viewed as a sliding scale of choice: if you couldn't increase your income fast enough, then borrow whatever money you needed. If you chose to be frugal, in moderation (i.e. clipping coupons and shopping for the cheapest airline seats, etc.) this was viewed as admirable fiscal prudence; if pushed beyond moderation then it was dismissed as counter to the American spirit of everlasting expansion: tightwad is not an endearment.

Thus none of us immoderately frugal folks ever fit in. Our frugality raised eyebrows and drew derogatory exhortations from indebted free-spenders to "get out there and live a little," i.e. blow hard-earned money on aspirational gewgaws or status-enhancing fripperies, including the oh-so-precious "experiences" that have now replaced gauche physical markers of status-climbing.

We are now entering a new era of forced frugality in which incomes and net worth stagnate or decline while the cost of living rises and borrowing is no longer frictionless.

To say that these changes will shock the system is putting it mildly. Here's the key dynamic in forced frugality: income can drop precipitously without any ratcheting to slow the decline, but costs only ratchet higher, or decline by nearly imperceptible degrees; that is, costs are "sticky" and refuse to slide down as easily as income.

The second key dynamic in forced frugality is the tightening of lending and the rising cost of borrowed money. When lenders could assume that almost every household's income would increase as a byproduct of ceaseless economic expansion, and assets such as stocks, bonds and houses would always increase in value (any spots of bother are temporary), then the odds of a nasty default (in which the borrower stiffs the lender--no monthly payments to you, Bucko)--were low.

But once incomes and asset valuations are more likely to fall than rise, the door to lending slams shut. Why would lenders extend loans to households and enterprises that are practically guaranteed to default? Any lender that self-destructive would soon be stripped of their capital and solvency.

The general assumption is that since central banks are buying bonds, interest rates for borrowers can only go down. This assumption is misguided. The base assumption of all lenders is that a very thin layer of borrowers will default. Once this layer thickens, it makes no sense to lend to everyone who can fog a mirror.

Unwary lenders are about to learn a very painful lesson about the creditworthiness of supposedly solvent middle-class households: since income isn't "sticky," households that had high credit scores for years can quite suddenly default on their loans once their incomes plummet.

As for the borrower's assets, those too can plummet in value, leaving the lender with zero collateral or an asset for which there is no buyer, regardless of the appraised value.

The income/assets slope is greased while the cost slope is on a resistant ratchet. Income can slide down effortlessly while costs stubbornly refuse to fall.

The net result of this dynamic is forced frugality. For the first time in decades, households and enterprises cannot count on a resumption of growth in a few months and higher incomes and asset valuations.

To the dismay of living-large-on-debt households and enterprises, the only way to get more than you have now will be to save, save, save cash. Earning more from one's labor will be difficult, as will reaping easy speculative gains from simply owning assets.

The debt-free frugal may be forgiven for indulging in a bit of schadenfreude toward those who scorned frugality in favor of living large in the moment. Now who's living large? Not the extremely frugal, because squandering money gives them no pleasure, and they prefer the anti-status "status" of old cars and trucks, tools that have lasted decades and assets that look like everyone else's except they're debt-free.

As for income--those who control and invest their own capital and labor, the class I've long called mobile creatives--will have far more opportunities than those chained to the monoculture plantations of corporate cartels and government agencies squeezed by collapsing tax revenues.

And many frugal people who did the best they could with limited income will find that even extreme frugality can't fix a decline in income.

An economy-wide reckoning of what's essential is just starting. Netflix subscription? Gym membership? Fast food takeout a couple times a week? No, no and no. A thousand no's as there are only two ways to survive a decline in income and net worth: slash expenses or default on debt. Both are toxic to "growth" in spending and debt. 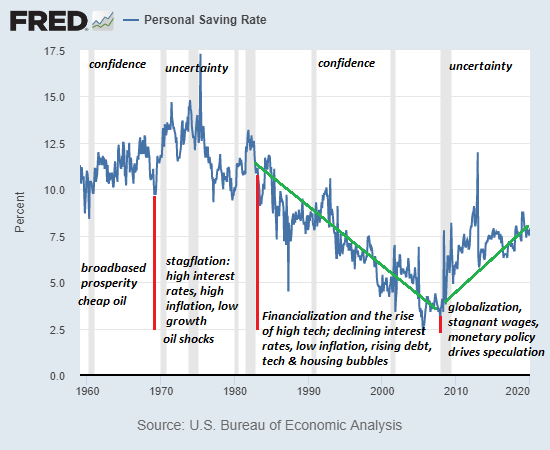