What Lies Beyond Capitalism and Socialism?

The status quo, in all its various forms, is dominated by incentives that strengthen the centralization of wealth and power.

As longtime readers know, my work aims to 1) explain why the status quo -- the socio-economic-political system we inhabit -- is unsustainable, divisive, and doomed to collapse under its own weight and 2) sketch out an alternative Mode of Production/way of living that is sustainable, consumes far less resources while providing for the needs of the human populace -- not just for our material daily bread but for positive social roles, purpose, hope, meaning and opportunity, needs that are by and large ignored or marginalized in the current system.

One cognitive/emotional roadblock I encounter is the nearly universal assumption that there are only two systems: the State (government) or the Market (free trade/ free enterprise). This divide plays out politically as the Right (capitalism, favoring markets) and the Left (socialism, favoring the state). Everything from Communism to Libertarianism can be placed on this spectrum.

But what if the State and the Market are the sources of our unsustainability? What if they are intrinsically incapable of fixing whats broken?

The roadblock here is adherents to one camp or the other are emotionally attached to their ideological choice, to the point that these ideological attachments have a quasi-religious character.

I often feel like Ive been transported back to the 30 Years War between Catholics and Protestants in the 1600s.

Ive written numerous books that (in part) cover the inherent limits of markets and the state, so Ill keep this brief. Markets are based on two premises: 1) profits are the key motivator of human activity and 2) whatever is scarce can be replaced by something that is abundant (for example, when weve wiped out all the wild Bluefin tuna, we can substitute farmed catfish.)

But what about work that creates value but isnt profitable? This simply doesnt compute in the market mentality. Neither does the fact that wiping out the wild fisheries disrupts an ecosystem that is essentially impossible to value in terms that markets understand: in a market, the supply and the demand in this moment set the price and thus the value of everything.

But ecosystems simply cannot be valued by the price set in the moment by current supply and demand.

As for the state, its ontological imperative is to concentrate power, and since wealth is power, this means concentrating political and financial power. Once bureaucracies have concentrated power, insiders focus on securing budgets and benefits, and limiting transparency and accountability, as these endanger the insiders power, security and perquisites.

Both of these systems share a single quasi-religious ideology: a belief that endless economic growth is an intrinsic good, for it is the ultimate foundation of all human prosperity. In other words, we can only prosper and become more secure if were consuming more of everything: resources, credit, energy, and so on.

This ideology assumes a winner take most structure of winners and losers, with the winnings being concentrated in the hands of a few at the top of the Winners. Thus rising inequality and divisiveness are assumed to be the natural state of any economy.

This ideology underpins the entire status quo spectrum. The "growth at any cost is good" part of the single ideology underpinning the status quo is captured by the 1960 Soviet-era film Letter Never Sent; in its haunting, surreal final scene, a character envisions a grand wilderness untouched by human hands transformed into an industrial wasteland of belching chimneys and sprawling factories. This was not a nightmare--this was the Soviet dream, and indeed, the dream of the "growth at any cost is good" West.

Simply put, the status quo of markets and states is incapable of DeGrowth, i.e. consuming less of everything, including credit, "money", profits, taxeseverything that fuels both the state and the market. As I have taken pains to explain, it doesnt matter if a factory is owned by private owners or the state: the mandate of capital is to grow. If capital doesnt grow, the resulting losses will sink the enterpriseincluding the state itself.

What lies beyond "growth at any cost" capitalism and socialism? My answer is the self-funded community economy, a system that is self-funded (i.e. no need for a central bank or Treasury) with a digital currency that is created and distributed for the sole purpose of funding work that addresses scarcities in local communities.

I outline this system in my book A Radiocally Beneficial World: Automation, Technology and Creating Jobs for All.

This community economy recognizes that some work is valuable but not profitable. The profit-driven market will never do this work, and the central state is (to use Peter Druckers term) the wrong unit size to ascertain each communitys needs and scarcities.

Clearly, we need a socio-economic-political system that has the structure to not just grasp the necessity of DeGrowth and positive social roles (work benefiting the greater community) but to embrace these goals as its raison detre (reason to exist).

Human activity is largely guided by incentives, both chemical incentives in our brains and incentives presented by the society/economy we inhabit. In the current system, concentrating power and wealth in the hands of the few at the expense of the many and wasting resources / destroying ecosystems are incentivized if the activity is profitable to some enterprise or deemed necessary by the state.

In the current system, the state incentivizes protecting its wealth and power and the security/benefits of its insiders, and markets incentivize maximizing profits by any means available.

As I have explained many times in the blog and my books, we inhabit a state-cartel economy: the most profitable form of enterprise is the quasi-monopoly or cartel that limits supply and competition in order to extract the maximum profit from its customers.

Monopolies (or quasi-monopolies such as Google, which holds a majority share of global search revenues, excluding China) and cartels quickly amass profits which they then use to secure protection of their cartel from the state via lobbying, campaign contributions, etc. The elites controlling the state benefit from this arrangement, and so the system inevitably becomes a state-cartel system dominated by the state and private sector cartels and incentives that benefit the wealth and power of these institutions.

Once we understand the inevitability of this marriage of state and cartel, we understand socialism and capitalism--the State and Markets--are the yin and yang of one system. Reformers may recognize some of the inherent limits of the state and the market, but they believe these problems can be solved by tweaking policies--in systems-speak, modifying the parameters of the existing subsystems of lawmaking, the judiciary, regulatory agencies, and so on.

But as Donella Meadows explained in her classic paper, Leverage Points: Places to Intervene in a System tweaking the parameters doesnt actually change the system. For that, we must add a new feedback loop.

The status quo, in all its various forms, is dominated by incentives that strengthen the centralization of wealth and power, increase inequality and divisiveness and the permanent expansion of consumption and credit. That this path leads to implosion / collapse does not compute because the status quo is constructed on the fundamental assumption that permanent growth/expansion of consumption, credit, wealth and state power is not just possible but necessary.

As many of us have labored to show, the financial system has been pushed to unprecedented extremes to maintain the illusion that rapid growth of consumption and credit can be maintained essentially forever.

We need an alternative system thats built on sustainable incentives and feedback loops so we have a new blueprint to follow as the current arrangement unravels in the next decade or two.

Security and prosperity are worthy goals, but the means to achieve them, as well as the definition of security / prosperity, must be reworked from the ground up. We need to include positive social roles and meaningful work as essential components of security/prosperity.

My conception of a Third / Community Economy does not replace either the state or the free-enterprise market; rather, it does what neither of the existing structures can do. It adds opportunity, purpose, positive social roles and earned income for those left out of the state/cartel/market economy. 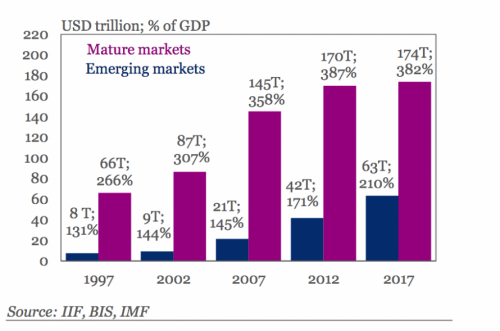 Thank you, Dave S. ($5/month), for your wondrously generous pledge to this site -- I am greatly honored by your support and readership.