Taking the Pulse of a Weakening Economy

Corporate buybacks provide the key analogy for the economy as a whole.

Central banks have been running a grand experiment for 9 years, and now we're about to find out if it succeeds or fails. For 9 unprecedented years, central banks have pushed the pedal of monetary stimulus to the metal: near-zero interest rates, monumental purchases of bonds, mortgage-backed securities, stocks and corporate bonds, injecting trillions of dollars, yuan, yen and euros into the global financial system, all in the name of promoting a "synchronized global recovery" that in many nations remains the weakest post-World War II recovery on record.

The two goals of this unprecedented stimulus were 1) bringing consumption forward and 2) generating a "wealth effect" as the owners of assets rising in value would translate their perception of feeling wealthier into more borrowing and consumption that would then feed a self-sustaining virtuous cycle of expansion.

The Federal Reserve has finally begun reducing its stimulus programs of near-zero interest rates and bond purchases, the idea being that the "recovery" is now robust enough to continue without the extraordinary monetary stimulus of the past 9 years since the Global Financial Meltdown of 2008-09.

2018 is the first test year. Global assets--stocks, bonds and real estate--remain at levels that are grossly overvalued by traditional measures, and most economies are still expanding modestly. But since the other major central banks have only recently begun to "taper" / reduce their securities purchases, the real test has yet to begin.

The pulses of asset valuations and productive expansion are weakening. Asset valuations are either no longer expanding or are actively falling; markets everywhere feel heavy, as if all they need is one good shove to slip into major declines.

The vaunted "wealth effect" was extremely asymmetric: only those in the top 5% who owned enough assets to experience a meaningful increase in wealth--those who bought assets years before the current bubble expanded, and the relative few households who own roughly 70% of all financial assets--and the few workers and entrepreneurs who benefited from an increasingly "winner take most" expansion.

As a result, the enormous increases in assets had little real effect on the bottom 80% who own few assets, and only modest effects on the "middle class" between the bottom 80% and the top 5%.

The reality nobody dares acknowledge is that a "recovery" based not on improving productivity and innovation but on cheap credit and an artificially stimulated "wealth effect" was inherently weak, for the stimulus effectively hollowed out the productive economy in favor of the financialized, speculative economy and created perverse incentives to over-borrow and over-spend, stripping future demand to create the illusion of growth in a stagnating economy of rising wealth and power inequality.

A funny thing happens when you borrow from the future to spend more today--the future arrives, and we find the pool has been drained to serve the absurd policy goal of "no recession now, or ever again."

Corporate buybacks provide the key analogy for the economy as a whole: as sales, productivity and profits all stagnate, corporations borrow against future earnings to buy shares back from investors to push share prices higher, creating an illusion of "wealth." But it's all illusion; once the billions in buybacks cease, gravity takes hold and the phantom "wealth" dissipates.

Apple is simply the latest corporation to announce slowing sales growth and to compensate for this stagnation with a massive $100 billion buyback to prop up shares at their current valuation.

Perhaps these realities are seeping into the margins of the complacent herd. It certainly feels like the "smart money" is selling (distributing) to the complacent herd, which is one lightning strike and thunder clap away from a panicked rush to sell and book 9 years of gains before the synchronized global asset bubbles all pop.

Markets have ignored the tapering of central bank support (asset purchases), but the question remains: is this complacency temporary? 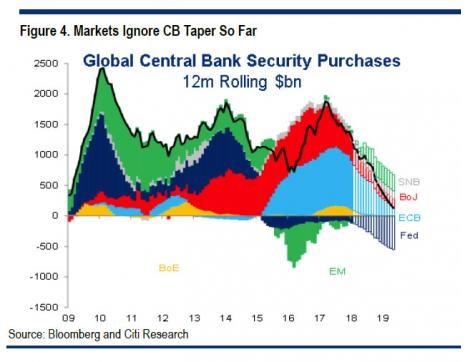 Productivity is the only sustainable source of widespread prosperity, and it's stagnating:

Thank you, Clive H. ($5/month), for your wondrously generous pledge to this site -- I am greatly honored by your support and readership.