The fragile ice shelf of speculative bets and debt clinging to the mountainside is making strange creaking sounds-- will you listen or will you ignore it because 'the Fed has our back'?

Feast your eyes on the chart below of the Nasdaq 100 stock market Index, which is dominated by the six FAAMNG (rhymes with "famine") stocks: Facebook, Apple, Amazon, Microsoft, Netflix and Google which now account for over 20% of the entire U.S. stock market's capitalization.

Notice that despite the global economy sliding into a debt-bust depression, the NDX is within kissing distance of new all-time highs. You're joking, right? Sales and profits won't slide as the depression steps on the neck of hundreds of millions of households?

As you've probably heard by now, sales don't matter, profits don't matter, costs don't matter, and indeed, nothing matters but the Fed has our back so buy stocks, never mind the valuations. In other words, the U.S. stock market has reached the spiritual level where the corporeal tangible world no longer matters: in a word, Nirvana, or Heaven if you prefer.

If we set aside the satire and the absurd justifications of the financial punditry ( "we see a V-shaped recovery of profits in 2023, or was it in 2032? Never mind, doesn't matter..."), we discern a reality that should worry us: America's economy and financial system cannot allow the stock market to decline because any sustained drop will pop the debt-bubble and bring the entire rickety, rotten, corrupt structure down.

Erecting $100 trillion of phantom capital on speculative bets and disconnected-from-reality valuations was always doomed: piling one layer of debt and speculative excess on top of another while the actual collateral supporting the first layer of debt didn't actually change steadily increases the fragility of the entire pyramid.

Now the system is too fragile and brittle to survive even a modest drop in the stock market. Since the Federal Reserve and other tools of the financial-political elites can't increase the productivity of the underlying collateral of the economy, they're forced to manipulate the one signaling device they can control, which is the stock market.

And since they can't actually improve the productivity or prospects of several thousand companies, they've poured their conjured trillions in six mega-stocks to drag the entire market higher. The more money they pour into the Big Tech Six, the greater the market capitalization of these companies and therefore the greater their influence in the stock indices: the Dow Jones Industrial Average, the S&P 500 and the Nasdaq / Nasdaq 100.

It's a self-reinforcing set-up: dump another trillion in the six mega-cap stocks and this pushes the entire market higher. The influence of the real world has been reduced to zero. Nirvana indeed.

The problem is that any system this fragile and brittle cannot survive the slightest contact with reality. The system's stability is an elaborate illusion maintained by the Big Con of the Federal Reserve: we can create as many trillions as we need to prop up the stock market.

This is the hubris and arrogance of mortals claiming god-like powers. As the Fed and other central banks buy every over-valued financial asset in sight to prop up over-valued markets, eventually they will own the majority of the markets (as per the Japanese bond market). At some point there won't be any assets left for private capital to own that actually earn a return. With interest rates at zero or lower, private capital has no way to earn a return--an outcome that collapses the entire rickety, rotten, corrupt structure anyway.

Extreme concentrations of wealth and power, extreme speculative risk, extreme over-valuation, extreme central bank manipulation--all increase fragility and brittleness. America's financial system is the classic tightly bound system with all the lines of dominoes intersecting each other: any one domino will take down the entire system because it's all tightly connected and dependent on extremes of risk, speculation, debt and manipulation (stock buybacks being Exhibit #1).

The Gods of Finance are chuckling as the Fed's trillions push the system ever closer to collapse. No matter what the Fed does, no matter how many billions Apple borrows and throws into the putrid sewage of its endless stock buybacks, the market, the financial system and the economy that has become dependent on those speculative pyramids of debt are doomed to collapse for profoundly systemic reasons.

The fragile ice shelf of speculative bets and debt clinging to the mountainside is making strange creaking sounds-- will you listen or will you ignore it because the Fed has our back? The avalanche will catch everyone by surprise when it finally breaks, and the consequences will be non-linear and therefore disruptive in ways few anticipate.

But in the meantime, please enjoy the cosmic joke of the Nasdaq 100 and Jay Powell's deadpan comedy routine. But be careful that the joke doesn't end up on you: an economy that cannot allow stocks to decline is too fragile to survive. 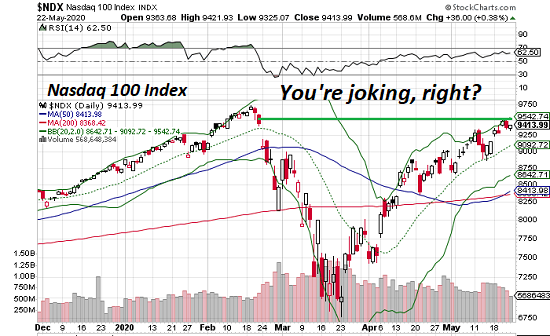 Our Inevitable Collapse: We Can't Save a Fragile Economy With Bailouts That Increase Fragility May 1, 2020