What nobody dares whisper is 'there is no alternative to collapse' because the system is now too fragile and brittle to survive.

Terrible for who? To answer the question, we need to ponder the fundamental nature of the Fed and our financial system, which can be summarized in one line: anything goes, and winners take all.

Anything goes, because money buys political influence and so what was once illegal--buying back your own stock, advertising medications directly to consumers, etc.-- are not just made legal but normalized by constant propaganda in the corporate media that these forms of legalized looting are good for the nation because... well, that doesn't matter, just take our word for it.

When anything goes, the winners take all. This is how we've ended up with a unstable, fragile economy dominated by a handful of corporations in each sector whose sole purpose is to maximize profits by any means available, and it just so happens the most profitable arrangements are monopoly and cartels, and so that's what we have: an economy of high costs, enormous profits, low-quality goods and services for the bottom 95% and an extreme concentration of wealth and income in the hands of the winners.

This dynamic also characterizes the public sector, where anything goes if you can get away with it has generated a few winners-- employees of small school districts getting salaries of $350,000 and pensions to match, and so on--and a multitude of losers as actual services for the public decay even as costs soar. Naturally, questions about this are dismissed with TINA: there is no alternative.

The fragility of such a system is so extreme that the winners' only hope to hold onto their booty is to persuade us that the simulations of open markets and democracy they conjure up are "real" in the sense that we can't really see the Emperor's fine clothing but we accept that this must be a flaw in our own sight, rather than what it really is: self-serving institutionalized delusion: believe us when we assure you that there is no alternative.

What nobody dares whisper is there is no alternative to collapse because the system is now too fragile and brittle to survive. TINA may get the last laugh after all. 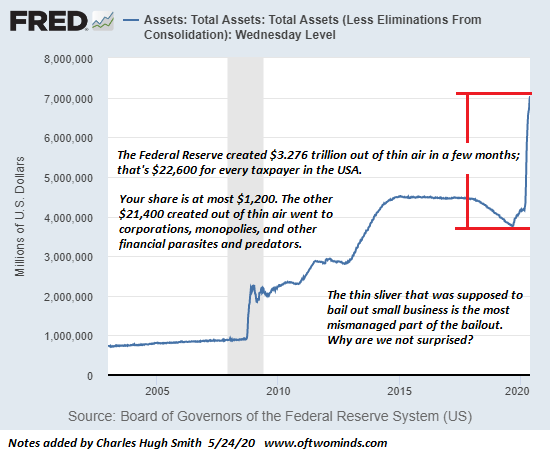