Understanding the Global Recession of 2019

Isn't it obvious that repeating the policies of 2009 won't be enough to save the system from a long-delayed reset?

2019 is shaping up to be the year in which all the policies that worked in the past will no longer work. As we all know, the Global Financial Meltdown / recession of 2008-09 was halted by the coordinated policies of the major central banks, which lowered interest rates to near-zero, bought trillions of dollars of bonds and iffy assets such as mortgage-backed securities, and issued unlimited lines of credit to insolvent banks, i.e. unlimited liquidity.

Central governments which could do so went on a borrowing / spending binge to boost demand in their economies, and pursued other policies designed to bring demand forward, i.e. incentivize households to buy today what they'd planned to buy in the future.

This vast flood of low-cost credit and liquidity encouraged corporations to borrow money and use it to buy back their stocks, boosting per-share earnings and sending stocks higher for a decade.

The success of these policies has created a dangerous confidence that they'll work in the next global recession, currently scheduled for 2019. But policies follow the S-Curve of expansion, maturity and decline just like the rest of human endeavor: the next time around, these policies will be doing more of what's failed.

The global economy has changed. Demand has been brought forward for a decade, effectively draining the pool of future demand. Unprecedented asset purchases, low rates of interest and unlimited liquidity have inflated gargantuan credit / asset bubbles around the world, the so-called everything bubble as most asset classes are now correlated to central bank policies rather than to the fundamentals of the real-world economy.

Keenly aware that they've thinned their policy options and financial buffers to near-zero, central banks are struggling to normalize their policies by raising rates, reducing their balance sheets by selling assets and tightening lending conditions / liquidity.

Unfortunately for central banks, global economies are now junkies addicted to zero interest rates and central bank stimulus / support of bond markets, stock markets and real estate markets. The idea of normalization is to slowly inch the financial system and economy back to levels that were normal in previous eras, levels that allowed some room for central banks to respond to recessions and global financial crises by lowering rates and extending credit to insolvent lenders.

But reducing the drip of financial heroin hasn't ended global economies' addiction to extraordinary easy financial conditions. Rather, it's illuminated the dangers of their continued addiction.

As soon as authorities attempt to limit their support / stimulus, markets wobble into instability. The entire economic structure of "wealth" is now dependent on asset bubbles never popping, for any serious decline in asset valuations will bankrupt pension funds, insurers, local governments, zombie companies and overleveraged households--every entity which is only solvent as long as asset bubbles expand or maintain current valuations.

So how do central banks normalize their unprecedented policies without popping the asset bubbles they've created? The short answer is: they can't. Rising interest rates are a boon to savers and Kryptonite to borrowers--especially over-leveraged borrowers who must roll over short-term debt and borrow more just to maintain the illusion of solvency.

As if this wasn't enough to guarantee recession in 2019, there's the unintended consequences of capital flows. Capital famously flows to where it's treated best, meaning wherever it earns the highest yields at the lowest risk, and where the rule of law protects capital from predation or expropriation.

When all central banks pursued roughly the same policies, capital had options. Now that the Fed has broken away from the pack, capital has only one option: the U.S. The Federal Reserve should have begun normalizing rates etc. back in 2013, and if they'd been wise enough to do so then even baby steps over the past 5 years would have led to a fairly normalized financial environment. 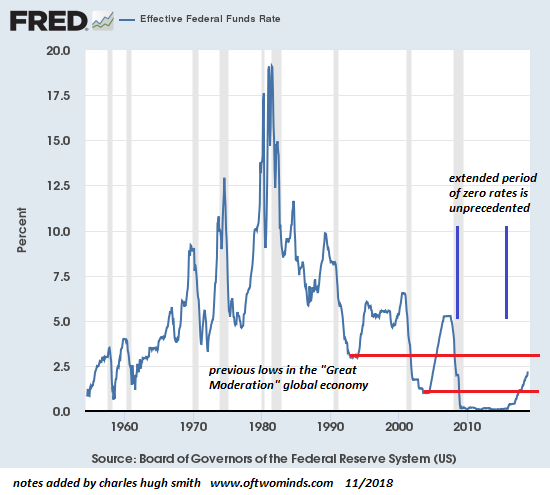 But Ben Bernanke and Janet Yellen blew it, so it's been left to the current Fed leadership to do the heavy lifting over a much shorter timeline. Predictably, pulling away the punch bowl has spoiled the asset-bubble party, and now all the asset bubbles are increasingly at risk of deflating.

But the yields and relative risk available in US-dollar denominated assets is starting to look a lot more attractive and lower risk than assets denominated in yen, yuan and euros. Capital flows tend to be self-reinforcing: as capital flows out of at-risk economies, it dampens investment, speculation and spending as the economy is drained of capital.

Owners of assets notice this decay and so they decide to sell and move their capital to safer ground. Selling begets selling, and pretty soon nobody's left to catch the falling knife, ie. buy assets that are rapidly losing value.

This is what surprised Alan Greenspan (by his own account) in 2008: bubbly markets quickly become bidless, that is, buyers vanish and sellers who want to unload their assets for cash find nobody's willing to part with cash for a plummeting asset.

The central bank "solution" to bidless markets is to become the buyer of last resort: when no sane investor will buy bonds, stocks or real estate, then the central bank starts buying everything in sight.

We are already seeing this in action as Chinese governmental agencies have started quietly buying empty flats in ghost buildings to prop up the housing market. The idea here is to restore confidence with a relatively modest burst of quiet buying. But when markets turn and confidence is lost, sentiment can't be restored so easily: sensing their last chance is at hand, sellers dump assets at a quickening pace, overwhelming the modest central bank buying.

This leaves the central bank with a stark and sobering choice: either let the asset bubble collapse and accept the immense destruction of "wealth," or buy the whole darn market. This is the unintended consequence of employing unprecedented policies for a decade: like using antibiotics every day for years, eventually resistance develops and the "fix" no longer works.

Isn't it obvious that repeating the policies of 2009 won't be enough to save the system from a long-delayed reset?

Thank you, Dale K. ($5/month), for your superbly generous pledge to this site -- I am greatly honored by your support and readership.