We Can Only Choose One: Our National Economy or Globalization

The servitude of society to a globalized economy is generating extremes of insecurity, powerlessness and inequality.

Does our economy serve our society, or does our society serve our economy, and by extension, those few who extract most of the economic benefits? It's a question worth asking, as beneath the political churn around the globe, the issues raised by this question are driving the frustration and anger that's manifesting in social and political disorder.

A recent essay examines these issues in light of Brexit, which the author sees as a manifestation of dramatic but poorly understood changes in Britain's economy over the past 60 years:

How Britain was sold: Why we need to rethink the case for a national capitalism in the age of uncertainty.

"One of the reasons Brexit has become unstuck is that the changing nature of the British economy since the 1970s and 1980s has made it hard to identify what the economic interests of the nation really are.

If nothing else, Brexit has been a long overdue education in the realities of Britainâs economy.

While both liberals and Marxists argue that the nationality of capitalism does not matter, there is a need to rethink the case for a national capitalism in this age of economic inequality, political fracture and geopolitical uncertainty. If nothing else, by embedding the economy more deeply into the nation and the daily lives of its citizens, and by directing itself towards national purposes and having a greater stake in developing national skills and innovations, a national capitalism would underline and reinforce that lost idea of the common good."

It's shocking to recall that Britain had a large and vibrant domestically owned auto industry in the 1960s, and remained a major industrial power / exporter.

Now the primary source of "wealth" (to indicate the inclusion of what may well be phantom wealth as well as real wealth) is the global financialization industry centered in London, which spins off enough income and wealth to attract and support millions of domestic and international migrants.

The author makes a critical distinction between economies which retained domestically domiciled ownership of key industries and resources (Germany, Japan, Italy) and those countries that allowed core industries and resources to be bought (and exploited) by corporations headquartered elsewhere (Britain and Sweden, whose Volvo brand is owned by China's Greely).

In the U.S., Chinese efforts to buy "strategically sensitive" corporations have been rebuffed for self-evident reasons of national security: do we really want a hostile power's companies to control criticial energy, manufacturing, banking and technology industries? The obvious answer is "no."

The neoliberal ideology glorifies the notions that everyone benefits from everything being turned into a global marketplace, in which price/cost are "discovered" by the global market and financial profit is a priori end all to be all: the most profitable transactions will benefit everyone by maximizing the return on capital.

By this neoliberal, globalization logic, every nation should happily sell its core assets if the price is high enough.

The flaws in this notion are glaring: geopolitical conflict hasn't been eradicated by globalization, even as global corporations are erasing national boundaries, and the nations that sold off all their national assets for a quick profit will be an extreme disadvantage in any conflict, as they are essentially hollowed-out shells dependent on (or exposed to leverage wielded by) foreign entities.

The author takes some pains to note that it's very difficult to untangle globalized supply chains. As I've often noted in the blog, China is considered the "source" of Apple's iPhones (i.e. an "exporter" of iPhones), but as little as $6-$12 of the $400 phones actually stays in China: the vast majority of the money flows to parts suppliers around the world and to Apple HQ in Cupertino CA for the marketing, intellectual property/software and branding.

There are still auto assembly plants in Britain, but the parts originate from many other countries and the profits flow overseas.

Does a fully globalized economy serve the national interest, which is fundamentally social and political? Or does globalization hollow out the nation to benefit the few who gain the most from the sloshing around of globalized private capital?

The basic claim of neoliberal globalization is that "free trade" enriches us all by lowering costs of production and boosting the efficiency of capital. But spiraling costs and stagnating productivity suggest this claim is either false or contingent on factors outside the simplistic model of neoliberalism.

My recent book Will You Be Richer or Poorer? Profit, Power and A.I. in a Traumatized World focuses on intangible capital, and certainly national control of key resources and industries is a form of intangible capital, as is autarchy / self-sufficiency. What is the value of not being dependent on other nations for the essentials of food, energy, technology and capital?

We might also ask, what sort of society results from the globalization of the economy? Brexit and many other uprisings against the status quo reflect the inconvenient realities of social decay and disorder: soaring wealth-income inequality, loss of social mobility, decline of economic security, and a winner-take-most economy that favors those with access to cheap credit (to buy up productive assets and buy back stocks) and monopolistic control of domestic and global markets.

Defenders of neoliberalism say that these ills result from sources other than globalization, but as this essay shows, the most fundamental changes in national economies are clearly the result of neoliberal globalization, which glorifies the free flow of capital and credit around the world, exploiting inefficiencies, low-cost labor, untapped resources, lax environmental regulations, corrupt governance and the general dominance of private capital over labor and national identity.

Defenders of neoliberalism defend the hollowing out of national economies by pointing to cheaper consumer prices for goods such as shoes and TVs. This presumes the only thing of any importance is the price consumers pay at the point of purchase: that the domestic job market has been reduced to insecure positions doesn't count, that homes are no longer affordable to domestic workers, that the national identity has been reduced to consumers driven solely by the endless quest for the lowest prices-- none of this has any value or meaning in a neoliberal, borderless world of maximizing profit and shareholder value.

This is not to say that trade is never mutually beneficial: trade and capital flows have been an economic reality for over 3,000 years, dating back to the very lively trade of the Bronze Age. What does need to be challenged is the largely unexamined notion that the critical interests of political entities (nation-states) and societies are magically served by private capital maximizing returns via borderless global markets.

This neoliberal ideology conceals a corrosive reduction of national and social interests to market price and profit, as if a lower price offsets the hollowing out of national economies and the destabilization of the social order.

(Recall that U.S.corporate profits expanded to unprecedented heights once China entered the WTO and became Corporate America's low-wage workshop. If corporations cut production costs by $5, $1 was passed on to the consumer, $4 was pure profit and the reduction in quality--never calculated, of course--was minus $10. In other words, the supposed benefit to consumers ended up being minus $9, as the reduction in quality, quantity and durability offset any modest reduction in price. If we consider all costs, including the decline in quality, moving the supply chain to China was a catastrophe for consumers, despite claims to the contrary.)

What sort of national economy does the U.S. have? It remains an open question, but what is not in doubt is the servitude of society to a globalized economy is generating extremes of insecurity, powerlessness and inequality that are increasingly destabilizing socially, politically and economically. 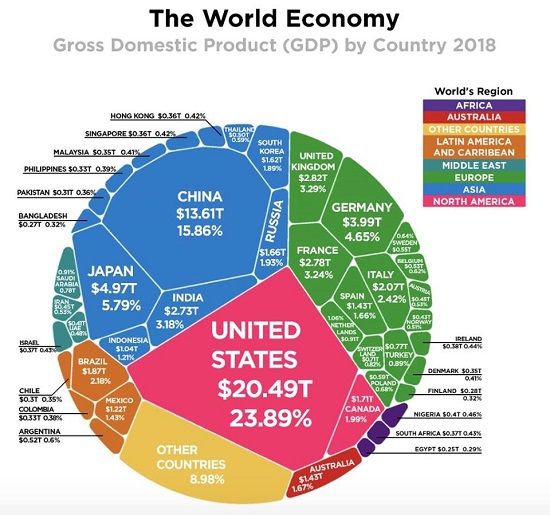