Stock Market Cheerleading: Why Do We Celebrate the Super-Rich Getting Richer?

It's not too difficult to predict a political rebellion against the machinery of soaring wealth and income inequality.

The one constant across the media-political spectrum is an unblinking focus on the stock market as a barometer of the national economy: every major media outlet from the New York Times to Fox News prominently displays stock market action, and TV news anchors' expressions reflect the media's emotional promotion of the market as the end all to be all: if stocks rose, the anchors are smiling and chirpy, and if the market fell then their expressions are downcast and dour.

This cheerleading of the stock market is based on an implicit assumption that the rising stock market raises all boats: a rising market is assumed to reflect an expansion of sales and profits that trickle down to the masses in higher wages, more jobs and rising 401K retirement accounts.

The reality is starkly different: the vast majority of the gains generated by a rising stock market flow to the top 10% households who own 93% of all financial assets, and the gains within the top 10% are highly concentrated in the top .01% of financiers, super-wealthy families and corporate managers who have reaped the vast majority of the past decade of stock market gains. 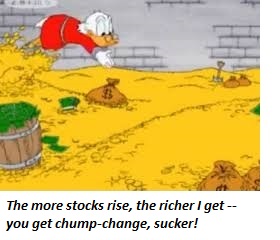 As my friend Adam T. recently observed: when we cheer the rising stock market, we're celebrating the super-rich getting even richer. Why are we celebrating an unprecedented widening of wealth inequality that erodes democracy (because the super-wealthy buy political influence) and the social contract (as the vast majority of wealth and power flow to the top .01%)?

Soaring wealth inequality is extremely destabilizing politically, socially and economically: much of the social unrest breaking out around the world can be traced to the political, social and financial disenfranchisement of the masses by super-wealthy elites.

Economically, soaring inequality concentrates and capital and power in the hands of the few, creating fertile ground for cartels and monopolies which raise costs without generating better services or more jobs. This dynamic is easily visible in the U.S.:

The U.S. Only Pretends to Have Free Markets: From plane tickets to cellphone bills, monopoly power costs American consumers billions of dollars a year.

Politically, the 90% who are losing ground seek political redress, generating tension in a political system dominated by the super-wealthy. Since the political machinery is controlled by the elite, the bottom 90%'s efforts to gain political redress will fail: Medicare for All (to take one example of many) is just an expansion of rapacious sickcare cartels that further concentrate wealth and power in the hands of the few at the expense of the many.

(Recall that 40% of Medicare spending is billing fraud, worthless or harmful meds and procedures and paper-pushing. All Medicare for All will accomplish is sickcare CEOs skimming $80 million a year in stock options will skim $160 million.)

In cheering advances in the stock market that benefit the financial and political elite, we're cheering the destabilization of our economy and society. Is that really something worth cheering?

At some point, people will awaken to the fact that the soaring stock market is the primary engine of soaring inequality, the erosion of democracy and the destabilization of the social order.

It's not too difficult to predict a political rebellion against the machinery of soaring wealth and income inequality, which will eventually lead to a severe reduction in the power of the Federal Reserve and its greed-driven dependent, Wall Street.

It's not just wealth that's concentrated in the hands of the top .01%--virtually all the income gains of the past decade of "recovery" have flowed to the top .01%: and the super-wealthy's response? Let them eat brioche, a response so disconnected from reality that it would be humorous were it not a reflection of a completely corrupt and rotten status quo.