As workforces shrink and opting out becomes increasingly attractive, Global Growth implodes on both the production and consumption sides.

A funny thing happened on the way to permanent global growth. Actually, three funny things happened. One is the cheap, easy-to-access materials that enabled a vast expansion of consumption have been pulled out of the ground and what's left will cost more going forward, meaning there will be less to squander on consumption.

True Believers are confident that some Savior Technology will emerge and scale up globally to save us from any nasty reduction in consumption, but they overlook the inconvenient fact that all the proposed Savior Technologies need vast quantities of the same materials that we've already consumed.

Two other funny things will also impact global growth: the sharp decline in birth rates in most developed and many developing nations--the Demographic Cliff--and the collapse of young workers' willingness to sacrifice themselves on the altar of Global Growth (i.e. systemic inequality) via working in miserable conditions for low pay--wages that will never enable the purchase of a home or support a family.

Since it's hopeless to secure "the good life," why bother sacrificing one's life? Why not enjoy life on a much more modest level?

This rejection of self-exploitation in service of further enriching the already-rich is global: The most descriptive terms are from China--laying flat and let it rot--but they apply to youth around the world.

Unfortunately for the already-rich benefiting from Global Growth, this puts upward pressure on global wages as employers have to offer higher wages to entice reluctant young workers: Younger Chinese are spurning factory jobs that power the economy (Reuters.com)

Higher wages might have some effect on the margins, but the real problem is vast wealth-income inequality created by hyper-financialization and hyper-globalization. Increasing wages by 10% isn't going to fix what's broken. Doubling wages and eliminating all taxes on labor would be a start. (Taxes on capital and financialization's churn would have to rise significantly to offset the elimination of taxes on labor.)

As the charts below indicate, the population of elderly living off the labor of the younger generations will soar, putting increasing financial pressure on governments and pension plans. Scrape away the hype and obfuscations and all pension/healthcare for the retired cohort are pay as you go, i.e. funded by taxes on the current workforce.

As that workforce shrinks, the burden will quickly become unbearable. Promises made when there were four workers for each retire break down when there's only 1.5 workers per retiree.

Many commentators are confident young workers will be forced by need to take miserable jobs at miserable rates of pay. I suspect these commentators don't understand the immense spectrum of options to opt out. In developing economies, young people can return to villages with family homes and grandparents. Young people in both developed and developing economies can take informal gig jobs that earn just enough to get by, or find ways to produce real goods and services on a modest scale.

As I've often discussed here over the years, opting out is the best strategy when things fall apart. Trying to maximize your self-exploitation leads to burnout. The decision to abandon self-exploitation in service of increasing the wealth of the already-rich opens the door to Self-Reliance in the 21st Century.

As workforces shrink and opting out becomes increasingly attractive, Global Growth implodes on both the production and consumption sides. Toss in higher costs due to the depletion of the easy-to-exploit materials and the foundations of Permanent Global Growth crumble into dust. 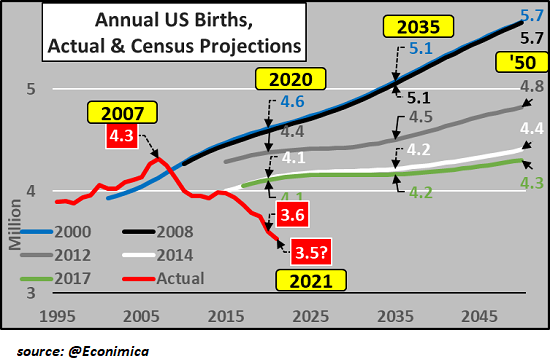 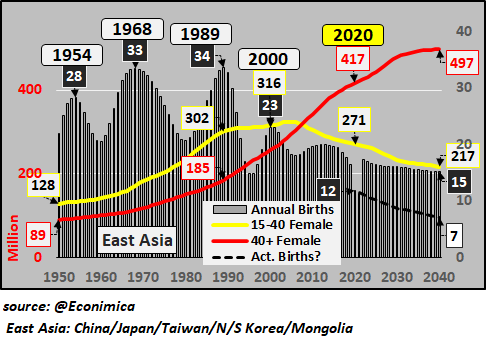 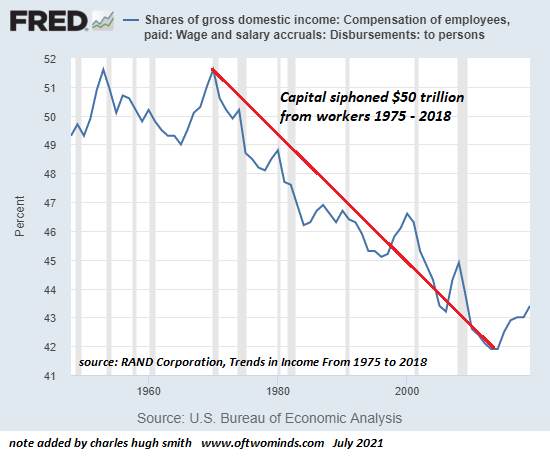