The defaults and currency crises in the periphery will then move into the core.

1. Save the banks by giving them credit-money at near-zero interest that they could loan out at higher rates. Savers were thrown under the bus by super-low rates (hope you like your $1 in interest on $1,000...) but hey, bankers contribute millions to politicos and savers don't matter.

2. Bring demand forward by encouraging consumers to buy on credit now. Nothing like 0% financing to incentivize consumers to buy now rather than later. Since a mass-consumption economy depends on "growth," consumers must be "nudged" to buy more now and do so with credit, since that sluices money to the banks.

3. Goose assets based on interest rates by lowering rates to near-zero. Bonds, stocks and real estate all respond positively to declining interest rates. Corporations that can borrow money very cheaply can buy back their shares, making insiders and owners wealthier. Housing valuations go up because buyers can afford larger mortgages as rates drop, and bonds go up in value with every notch down in yield.

This vast expansion of risk-assets valuations was intended to generate a wealth effect that made households feel wealthier and thus more willing to binge-borrow and spend.

All those intended consequences came to pass: the global economy gorged on cheap credit, inflating asset bubbles from Shanghai to New York to Sydney to London. Credit growth exploded higher as everyone borrowed trillions: nation-states, local governments, corporations and households.

While much of the hot money flooded into assets, some trickled down to the real economy, enabling enough "growth" for everyone to declare victory.

But the unintended consequences also came to pass: all that free-flowing credit enabled the monumental expansion of production capacity in virtually everything: the world is awash in productive capacity (over-capacity), which means producers (other than Apple) have very little pricing power.

Meanwhile, all the cheap debt that was spent on buying back shares boosted share prices but it didn't generate any gains in productivity or any new products: it just enriched the owners of shares.

In other words, the majority of that corporate debt binge was mal-invested: it boosted capacity beyond global demand and it was squandered on share buybacks. Now the debt service must be paid, but thanks to near-zero pricing power, corporations aren't making enough profit to even service debt.

In response, companies are cutting the quantity and quality of their goods and services to scrape up enough cash flow to roll over existing debt and borrow more money to maintain the appearance of solvency.

In effect, these corporations are zombies-- not among the living (solvent) but not yet dead (bankrupt). As interest rates rise, these zombies will find it increasingly difficult to roll over their immense debts and add additional debt to keep afloat.

There's one more unintended consequence: massive currency disruptions. When the Federal Reserve dropped Treasury bond yields to near-zero, they crushed the value of the U.S. dollar USD on global markets, effectively encouraging non-U.S. companies to take loans denominated in cheap dollars. As their domestic currencies rose against the USD, it became progressively cheaper to service their dollar-denominated debt.

But now that the Fed has raised interest rates, bond yields have soared, pushing the USD higher. Now the benefits of borrowing loans denominated in USD and paying the interest in other currencies have reversed: the strengthening USD has crushed emerging-market currencies, making it much more costly for companies to make their interest payments.

Zombie corporations in emerging markets using currencies that are in free-fall to service USD-denominated debt are doomed. If the loans were denominated in local currencies and issued by domestic emerging-market banks, nobody in the developed world would care. 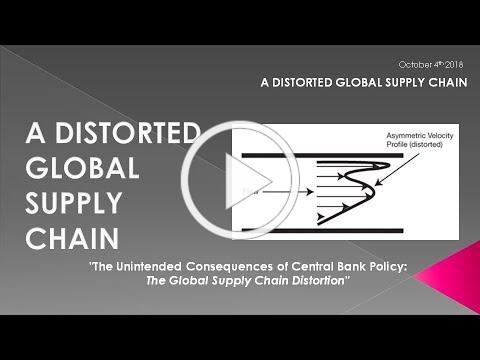 Thank you, James W. ($10/month), for your outrageously generous subscription to this site -- I am greatly honored by your support and readership.