This is only a partial list of what we've lost to globalism, cheap credit and the Tyranny of Price which generates the Landfill Economy.

A documentary on the decline of small farms and the rural economy in France highlights what we've lost in the decades-long rush to globalize and financialize everything on the planet-- what we call Neoliberalism, the ideology of turning everything into a global market controlled by The Tyranny of Price and cheap credit issued to corporations and banks by central banks.

After Winter, Spring (2012) was made by an American who moved to a small village in the Dordogne region of France to recover something of her childhood on a small Pennsylvania farm.

The farmers--self-described as paysans, peasants in English, (a translation I don't consider entirely accurate, for reasons too complex to go into here)-- describe the financial difficulties of earning enough to survive without outside jobs.

One young farmer who is taking over the family dairy from his aging parents encapsulates the economic reality of small farms: in the 1960s, they had 3 or 4 cows, now they have 100, but their income is the same.

Corporate mega-farms can produce huge quantities of agricultural products of questionable quality because they have the scale, access to cheap credit and expertise to deal with the voluminous bureaucratic paperwork imposed by the EU and the French government. (One slip-up on a form and you're sunk if you're a one- or two-person operation.)

Artisanal producers can't compete, and will never be able to compete in a global marketplace where there is always a cheaper source. (Up to half a small farmer's income comes from EU subsidies, which the EU is trying to cut.)

Financial survival requires one spouse have an outside job, or the farmers must operate farm tours, an onsite auberge (restaurant) or equivalent higher-margin business, all of which increases the capital they must borrow to fund the expansion and the risk of bankruptcy should the venture fail to cover its costs.

The documentary echoes the themes of an earlier French documentary, Profils Paysans, a three-part series of which only the third film Modern Life (2008) has English Subtitles.

The financial uncertainties and endless hard work are running up against generational realities: relatively few young people have the necessary passion for farming and the appetite for risk and hard work. Across the developed world, from Japan to the U.S. to France, there are few (if any) successors in line to take over the small family farms.

The small family farm--and the knowledge of how to grow food and raise animals--is dying away with the passing of our elderly farmers. The average age of farmers in many nations is well above 60. Many of the paysans (male and female) profiled in these documentaries are in their 80s.

The land is sold for residential development (i.e. exurb sprawl, overwhelming infrastructure such as roads, water systems, etc. designed for much small populations) or abandoned.

These documentaries only partially capture the enormous distance between "modern life" and the human-Nature relationship required to make land sustainably productive.

It's important to preserve wilderness, but we don't eat what grows or roams in wilderness. Wildlife can't survive solely on isolated preserves, either; Corporate Big Ag monoculture fields offer little to no habitat for wildlife.

Corporate Big Ag doesn't maintain the polycultures needed to support insects, birds and other wildlife; small farms provide niches and habitats for all sorts of life that doesn't serve a direct financial interest of the owners.

The widening divide between the modern lifestyle--completely ignorant and dismissive of rural productive polyculture--and those who still hold knowledge of artisanal, small-scale, localized production of high quality food--is already unbridgeable.

One elderly farmer described how his non-French neighbor complained about the cowbells on his few cattle. This resident's dogs could bark freely, but the cowbells were an annoyance beyond tolerance?

This is a manifestation of the complete alienation of "modern life" from the production of food. The modern urban/exurb resident doesn't want to smell hay (hay fever!) or manure (oh my, all animal poop should vanish instantly or I can't bear it) or any other exposure to the realities of raising livestock, killing animals so we can eat them or any other reality of food. All of these processes should be done thousands of miles away, and the food shipped by air in nice plastic containers to our supermarkets.

Neoliberal economists insist nothing has been lost; the plastic food in the plastic containers is "market efficiency" (never mind the dependence on cheap credit and cheap jet fuel). As for all the intangible economic, social and cultural capital that's been lost--it has no value in globalized Neoliberal economies.

One almost hopes that Corporate Big Ag disappears due to mono-crop plagues and people start going hungry to the point that they begin to take an interest in relearning all that's been cavalierly tossed away in favor of plastic food in plastic packaging and endless hours slumped on sofas "consuming" videos and "engaging" social media.

We've lost so much in the conquest of localized, small-scale polycultural farming by Neoliberal globalism and the dominance of cheap-credit-fueled Corporate Big Ag, yet we're only dimly aware of what's been lost because it isn't measured or valued in Neoliberal economies.

It's not just small farms that are being lost--it's the entire rural economy of villages and towns that are supported by farm income and products.

This is only a partial list of what we've lost to globalism, cheap credit and the Tyranny of Price which generates the Landfill Economy: always buy the cheapest corporate product-- price is all that matters, even if the quality is appalling. Just throw the low-quality items and food in the Landfill and buy new stuff on credit.)

These documentaries link directly to a 1,180 page two-volume work by historian Fernand Braudel, his last work:

The Identity of France: Volume One: History and Environment

The Identity of France: Volume Two: People and Production

I realize relatively few other readers would tackle a 1,200 page series with the same relish I have, or feel the same regret that I've finished the books, for my understanding of France, the history of agriculture, modern capitalism and prosperous rural economies is immeasurably richer.

What we've lost is a localized, resilient, diverse rural economy with a wealth of cultural and practical skills and wisdom. We only have a few years to save this immense wealth from complete and irretrievable loss.

What we've lost, whether we measure it or not is the subject my new book, Will You Be Richer or Poorer? Profit, Power and A.I. in a Traumatized World; (Read the first section for free (PDF). The book explores all the forms of wealth that we've lost or squandered. This applies not just to rural life and the rural, localized economy, but to our urban life, our society, our culture and our economy. 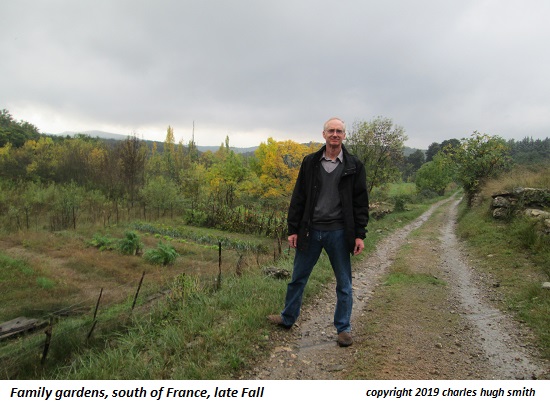