When Does This Travesty of a Mockery of a Sham Finally End?

Credit bubbles are not engines of sustainable employment, they are only engines of malinvestment and wealth destruction on a grand scale.

We all know the Status Quo's response to the global financial meltdown of 2008 has been a travesty of a mockery of a sham--smoke and mirrors, flimsy facades of "recovery," simulacrum "reforms," serial bubble-blowing and politically expedient can-kicking, all based on borrowing and printing trillions of dollars, yen, euros and yuan, quatloos, etc.

So when will the travesty of a mockery of a sham finally come to an end? Probably around 2022-25, with a few global crises and "saves" along the way to break up the monotony of devolution. The foundation of this forecast is this chart I prepared back in 2008 (below).

This is of course only a selection of cycles; many more may be active but these four give us a flavor of the confluence of crises ahead.

Cycles are not laws of Nature, of course; they are only records of previous periods of growth/excess/depletion/collapse, not predictions per se. Nonetheless their repetition reflects the systemic dynamic of growth, crisis and collapse, and so the study of cycles is instructive even though we stipulate they are not predictive.

What is predictable is the way systems tend to follow an S-curve of rapid growth with then tops out in excess, stagnates in depletion and then devolves or implodes. We can see all sorts of things topping out and entering depletion/collapse: financialization, the Savior State, Chinese credit expansion, oil production, student loan debt and so on.

Since each mechanism that burns out or implodes tends to be replaced with some other mechanism, this creates the recurring cycle of expansion / excess / depletion / collapse.

I plotted four long-wave cycles in the first chart:

1. The credit expansion/renunciation cycle. a.k.a. the Kondratieff cycle. Credit expands when credit is costly and invested in productive assets. Credit reaches excess when it is cheap and it's malinvested in speculation and stock buybacks, and as collateral vanishes then credit is renunciated/written off.

2. The generational cycle of four generations/80 years described in the seminal book The Fourth Turning. American history uncannily tracks an 80-year cycle of crises and profound transformation: 1860 (Civil War), 1940 (world war and global Empire) and next up to bat, 2020, the implosion of the debt-based Savior State and the financialized economy.

3. The 100-year cycle of inflation-deflation described in the masterful book The Great Wave: Price Revolutions and the Rhythm of History. The price of bread remained almost constant in Britain throughout the 19th century. In contrast, the 20th century has been characterized by inflation--the U.S. dollar has lost approximately 96% of its value since the early 20th century.

Another characteristic of this cycle is wage stagnation: people earn less even as costs of essentials rise, a dynamic that inevitably leads to political crisis and upheaval.

The end-game for inflation is destruction of fiat currencies, i.e. rising inflation or complete loss of faith in paper money. This is of course "impossible," just like World War I, the Titanic sinking, the global meltdown of 2008, etc. Impossible things happen with alarming regularity.

4. Peak oil, which does not mean the world runs out of oil, it simply means oil production no longer rises to meet demand and eventually declines even as new fields are brought online. It can also mean that the price of energy rises to the point that consumers can either buy energy or they can keep the consumer economy afloat, but they are no longer able to do both.

Many observers are confident that fracking and other technologies will enable current energy profligacy to continue unabated as the U.S. production of oil and natural gas soars. 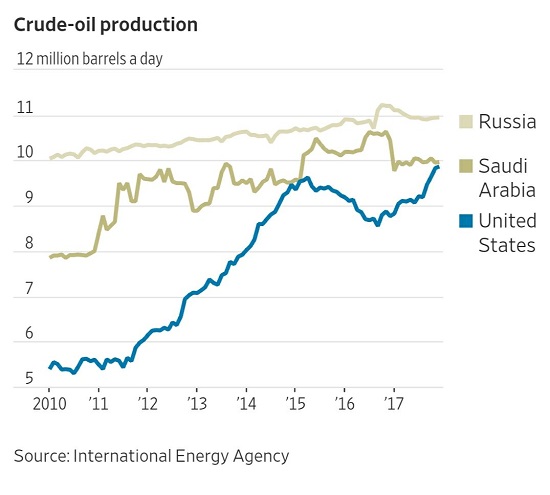 All this surplus energy in North America sounds wonderful, but that doesn't mean the world as a whole has escaped Peak Oil. Even if fracked wells didn't deplete in a year or two (they do), that expansion of production will not replace the loss of production as supergiant fields in Mexico, the North Sea and the Mideast enter the depletion phase. Yes, technology can extract more oil, but technology is costly. The days of cheap natural gas may have arrived, but the days of cheap oil are numbered.

How all this plays out is unknown, but even raising U.S. production might not be enough to maintain current production levels. Since several billion more people desire the U.S.-type lifestyle of energy profligacy, then what are the consequences of the mismatch between global demand and supply?

What happened to crude oil production after the first peak in 2005?

We can also posit that "good-paying jobs" in developed economies are also tracking an S-curve. The post-industrial decline in labor has many causes, but the Internet is a key factor going forward as the Web, AI, Big Data and mobile telephony leverage all sorts of productivity gains without the pesky overhead, costs and trouble of employees.

Once these bubbles have popped, the reality of long-term employment stagnation can no longer be masked.

Credit bubbles are not engines of sustainable employment, they are only engines of malinvestment and wealth destruction on a grand scale.

A number of other questions arise as we ponder these dynamics. How "cheap" will all that energy be to those without full-time jobs? How will 100 million workers support 100 million retirees, welfare recipients and parasitic Elites plus Universal Basic Income as costs rise, taxes soar and wages stagnate?

The Status Quo is unsustainable on a number of fundamental fronts. How long it can maintain the facade of stability and sustainability is unknown, but the global willingness to squander additional years on artifice and propaganda suggests that another four years will fly by and the end-game will be at hand whether we approve of it or not.

Thank you, Timothy T. ($5/month), for your superbly generous pledge to this site -- I am greatly honored by your support and readership.