The Black Swan Is a Drone

What was "possible" yesterday is now a low-cost proven capability, and the consequences are far from predictable.

Predictably, the mainstream media is serving up heaping portions of reassurances that the drone attacks on Saudi oil facilities are no big deal and full production will resume shortly. The obvious goal is to placate global markets fearful of an energy disruption that could tip a precarious global economy into recession.

The real impact isn't on short-term oil prices, it's on asymmetric warfare: the coordinated drone attack on Saudi oil facilities is a Black Swan event that is reverberating around the world, awakening copycats and exposing the impossibility of defending against low-cost drones of the sort anyone can buy.

(Some published estimates place the total cost of the 10 drones deployed in the strike at $15,000. Highly capable commercially available drones cost around $1,200 each.)

This is asymmetric warfare on a new scale: $20,000 of drones can wreak $20 million in damage and financial losses of $200 million--or $2 billion or $20 billion, if global markets are upended.

If it's impossible to defend against coordinated drone attacks, and impossible to differentiate "good" drones from "bad" drones, then the only reliable defense is to ban drones entirely from wide swaths of territory.

So much for the lightly regulated commercialization of drones.

What sort of light bulbs are going off in the minds of copycats? It doesn't take much imagination to see the potential for mayhem--and without sacrificing your own life. I won't elaborate on the possibilities here, but they're obvious to us all.

The range and payload of low-cost drones is limited. The big drones can fly hundreds of miles and carry hundreds of pounds of weaponry, but these can be targeted by radar and conventional ground-to-air missiles. So-called hobby drones skimming over the rooftops (or deserts or forests) are difficult to shoot down, especially if the attack is coordinated to arrive from multiple directions.

Small hobby drones may only carry 3 KG (roughly 6 pounds), but how much damage can 3 KG of high explosives cause? The answer is "considerable" if the target is flammable, or lightly shielded electronics.

Larger commercially available drones can carry up to 20 KG or 40 pounds--more than enough explosive capacity to take out any number of targets.

Defense and intelligence agencies have no doubt war-gamed the potential for coordinated drone attacks, and the world's advanced militaries are already exploring the potential for self-organizing "drone hordes" of hundreds or even thousands of drones overwhelming defenders with sheer numbers. The success of the oil facilities attack proves the effectiveness of much smaller scale drone attacks.

Put yourself in the shoes of those tasked with securing hundreds of miles of pipelines carrying oil and natural gas around the world. What's your defense against drone attacks? A.I.-controlled or remote-operated gun towers every few hundred yards, along thousands of miles of pipelines? Human patrols covering the entire pipeline 24/7? The cost of such defenses would burden the defenders with enormous costs without providing 100% reliable security. (Guards can be bribed, remotely operated guns can be overwhelmed by an initial wave of cheap unarmed hobby drones, etc.)

It's obvious there are no low-cost, effective defenses of thousands of miles of pipelines. (Recall that the Saudis depend on seawater being piped hundreds of kilometers into the desert to inject into oil wells to maintain production. Taking out these water lines and pumps would cripple production, too.)

The only effective way to limit drone attacks is to ban all drones and institute a shoot-on-sight policy in restricted areas. But that will not negate the potential for coordinated drone strikes or drone attacks on remote facilities.

The mainstream media will be under permanent pressure to downplay the consequences of this attack, but the cat is out of the bag: the Black Swan is a drone. What was "possible" yesterday is now a low-cost proven capability, and the consequences are far from predictable.

This unpredictability alone should unsettle markets, as the risk of future asymmetric warfare drone strikes just increased to a degree that is difficult to measure or hedge. 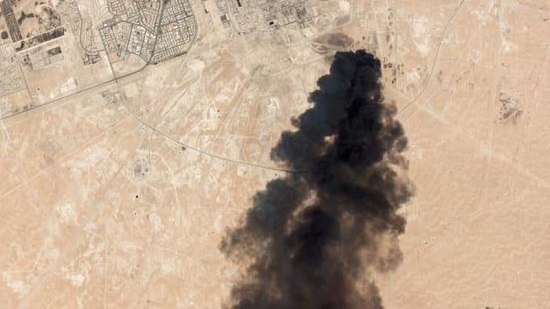