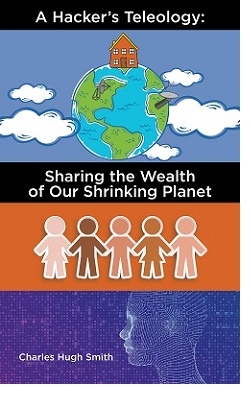 Since outlining the CLIME system in A Radically Beneficial World, I've struggled to find a way to describe its community economy and labor-backed cryptocurrency in terms that most people can grasp.

The first response of many is to dismiss CLIME as too idealistic to function in the real world.

What's interesting is that nobody says corporations are too idealistic to function in the real world, yet CLIME is a system of community owned and run corporations. The only difference between the two is the purpose and ownership.

Let's break down why corporations function so effectively.

Corporations have a defined structure but are free to pursue just about any project. This structure institutionalizes a hierarchy of accountability and oversight.

Corporations have a single goal: maximize profits by any means available. This goal provides the purpose and organizing principle for everyone in the corporation.

CLIME groups have the exact same fundamental characteristics. They are voluntary, institutionalize a structure of accountability and oversight, and have an organizing principle: address the needs and scarcities of the community.

The other difference is CLIME solves the problem inherent with profit-maximizing corporations. When corporations become monopolies, i.e. they gain control of supply and markets and use this control to increase profits at the expense of employees, suppliers and customers, they become exploitive. As we've seen, the most reliable way to become highly profitable is to establish a monopoly or shared monopoly (cartel).

Humanity desperately needs a fairer, more sustainable way of organizing human activity and my hope is this book is a small step toward that goal.

A Hacker's Teleology: Sharing the Wealth of Our Shrinking Planet

Excerpts from each of the book's sections (free PDF)