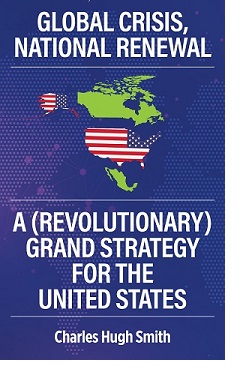 This book is the roadmap to Degrowth that we need to survive as a nation.

The core of the book is simple: the world has entered an era of scarcity that will collapse the status quo structures of nation-states and markets, both of which have been optimized for abundance, not scarcity.

I take a systems-level view of this global crisis, which boils down to: states, societies and markets are problem-solving structures, and when they lose the capacity to solve problems, they fail and are replaced with a more adaptive arrangement.

Viewed as systems, states and markets are inherently unstable: each fails not because of individuals' flaws or policy errors but as a result of their structure. If we don't change the system itself, failure is the only possible outcome.

The state is inherently corrupting as it concentrates power, which then attracts private wealth seeking to use the state's power to further its own interests. This extraordinary inequality of wealth and power is itself the problem, as it fatally undermines the economy and social order.

This system generates an elite which defends the status quo because it serves their interests. As the status quo fails to solve the problems of scarcity and inequality, this elite devotes its power to maintaining the system as-is, papering over problems rather than solving them.

Viewed as a system, both the state and society must co-evolve to solve systemic problems. If one resists or is incapable of adaptation, the nation fails.

The issue isn't ideological labels or principles, it's whether the state solves problems or covers them up with fake fixes that accelerate collapse.

Though I devote some analysis specifically to the U.S., the book is a template for any nation to not just survive scarcity but emerge stronger by evolving a degrowth economy and a decentralized political order.

These solutions will require profound changes in the social order, what I call the Social Ontology of beliefs, values, loyalties and goals.

We have an extraordinary opportunity to transform our unsustainable "waste is growth" economy and toxic socio-political orders to sustainable systems that optimize well-being rather than collapse. This book is a template for that transformation.


A Note on One-Star Reviews

Every author accepts that not every review will be glowing, and that critics improve one's work by pointing out weaknesses. In some ways, the more direct the criticism, the more helpful the critique.

In some cases, the author accepts the criticism as valid but feels the reader missed the point.

I confess that my writing is repetitive. I hammer on the same themes to excess. I try to limit repetition but much leaks through.

In this book, some of the repetition results from my attempt to show that the systems dynamics being discussed manifest in many places: it's not just one isolated dynamic, it's systemic. This is critical enough to justify some repetition in my view because this explains why the usual piecemeal policy tweaks beloved by reformers will fail: thay don't address the entire system, and so their effect in terms of saving the system from its fatal synergies is zero.

Take anti-trust regulations to limit monopolies. Limiting monopolies is essential, but if the system is corrupted by financialization and the purchase of politcal influence, then promoting anti-trust regulation as the solution is not really a solution. The entire system has be changed, or the existing corruption will simply co-opt all reforms.

Systems-wide changes can only arise of there is a social change in what the citizenry find acceptable. These changes only arise in crises. There is no way to generate a social revolution without crisis, and so long lists of policy-tweak reforms are useless. The only changes that will be consequential are those that change the system dynamics throughout all the intertwined subsystems: financial, economic, social and political.

I belabor some points because I anticipate many of the counter-arguments. One major point of the book is to explain why global markets have failed to discover the real price of resources, goods, services, risk, etc., and so they have failed at the most profound level. This upsets doctrinaire free-marketers who are then tempted to label me a Communist.

Never mind I see an essential role for decentralized, localized marketplaces. True-blue Communists must then dismiss me as a capitalist running dog, or worse. (See my essay The Community Economy Needs Its Own Money.)

In my defense, your Honor, I call it as I see it. There's no way to sugarcoat systemic failures with lengthy lists of the usual suspects of policy-tweak reforms. System failure leads to collapse. I see no point in offering false hope that the same old tired orthodoxies (markets and authoritarian states) can stave off collapse. Rather, clinging to orthodoxies and policy tweaks will accelerate collapse. Your Honor, I ask that we reconvene in five years (2027) and ten years (2032) to reconsider the verdict. Thank you.

Podcast discussing the book: A Grand Strategy to Address the Global Crisis (54 min., with Richard Bonugli)

In the realms of geopolitics and history, a nation-states blueprint to survive and thrive come what may is its Grand Strategy. The Grand Strategy may not have been formalized in ancient states, but it nonetheless found expression in geopolitical goals, military doctrine, cultural values and state institutions.

In our current era, discussions of Grand Strategy focus exclusively on geopolitics and military force. This narrow view is akin to studying the visible chunk of an iceberg and ignoring the greater bulk beneath its surface. The ultimate source of global influence is the nations domestic order: the resilience of its economy and society.

The central premises of this book are: (1) Grand Strategy is ultimately the pursuit of security in its broadest measure; and (2) the greatest threat to American security is the unraveling of the domestic order as the world enters an era of scarcity.

National Security is not just military force; providing citizens with the essentials of life without being dependent on other nations is the ultimate security. In an age of scarcity, energy and resource independence is security. Military power alone doesnt guarantee the populace will have the material foundations of well-being. That security requires a much broader framework than military power.

The purpose of this book is to describe the global crisis of scarcity facing all nation-states, explain why conventional policies will fail, and present a Grand Strategy that restructures the American nation-state into an island of coherence in a world of metastasizing instability.

This revolutionary Grand Strategy will be the deciding factor between nation-states that fail and the few (if any) that will not just survive but actually thrive.

All nations, including the United States, face systemic crises that are reinforcing each other at an explosive point in history. The threats to the republic and its global hegemony are unprecedented, but the status quo is incapable of understanding that conventional responses are an accelerant of inescapably fatal synergies: the status quo is now the problem rather than the solution.

These novel crises demand an entirely new Grand Strategy. The emergence of solutions is not pre-ordained; the collapse of the state is also a possibility, though far from an ideal one.

The global crisis of scarcity offers an opportunity to redraw Americas Grand Strategy from the ground up. Should we fail to make full use of this opportunity, the United States will fail, along with all the other nation-states that are incapable of redefining the problems so that new solutions become possible.

The state and society are symbiotic: neither can advance without the other. In some cases, society pulls the state forward; in other cases, the state pulls society forward. But neither can make a revolutionary leap without the other. The foundations of the status quo are breaking apart, and only those societies and states that make the leap together will survive.

As society awakens to the reality that the solutions of the past have failed, the state must have a blueprint for remaking itself into a solution that offers not just survival but security and well-being. This book is that blueprint.

1. How the American state has evolved from being a solution of beneficial synergies and adaptability to being a problem of fatal synergies driven by self-interest that cannot be resolved with existing policy tools or beliefs.

2. Conventional Grand Strategys focus on the economic and political realms ignores the three foundations of geopolitical power: access to energy, social order, and moral order. While the status quo views finance as the ultimate arbiter of economic strength, energy is the ultimate arbiter of all economic activity, including finance. In a similar fashion, the social and moral cohesion of a nations domestic order is the bedrock of geopolitical power.

3. The danger posed by hubris, the blind confidence that past glory ensures permanent success and an equally blind pride in Americas power. This hubris manifests as supreme confidence that the American state could never fail and existing policies will generate success without the need for any messy sacrifices.

This book views states as systems which must adapt as conditions change. Those states which fail to evolve quickly enough will fail and be replaced by another arrangement.

Part 1 focuses on why we have a global crisis:

In Section One, well focus on how Americas systems fail, including decaying social and moral orders

In Section Two, we go into detail about the reasons systems fail

Part 2 focuses on what we can do about the global crisis: