An Of Two Minds Essentialsm is a sharply focused discussion of one of the core issues of our era. While each is a stand-alone book (Kindle ebook and print), the Essentialssm shed light on the new socio-economic era we are entering. The Essentials are compact (less than 30,000 words) and affordable (less than $5 for ebooks and less than $10 for print editions). 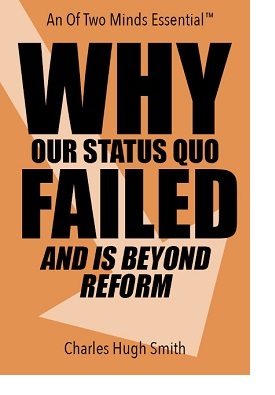 Our status quo  the pyramid of wealth and power dominated by the few at the top  has failed and is beyond reform.

This failure is not rooted in superficial issues such as politics or governmental regulations; the failure is structural.

The very foundation of the status quo has rotted away, and brushing on another coat of reformist paint will not save our societal house from collapse. Yet those who benefit from our status quo naturally deny it has failed, for the reason that it has yet to fail them personallyeither pretending to not understand all unsustainable systems eventually collapse, or hoping to postpone it.

The writing is on the wall for us to read:

Our status quo is not only failing to solve humanitys six core problemsit has become the problem.

Since this failure is now inevitable, something is coming to replace it. It is urgent that each of us understand why our status quo has failed, and why the usual menu of reforms cant stop this failure, so we can prepare ourselves for the radical transformations ahead.