Readers Journal has been updated. Check out 15 fascinating thought-provoking new comments and a new essay, On Capital Traps. 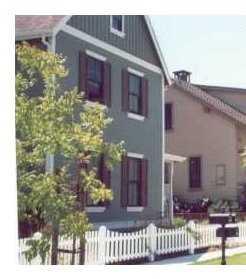 To those of you currently ensconsed in quiet, comfortable suburban America, the notion that the U.S. shares a number of disturbing traits with Third World countries might seem implausible or even insulting. But please read on before passing judgment.

Here are some key traits the U.S. shares with Third World nations--trends which are only growing more visible with each passing month:

1. Income and wealth inequality. One of the defining characteristics of Third World countries is extremes of income and wealth; a relative handful of families/elites control most of the property, wealth and "means of production" (wealth generating assets) while the majority of citizens own and earn essentially nothing.

Here in the U.S. it's not that visibly extreme, but facts are facts: a relative handful own the vast majority of key wealth-producing assets:

There is also another measure called the Gini coefficient. It measures the concentration of wealth at different percentile levels, and does an overall computation. It is an index that goes from zero to one, one being the most unequal. Wealth inequality in the United States has a Gini coefficient of .82, which is pretty close to the maximum level of inequality you can have.

A household in the middle — the median household — has wealth of about $62,000. $62,000 is not insignificant, but if you consider that the top 1 percent of households’ average wealth is $12.5 million, you can see what a difference there is in the distribution.

Things are even more concentrated if you exclude owner-occupied housing. It is nice to own a house and it provides all kinds of benefits, but it is not very liquid. You can’t really dispose of it, because you need some place to live.

The top 1 percent of families hold half of all non-home wealth.

The middle class’s major assets are their home, liquid assets like checking and savings accounts, CDs and money market funds, and pension accounts. For the average family, these assets make up 84 percent of their total wealth.

We are much more unequal than any other advanced industrial country.

Perhaps our closest rival in terms of inequality is Great Britain. But where the top 1% percent in this country own 38 percent of all wealth, in Great Britain it is more like 22 or 23 percent.

What is remarkable is that this was not always the case. Up until the early 1970s, the U.S. actually had lower wealth inequality than Great Britain, and even than a country like Sweden. But things have really turned around over the last 25 or 30 years. In fact, a lot of countries have experienced lessening wealth inequality over time. The U.S. is atypical in that inequality has risen so sharply over the last 25 or 30 years.

So what separates the U.S. from elite-owned Third World nations? Rather like the young lady who agrees to an evening with a wealthy stranger for $1 million, we've already established the inequality; the rest is mere haggling over the details.

2. The gutting of public services to pay burdensome interest on massive public debt. In the Third World, this process has been given an innocuous-sounding name by its enforcers, the World Bank and the IMF (International Monentary Fund): Structural Adjustment Program (SAP).

The world's bankers have long found it highly profitable to lend vast sums of "easy money" to Third World dictators, elites and kleptocrats, and then have their governments go in and forceably collect the interest when the overburdened borrowers defaulted. In 1904, President Theodore Roosevelt warned the European Powers not to land forces on Santo Domingo when it defaulted on its debts; instead, he sent U.S. forces to the customhouse to collect tariffs in order to pay the aggrieved European creditors.

In the current version of the game, the World Bank and the IMF require the debtor nations to agree to a Structural Adjustment Program, which slashes public spending in favor of interest payments to the western lenders. The U.S. Federal government has no limit on what it can borrow except the willingness of fools--oops I mean creditors--to keep lending it more money via buying its Treasury bonds.

But even with no limits on borrowing, the cost of the interest will soon squeeze Federal Spending. The interest on the Federal Debt is poised to exceed the cost of Medicare or even the Pentagon/Defense: $429 Billion according to the U.S. Treasury.

Unlike the Federal government, states, counties and cities cannot borrow unlimited amounts of money to fund their budget deficits. But states and various agencies have worked around this annoying limitation on their spending by selling "municipal bonds" which were theoretically designed to fund multi-year infrasructure projects. But in many cases, these have ended up funding expenses that have nothing to do with buildings, and of course the interest on this debt grows along with every new bond issued. And in California, that's billions more each and every year.

As recession slashes tax revenues at all levels of government, the interest on the stupendous public debts will eat up an ever-larger percentage of the public budgets, forcing cuts in payrolls and services--such as filling potholes and keeping libraries open. Welcome to the Structural Adjustment Program for the U.S.A. The Third World experienced massive declines in public welfare and infrastructure spending in the 1980s--now we will get a taste of the debt-induced belt-tightening ourselves.

3. The gutting of public services as public employee elites rally round their salaries, benefits and fiefdoms. One of the distinctions of a Third World economy is the extremely high premium placed on securing a government bureaucracy position, as these are essentially the only secure jobs in the entire country.

As the SAP slashes spending to pay the ever-increasing interest on debt, the public employee elites fight tooth and nail to maintain their perquisites, sacrificing public services to keep their security and benefits intact despite massive cuts in tax revenues. You will soon see libraries and fire stations closed, public health and recreation programs cut, etc.--but magically, the upper-echelon public payrolls will not decline.

Frequent contributor Michael Goodfellow sent in this article about fire battalion chiefs earning $270,000 a year in Silicon Valley--far more than the mayor.

Who is San Jose's highest-paid employee? You may be surprised:

Three other battalion chiefs were among the city's 10 highest-paid workers in 2007, with total cash compensation - excluding benefits - of up to $244,847.

The latest figures, requested by the Mercury News, come amid a heated City Hall debate over employee pay and benefits. Personnel costs account for two-thirds of the city's operating budget, which has been plagued by multimillion-dollar deficits.

And salaries have grown 38 percent since 2000, almost twice the cost of living increase reflected in the consumer price index. Mayor Chuck Reed has called for smaller raises, angering city unions.

This reads just like a Third World country, where the bureaucrats get twice the pay and immeasurably more pension and healthcare benefits than the average private worker.

4. Secure "formal" jobs are replaced with insecure "informal" jobs. You know the drill: fire all your salaried workers in a downsizing, then hire back the best as contract workers without benefits or pensions.

With secure permanent positions as rare as gold statues, laid-off workers take part-time jobs, or reluctantly enter the "informal" job market as handymen, babysitters, etc. On a societal-wide basis, this means the destruction of tens of millions of once-secure or relatively secure jobs, which are then replaced with completely insecure, informal jobs with no pension or healthcare protections/benefits.

Again, this is a primary characteristic of a Third World economy.

5. As the economy falters, a vast prison-state/gulag acts to control petty criminals and provide patronage-rich public-worker positions. Sell a gram of cocaine, go to jail for 25 years. The prison guards union is one of the most powerful and feared lobbying organizations in the state of California, surpassing even the mighty Teachers Union and trial lawyers for political power. More prisons? You can bet we need them....

6. As secure, decent-paying jobs vanish, the working poor turn to the Military for secure jobs with benefits. Over one million Americans have served "in theatre" in Iraq, and despite the grueling war there, the Armed Forces have met their recruitment goals in every category but retention of mid-rank officers-- chief petty officers, lieutenants and captains (Army and Marines). Where else can you nail down $50,000 - $60,000 in benefits and earn cash re-enlistment bonuses? And in 20 years, you'll have earned a bulletproof pension and Veterans Administration benefits--oh, and if you haven't noticed, the VA is now the best-run large-scale medical services organization in the U.S.

(That is not to say there haven't been hellish stories from wounded Iraq-War vets; but some of these problems stem from the tangled, snafu-ridden "hand-off" of the wounded from active-duty U.S. Military facilities to long-term VA care.)

7. Top-level public education is increasingly expensive and thus increasingly out of reach for average citizens's offspring. Since when did students have to borrow tens of thousands of dollars to attend public universities?

It's time to overhaul Prop. 13 to save state:

University of California students now contribute $1 for every $2 the state chips in - in the mid-'60s, that ratio was 1 to 19. When I was at Cal in the late 1960s, student loans were almost nonexistent, but now the average annual cost of attending UC is nearly $24,000 a year, and half the students have to take out loans to graduate.

It's hard to believe now, but in the pre-Prop. 13 era, public support for higher education was taken as a given - not just in the flush 1960s, but in much leaner times. In 1933, when California Gov. James Rolph proposed cutting UC's budget, the UC Regents protested that he was breaking faith with the people, and UC President Robert Gordon Sproul responded with words that have a tragic relevance today: "When a state prunes too severely the intellectual life at the top, it produces increasing poverty and despair at the bottom."

From 1/19 to 1/2--that's quite a shifting of costs from taxpayers to students. This too is Third World, where even public education costs more than most people can pay without going deep into debt.

Put this all together and what do you have? A nation which clearly shares key characteristics with oft-maligned Third World "basketcase" nations which are wallowing in debt, unfilled potholes, overflowing prisons and declining public-sector services.

Does that mean the U.S. is a Third World state? Of course not; but the above trends should raise our collective awareness of the risks ahead.

For more on SAPs and the structural changes they triggered in the Third World, please read Planet of Slums

Thank you, Jeff O. ($100), for your stunningly generous contribution to this humble site. I am greatly honored by your support and readership. All contributors are listed below in acknowledgement of my gratitude.