The Real Cyprus Template reveals the core-periphery Neocolonial-Financialization Model in all its predatory glory.

Much has been said about "the Cyprus Template" (the so-called bail-in, where deposits are expropriated to recapitalize the insolvent banks), but virtually nothing has been written about the Real Cyprus Template.

Longtime correspondent David P. (proprietor of Market Daily Briefing) charted some very interesting data that enables us to follow the money--specifically, Eurozone money in the "foreign deposit sources" (deposits in Cyprus banks that originated from outside Cyprus).

It appears the key preliminary step of the Real Cyprus Template is that money-center banks in Germany and other "core" Eurozone nations pull their money out of the soon-to-implode "periphery" nation's banks before the banking crisis is announced.

As David observed, "I think this explains a lot about something that has always puzzled me: why the delay in resolving Cyprus after the Greek haircut?"

"The Cyprus situation had been simmering for at least a year when in March of 2013 it finally broke; Cyprus had a week to take care of its banking situation or else face a cutoff of access to the eurosystem by the ECB. This brought matters to a head; the Cyprus Bail-In was finally settled upon, where uninsured depositors in the two largest banks in Cyprus took major haircuts, and must wait for return of their money until the assets of the banks are run down.

The banking problems in Cyprus had their roots in the Greek Sovereign Default, and were known by the general public for about a year prior to the recent default; a New York Times article dated April 11, 2012 lays out the particulars.

Looking at Cyprus bank security assets in data provided by the ECB, the problems were visible earlier - right after the first Greek haircut in mid 2011, and a second haircut finalized in early 2012. This was a 11 billion euro hole in a system with 100 billion in assets total, centered upon two banks that held half the deposits in the system.

You can see the effects of the increasing haircuts in the chart below. The chart lists all types of bonds owned by all the banks on Cyprus. The red line is the important one. It shows "all off-island Eurozone Government Bonds." 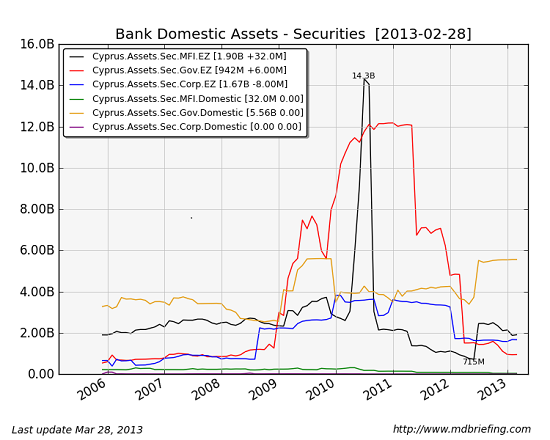 So why did the eurozone wait so long to resolve the problematic Cypriot banks with their 11 billion euro hole that was clearly serious in the middle of 2011, and becoming blindingly obvious by 2012? Therein lies a story - it has to do with banking, and how banks make money. The explanation is a bit complicated, but bear with me.

Bank deposits are grouped into 3 primary categories: deposits from households, from corporations, and from other banks. Households and corporations typically have a long standing relationship with their bank; they only move their deposits slowly, and most of this sort of depositor uses time deposits to maximize their interest income. Deposits from other banks are what we might term "hot money." They arrive quickly, and depart just as fast. But why would a bank deposit money with another bank? The simple explanation is: interest rate spreads.

Let's imagine you ran a German bank, and you paid very low rates to your overnight depositors. You have a great deal of really cheap money on your hands. What are your options to make money? You can either loan money to German homeowners one by one, but there are only so many German homeowners, and they only want to borrow so much money. So after loaning all you can loan, you search the world to try and find another bank that is advertising high rates for deposit money, and you stumble on the banks in Cyprus.

Now then, if the Bank of Cyprus doesn't go under, this is free money. How much are we talking about? Subtract the rate for the overnight deposit in Germany from the time deposit on Cyprus (4.9 - 0.55) then multiply by 60 billion euros. That ends up being 2.61 billion euros in profit. Per year! Cost? One guy at a computer hitting the "transfer" button on his keyboard in Dusseldorf!

This sure beats trying to loan money to a bunch of German homeowners one by one! But the key to this free money is, your bank must be able to get its money out of Cyprus prior to any trouble.

And the barrier to getting the bank's money back is those Time Deposits (the deposits paying the most interest) are stuck in Cyprus for a year. So in order to avoid loss, you have to see into the future one year and stop rolling your bank's time deposits one year before those Cyprus banks go under. Otherwise you will have collected that 4.9%, then suffered a 30-60% uninsured depositor haircut. And a haircut is not a good way to ensure your banker bonus for the year.

So with this hypothetical strategy in mind and being mindful of the dangers of default and the timeline of when things occurred, take a look at the following chart of "foreign deposit sources" (deposits in Cyprus banks that originated from outside Cyprus) and see for yourself how well each foreign participant did in anticipating the eventual banking system crisis. 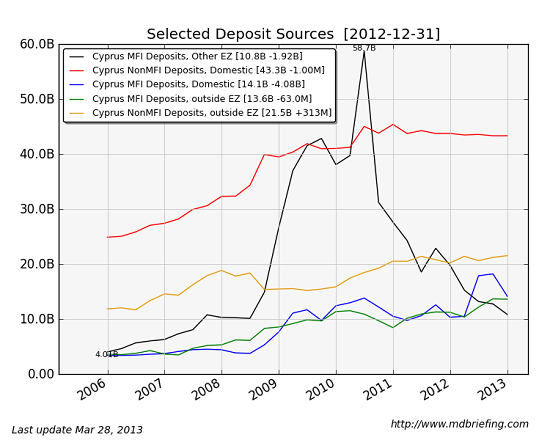 Looking at the timeline, even as late as the end of 2011, when it was clear Greece would default and the banking regulator had to know the banks in Cyprus were doomed, the amount of Eurozone-bank derived deposits in Cyprus was over 20 billion euros, a good portion of which would be subject to massive losses if the Cyprus Template were to be applied at that moment.

[Note that 20 billion euros was - at that time - the same size as the "Russian Mobster" Money.]

But at that moment, as a result of the "collecting the spread" strategy, some big chunk of that money were likely in time deposits, unable to be withdrawn. That money couldn't flee, not just yet.

But as time passed, those Eurozone bank deposits were slowly reduced down to 10 billion euros, a reduction of 50%. Presumably, as the time deposits expired, the money was brought back to the fatherland.

And then suddenly the President of Cyprus was informed he had 1 week to solve the banking situation that had been pending for more than a year.

In looking at the movement of capital prior to the default, we can give a grade to each participant, as a result of their apparent ability to assess the the danger to their deposits.

The clear winner: Eurozone Banks. Those guys were geniuses. They were the only participant to seriously reduce holdings prior to the default.

So it is expected (and a bit sad) that households and businesses don't leave their banks readily, so its not surprising they stayed on board right up until the end.

What is fascinating to me is that the banks that were NOT in the eurozone clearly had no idea what was coming, and the banks actually ON Cyprus only had an inkling, and that only at the last minute. Given both the timing and the form of the Cyprus bank resolution was in the hands of the ECB, as well as French and German politicians, is this astounding ability of the Eurozone banks to avoid losses truly a surprise?

One question that might be asked is, if the Eurozone banks knew what was going to happen, why not withdraw all their money from the banks on Cyprus?

First, only half the banking deposits on Cyprus were involved in the bail-in. Perhaps the 10 billion euros in remaining Cyprus-EZ bank deposits are in other healthy Cyprus banks. Another explanation is that only a subset of the eurozone banks were well-connected enough to receive advance information.

One last point. Since now we understand how perfectly the well-connected eurozone banking establishment identifies issues in member nation's banks, and how adept it is at avoiding uninsured depositor haircuts, we might find it useful to watch deposit flows of these Eurozone banks going forward.

They might well provide us insight as to where the next set of banking issues might arise, and perhaps more importantly, what the timing of these issues."


Thank you, David, for sharing your finding with us. We can now see there are two Cyprus Templates:

2. The real one, that enables "core" eurozone banks to pull their deposits out of periphery banks before the deposit expropriation and capital controls kick in.

Why are we not surprised the entire charade and expropriation is rigged to benefit the core banks? For more on the core/periphery structure of the Eurozone, please read The E.U., Neofeudalism and the Neocolonial-Financialization Model (May 24, 2012)

To fully understand the Eurozone's financial-debt crisis, we must dig through the artifice, obfuscation and propaganda to the real dynamics of Europe's "new feudalism," the Neocolonial-Financialization Model.


NOTE: gifts/contributions are acknowledged in the order received. Your name and email remain confidential and will not be given to any other individual, company or agency.
Thank you, Russell J. ($5/month), for your most-excellently generous subscription to this site --I am greatly honored by your support and readership.