If things fail from the periphery to the core, perhaps dominoes fall that way, too.

Wondering which dominoes are next to fall in Europe? Correspondent David P. provides a list based on a simple but powerful precept: follow the smart money. In this case, the smart money entered the at-risk banking sector of a particular nation to skim the fat premium offered by its higher interest rates--rates that reflected the higher risk. The smart money then exits the nations' banking sector before the inevitable solvency crisis triggers capital controls and depositor expropriations (the comically misleading "bail-in").

Why is any money left in at-risk periphery banks? David and I discussed two dynamics.

1. "The Chasing of Yield in a Time of Financial Repression. People chase those nickels, and since nobody (had) yet been hit by the steamroller, it was all fun and games. A good chunk of them are in time deposits, and now they can't escape. And a decent chunk is local money, too."

3. The crisis has been averted or pushed forward into the future. Large depositors undoubtedly recognized the risk but likely reckoned that the European Central Bank's remarkable success at kicking the debt-crisis can down the road would stave off any real crisis indefinitely.

As we saw in The Real Cyprus Template (the one you're not supposed to notice), once the smart money exits the at-risk banking sector, it is allowed to fall. This suggests that one way to identify which dominoes are likely to fall next is to look at the smart money's deposits in each nation's banks.

If the smart money has pulled most of its capital out, ECB and Eurozone authorities have a diminishing stake in propping up the domino. As a result, its fall becomes increasingly likely.

Here is David's commentary and accompanying charts of seven European nations. I have arranged David's charts in a roughly periphery-to-core order.

In Cyprus, one group of depositors seemed to have the inside track on the danger of remaining as an "uninsured depositor" in the two big Cypriot banks. That group, for Cyprus, is classified by the ECB's statistics group using a long and incomprehensible ECB series name - BSI.Q.CY.N.A.L20.A.1.U5.1000.Z01.E. Here's a link if you are interested in the raw data. Translated into English, this is basically "Eurozone Banks outside Cyprus." Or more succinctly put, Smart Money.

So what is that group is doing in other eurozone nations? We are not going to monitor every nation, rather, only the ones where Smart Money could conceivably make a decent profit by being there. This is quantified by the interest rate differential.

In the charts below, the black line represents the percentage of total deposits in that country that come from Smart Money. The lower the percentage, the lower the damage to Smart Money from any default. And one thing we've learned since 2008 is, core nation politicians will not hesitate to throw any peripheral nation under the bus in order to avoid any losses to Smart Money. The red line is the interest rate spread - the higher the number is above 0, the more profitable it is for Smart Money to remain. So if its profitable, and Smart Money is for some reason fleeing, you might want to pay attention! Regardless, if Smart Money is mostly gone, that means the people in charge of the Eurosystem can pull the plug on the country's banking system at any time without fear of loss to their own banking system.

First is Cyprus, to provide an example of what a deposit situation looks like when the core system political class feels comfortable torpedoing a periphery banking system. 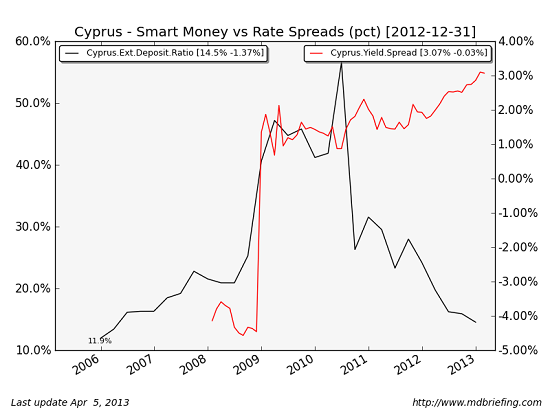 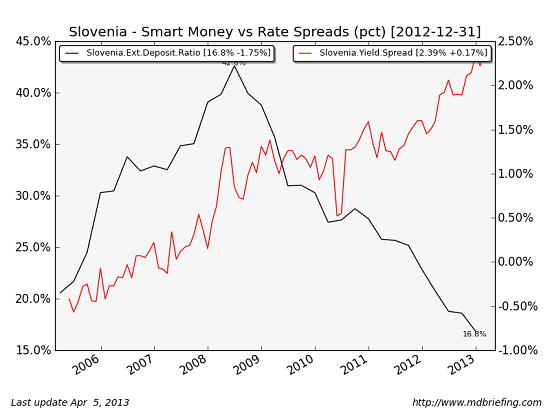 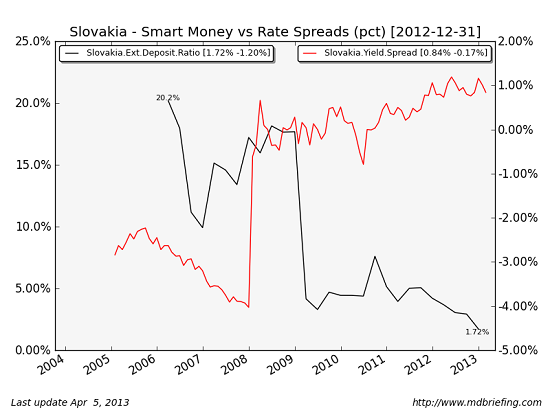 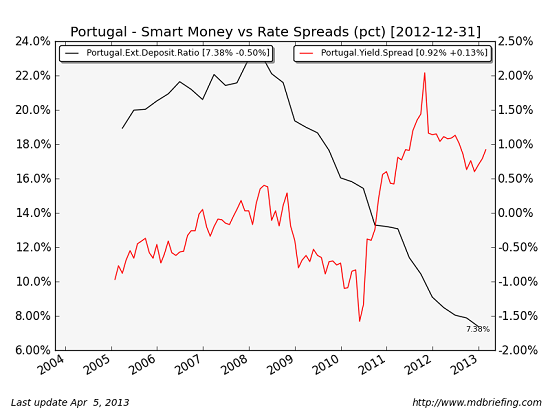 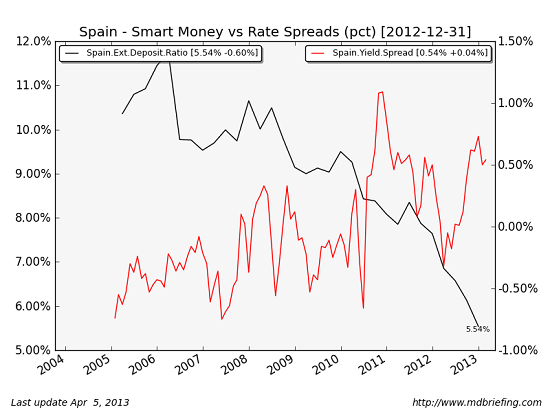 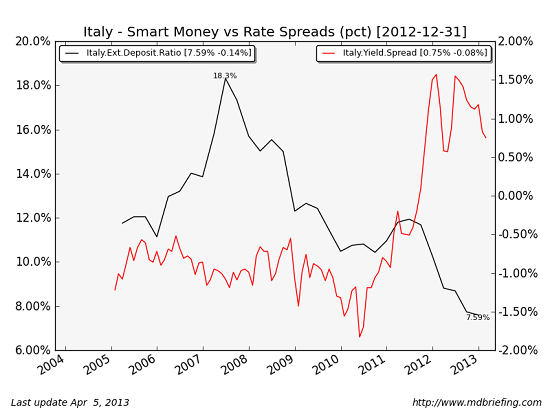 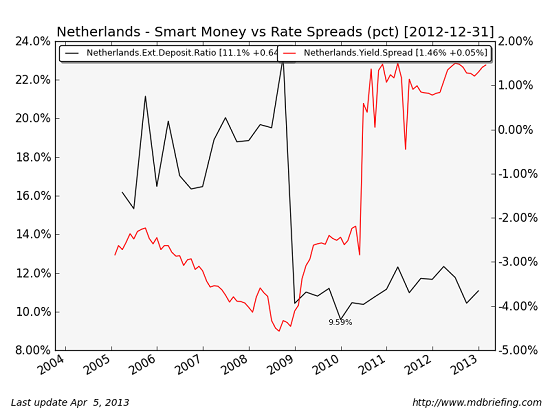 Thank you, David, for the commentary and charts. As David observed in our email exchange, "Things fail from the periphery to the core." With this in mind, we might arrange the dominoes in this order: Slovenia, Portugal, Malta, and then Spain.

Though Spain and Italy are considered core E.U. nations, we should probably differentiate between political and financial cores and peripheries. Should a self-reinforcing crisis of liquidity, solvency and loss of trust gather momentum, Italy's debt situation could reach critical mass, regardless of its political status as a core nation.

Similar political and financial crises could arise in The Netherlands and France,too, though these crises will probably not be triggered by an exit of core-EU mobile capital.


Special "the end of the world as we know it" sale on seeds from our longtime supplier Everlasting Seeds:


In light of the calamitous predictions regarding the Global Coastal Event [Clif High], Korean Nuclear tensions, and Solar/EMPs Kill Shot {Ed Dames}, we thought we'd offer folks the largest discount we've ever given. We're not 'fortune tellers' here, or Seers, or 'Intuitives': but if even ONE of these predictions come to pass, it'll definitely make for a 'bad hair day' {week/month/year...} for all of us...


NOTE: gifts/contributions are acknowledged in the order received. Your name and email remain confidential and will not be given to any other individual, company or agency.
Thank you, Quentin V.T. ($5/month), for your splendidly generous subscription to this site -- I am greatly honored by your support and readership.